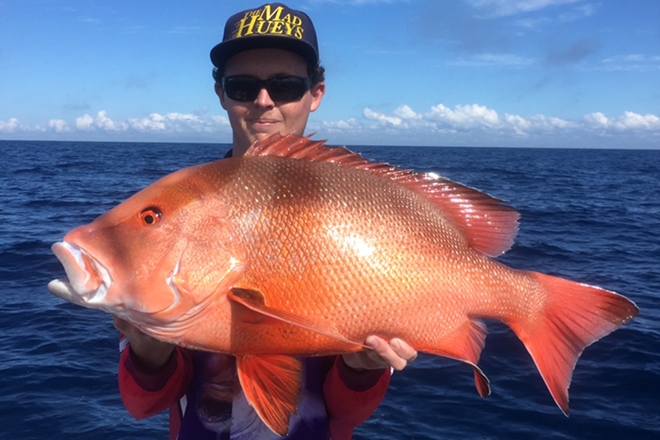 Mitch Beyer with the solid red emperor he caught off Bundaberg recently.

This weekend the annual VMR Bundaberg Family Fishing Classic will be held at Burnett Heads, and at this stage the forecast is looking fantastic to get out and have a fish, and try to win some of the many prizes in this year’s competition.

The Burnett River has been fishing very well over the past few weeks.  The amount of bait and prawns in the river is drawing plenty of larger species further upstream chasing a feed.  These species include flathead, bream, blue salmon and grunter.

It’s great to see good numbers of flathead back in the Burnett.  Just keep in mind there is a maximum size limit of 75cm on flathead.  Fish over 75cm cannot be weighed in at this year’s VMR Family Fishing Classic.

Good numbers of bream are throughout this magic system.  Bream have been caught on both soft plastics and baits such as white bait, mullet fillets, prawns and fresh yabbies.  The bigger bream have been holding around the many rock walls in the Burnett.

The other species that has everyone excited has been the blue salmon.  The two hot spots in the Burnett have been around the Fairymead Bend and in the Town Reach.  Make sure your gear is up to scratch, as once hooked these blue salmon fight hard.  Most anglers have had success using soft and hard style vibes fished towards the bottom.  Better numbers of blue salmon seem to fire up around one hour either side of the high tide.

It seems the secret has got out with the prawns right throughout the Burnett River, with most people managing to catch their bag limit of 10 litres for each person who can throw a cast net.  The larger prawns seem to be down towards the mouth of the river.

A few mud crabs have also fired up last week around the Bundaberg area, so it should be worth dusting off the pots as the crabs that have been caught have all been full and of good size.

Just finally, good luck to everyone entering in the VMR Bundaberg Family Fishing Classic this weekend  Most of the Tackle World Team will be out on the water, so we all look forward to catching up with everyone either on the water or back at the presentations having a cool beverage.