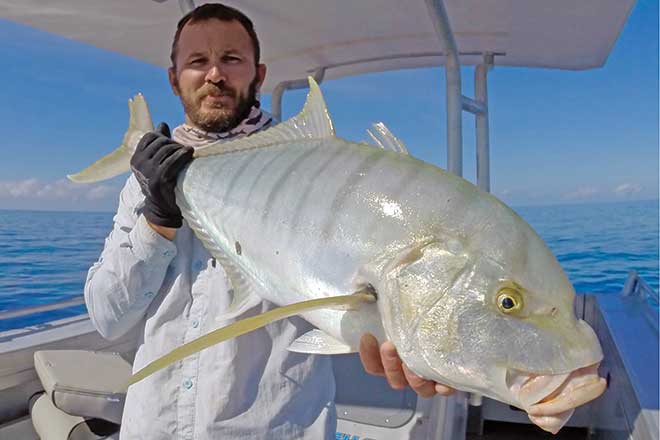 Wayne and one of many golden trevally taken during three days of sportfishing madness.

GOOD weather happened to align with Ben and Wayne’s three-day sportfishing package where the boys wanted to chase big GTs and pretty much anything that would pull their arms off on topwater lures and micro jigs.

Hinchinbrook Island was blessed with beautiful light to variable wind and glassed-out conditions. Boy, it’s a relief after having what felt like an eternity of 15-20 knot wind and rough conditions.

On the first day, I picked up the boys from the jetty and headed towards the Palm Island group with the sun just coming up and not a breath of wind on the glassed-out ocean. What a morning! We headed to a pressure point on one of the islands and chased GTs on topwater lures and it didn’t take long for Ben to hook up to a 20kg-plus GT.

After an explosive take and line screaming off the reel, the GT unfortunately ended up back in the structure, taking one of Ben’s prized poppers with it, much to Ben’s disgust. We continued to fish on, with Wayne catching a 15kg spanish mackerel on a popper and the boys boating a few smaller GTs and hooking a couple of better ones that found every way to bust them up.

It can be quite frustrating when you are getting the bites but are unable to capitalise. It was a blast nevertheless. We then headed offshore to a location I haven’t fished for a while due to the wild weather. We pulled up on the spot and found a massive show on the Furuno sounder. The fish were stacked up so thick in 30m of water that we could look over the side of the boat and see the fish swimming around in circles below us.

It was amazing. After a few double hook-ups on cracker golden and gold-spotted trevally, the taxmen moved in. God, I hate sharks! After losing two or three fish in a row, it was time to move on. It’s hard to leave so many fish behind but it’s even harder to feed quality fish to sharks. So we moved back in to another little rock that was also loaded with golden, tea-leaf and gold-spotted trevally.

We fished here for the rest of the afternoon, with multiple double hook-ups, screaming drags and plenty of laughter. The next morning, we headed north, fishing topwater again for GTs. Almost immediately, the boys hooked up to an absolute monster that made a splash like someone dropped a car in the water when it took the stickbait.
Unfortunately, it dusted Wayne up. They hooked another half a dozen GTs but again were unlucky with pulled hooks and bust-offs. It was a bit of a hard luck story really, but the boys’ spirits were still high and they were enjoying the challenge, with big queenies around the 1.2m mark keeping them amused. We headed out to another spot next, throwing poppers over another bommie where we only had one follow.

It was pretty quiet, so we moved out to the reef edges but found no bait. No fusiliers, no garfish, just lifeless, so we promptly moved on to do some micro jigging. The boys were having the jigging session of their lives, with every drop resulting in a hook-up. Both lads had their rods bent for almost the rest of the day.

The third and final morning of their trip again dawned as a picture-perfect day with glassed-out conditions. We went chasing GTs on poppers in the morning, with Wayne again getting absolutely owned by a monster GT on the very first cast with a stickbait. It was a fun and action-packed morning, with quite a few smaller GTs around 10kg and some big queenies hitting the deck.

Again, a couple of really big fish managed to find a way not to be caught but the boys loved it all the same. In the afternoon we headed out to do some deepwater micro jigging and the boys had a blast catching donkey golden trevally, solid tea-leaf trevs and huge gold-spots. It was great to just concentrate on sportfishing with stickbaits, poppers and micro jigs for anything that would pull your arms off.

Surface fishing is so visual, with massive explosive strikes and the ability to see fish chasing after your lure, swiping at it, following it all the way back to the boat and sometimes smashing it just as you’re about to lift the lure out of the water. Micro jigging is so much fun too, with the fish hitting the jigs so hard and then fighting like demons all the way back to the boat.

Unfortunately the truly big GTs eluded us on this trip, but that’s fishing. However, I’m sure you’ll agree after looking at the photos that the boys caught fantastic trophy fish and those bigger ones will be even bigger next year.

Well done to Ben and Wayne for fishing hard for three days because working poppers and jigs isn’t easy, especially when you are catching a fish a cast.
Until next month…