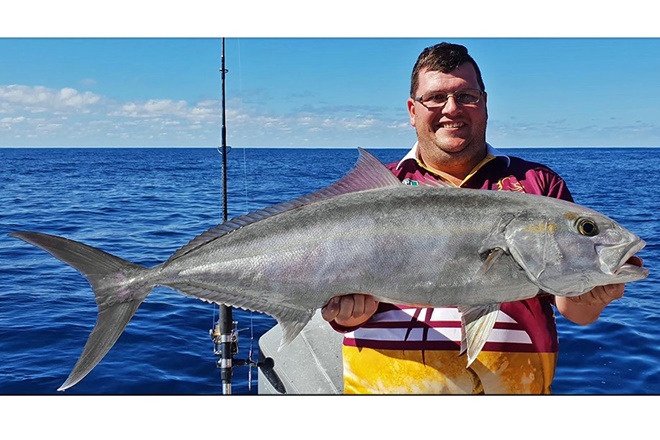 Blood moon brings on the fish

In the run up to a blood moon the big tides saw the fish feeding well early in the week with the afternoon the better time to fish toward the weekend. In the river smaller flathead have been caught around the river mouth and the gutters to the Noosa side (south side) of the main channel. Light leaders and small vibes have been producing some great medium sized fish. Try using Entice Assault vibes and Ecogear ZX blades. If using bait then use light gauge gang hooks with whole whitebait or hardy heads. The sunken trees around the dog beach have been holding some larger bream and flathead. To target these fish try casting lightly weighted grub tail plastics like Berkley Gulp swimming mullet and Zman grubs into the structure and letting them slowly sink downward and wait for the hit. Around Woods Bay, Munna Bridge, Munna Point and the frying pan the surface bite has been producing a mixed bag of smaller GT, bigeye trevally and the odd chopper tailer. Lures to use include Strada Zeida, Cultiva zip’n’ziggy and the mid-sized Bassday Sugapens with upgraded hooks. These lures emit a great action when worked with softer tipped lighter rods which these fish just love to smash. Baits to use include, whitebait, pilchard chunks, mullet strip and peeled prawn baits on running sinker rigs. Further up river, between the ski run and toward the stretch known as between the lakes smaller or soapie sized Jewfish have been getting caught on well presented paddle tail and jerk shad plastics coated in scent. The Entice Bungy baits range has been producing some nice fish when worked slowly with long pauses. Pro-cure scent has been helping create that extra bit of interest when applied to soft plastics. This can be the difference between success and failure during a slow bite period when the fish aren’t fully committing. Be sure to strike hard on these fish as they love to run and then simply drop the hook.

In the freshwater the Hot Bite Gangbanger lures have been pulling in some great fish at Lake MacDonald. Try using these lures around the bubble trail and in the deeper waters where you can troll them along the drop offs. These lures are now back in stock so grab them while you can. Borumba is still producing smaller saratoga and nice sized bass. Get up into the Kingham and Yabba Creek arms during lighter wind times, set your electric motor on speed 1 and enjoy casting various spinnerbaits, blades, vibes, and of course surface lures in low light times to get the best from the area.

Offshore the lack of swell and light westerly winds have been with us most of the week. If you owned a boat it was time to cross in almost perfect conditions. With the entire ocean on offer, larger boats were headed to Double Island, Barwon banks and various deep water marks. Fish caught included quality Cobia of Black Kingfish, standout snapper, spanish mackerel, pearl perch, longtail tuna, venus tusk fish and the odd red emperor. The majority of fish were taking live baits and fresh dead baits fished on paternoster rigs. In closer around North reef, Chardons reef and Sunshine reef anglers were catching a mixed bag of reef fish including snapper, cobia, sweetlip, estuary and maori cod, venus tusk fish, pearl perch and longtail tuna. Soft plastics in the 5-7 inch size working very well especially jerk shad style which allows for fast decent especially when drifting. Have a look at Zman scented jerk shads and Chasebaits 5 and 7 inch fork baits on 5/0-6/0 jigheads and 30-40lb leaders. Be sure when on anchor to run a steady burley trail and have light gang hook pilchards drifting down. This should consist of a burly log and pellets or cubed pilchards thrown over the side every minute or so. Be sure to keep the trail consistent and free from big cubes as you don’t want to feed the fish. Tuna oil mixed in with ground up pilchards or burley pellets creates a great scent trail to help lure in those bigger mid water fish.

On the Beaches, Bream were on the bite in the gutters around Sunshine Beach towards the top of the tide over the last week. Flathead have also been in the gutters taking frog mouth pilchards on gang hooks, as well as fresh mullet strips. Dart are still spread all along the beaches with the top of the tide the most productive. Great fun for the kids is to get them casting metal lures like the Halco twisty’s, the way the dart are at the moment they will hit a fast moving slug with the added benefit of tailor and trevally also in the same area.