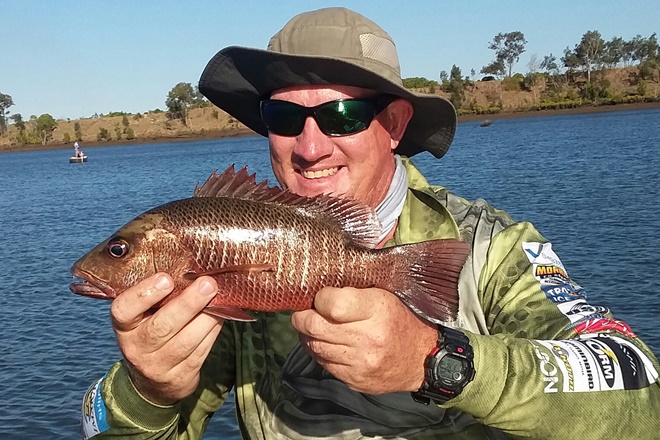 Dale Smith with the mangrove jack he caught in the Burnett River last weekend.

Cracking weekend ahead around Bundaberg

Finally, the stable winter patterns have arrived for the Bundaberg area and it’s looking like another reasonable forecast for an offshore run.  If the fishing remains as good as it has been, it will be another cracking weekend!  Areas such as the gutters have been producing some big coral trout, mainly on live baits.  There is also plenty of parrot, snapper and an odd red emperor.  The outer atolls and islands are producing heaps of coral trout, red throat sweetlip, parrot and some monster red emperor.  There is also plenty of cobia and mackerel about to keep you entertained.

Well, we are just off the back of a full moon and the tides are starting to get smaller, making the inshore reefs easier to fish.  Plenty of snapper, grunter and big grass sweetlip have been caught.  The Cochrane Artificial Reef off Elliott Heads has been a hot spot.  Fishing lightly weighted baits such as pillies or yakka fillets has been the go, or using soft vibe lures and lightly weighted soft plastics with the Berkley 5” and 7” Jerkshads working best.

The good old Burnett still continues to produce plenty of fish.  The mouth has seen plenty of tailor and small school mackerel.  Trolling small deep diving hard bodies has been successful with the Tilsan Barra Minnow working the best.  All the rock walls are holding plenty of big bream and cod.  There are a few big grunter and salmon along the channel drop-offs and also plenty of whiting and flathead on the sand flats.   The Town Reach still has a few blue salmon and small trevally about, with Blade lures working really well.

The mouths of both the Baffle and Kolan systems are still producing a few big tailor and a few big queenfish.  The sand flats have held plenty of whiting, bream and flathead with the first of the making tide being best.  A few of the deeper holes and rock bars are still holding a few mangrove jack and a few blue salmon.  Using live poddy mullet for bait seems to be the go.

There is still a good number of whiting and dart around the mouth of the Elliott and out along the beach.  Pippies or beach worms are the go. There is plenty of flathead and bream about and an odd jack as well.

This little lake has really turned it on this week.  Even though the water levels are low, the fish are on the chew.  Most of the bass have been caught on the weed edges.  Bass up to 45cm have been common.  There was also a saratoga caught this week out there.  This is exciting news as they are a fantastic sports fish, and as the Bundaberg Sportsfishing Club continues to stock the lake with saratoga it will endeavour to become a hot spot for both bass and ‘toga in the future.