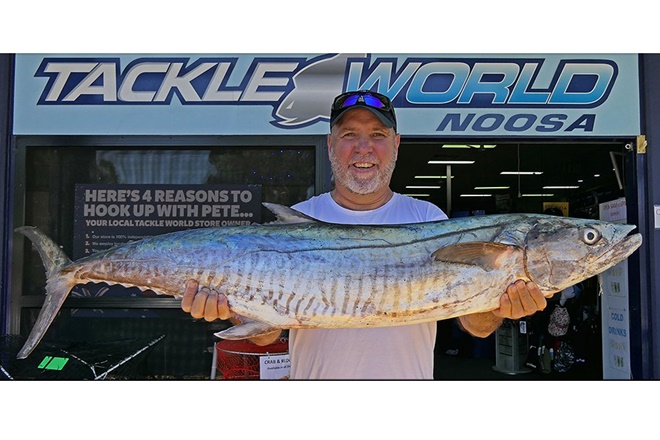 Sean van der Walt: Launched my kayak at Sunshine Beach and paddle trolled the reef for thirty minutes before my slimy mackerel bait was hit hard by this 13.5kg Spaniard. Photo: fishingnoosa.com.au

Finally the weather has broken and the swell is rapidly fading. This week we have seen 1-2 ft fading easterly swell combined with light north easterly winds which has seen everyone who owns a boat head out after the pelagic fish.

Crossing the bar has been a lot easier and the local reefs have been fishing well. Out wide North Reef has had a great mix of reef fish and pelagics including the main target, spanish mackerel. Also in the mix smaller cobia, sweetlip, pearl perch and longtail tuna.

Sunshine Reef has been the reef of choice for many boats due to the residual swell and stronger winds earlier in the week. Again the northern end has been the most popular with spanish mackerel and a few spotties in the mix. For those running reef rigs then coral trout, sweetlip, maori cod, pearl perch and some small yellow tail kingfish have been caught along with a few longtail tuna and small cobia.

In even closer around Halls Reef and Jew Shoal the kayak boys have been finding the horse sized spanish mackerel. These bigger solo fish have been hitting slow trolled whole fish baits including bonito, garfish and slimy mackerel baits. Don’t forget the spanish special lures are in stock and these combined with a big dead bait are a killer option.

Don’t forget if you are offshore make sure you have pilchard of slimy mackerel floated baits on gang hooks and use bait wrap to keep them in place. These have been working very well and will often find the bigger fish as they drift downward toward the bottom. With the stronger currents be sure to add a little extra weight to the nose of the bait and break out baitrunner style reels if you own them.

The surf fishing has been quiet but there are some quality gutters up and down the coast that have formed from the constant swell. The better times to fish are low light but during the daytime light rigs and beach worms are the go for whiting, bream, dart and flathead.

In the rivers, especially around the lower estuary marks of the Dog beach, River mouth and along Gympie Terrace the flathead have been showing up with some quality fish getting oversize. If you want to target one of the larger fish then live baits are the best way as are bigger lures. If able to fish at night then try larger barra style hardbodies from Jackson and Lucky Craft. These create a lot of vibration when slowly wound back that the big fish love.

Trevally are still terrorising the bait and early mornings in the Woods Bays, Munna Bridge and along Gympie Terrace around the frying pan. Make sure you have a surface walker like an Atomic K9 or even a Storm Chug Bug popper with you as these are some of the best options for the lure anglers. If out and about after the sun is up then try various sizes in the Keitech range of soft plastics as these are packed with scent and have a great action.

Mangrove jacks are still very much on the prowl and will hold under structure like pontoons and jetties during the daytime and come out for a feed during the dark. If after these apex predators then you best make sure you have the gear to stop them. Heavier lines and leaders are a must and a rod to match will all go toward trying to muscle one out of the structure. Take a look around the back of Noosa Sound and throw 3 inch Chasebaits paddle baits and Zman Diesel MinnowZ rigged on TT Headlockz for the best in weedless options.

Freshwater has been fishing well with early mornings providing some quality saratoga and bass for those anglers running surface lures. Bassday Sugapens, Lucky Craft Sammy 65 worked slowly are great options. If out at Lake MacDonald again be sure to try surface and head up into the various areas that are protected by the northerly winds during the last and first light times. Frogs are very much active toward the end of the day so try the various frog style lures. The new Jackall TN80’s are in stock and are sure to be a hit. Slow rolling and slow lifts are a very effective way to fish these lures.