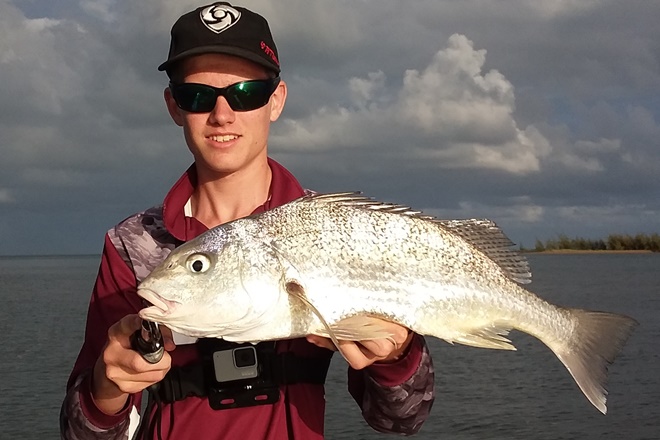 Matthew Smith with the 57cm grunter he caught in the Burnett River recently.

We were really lucky around the Bundaberg area that earlier in the week we had a small window of reasonable weather that allowed a few boats to head offshore.  Although the weather didn’t quite turn out as forecast, those who braved the conditions caught some quality fish, including coral trout, parrot, sweetlip and a few big cod.  There has been plenty of cobia and Spanish mackerel about also.  Trolling rigged baits such a gar and yellowtail has worked a treat on the big mackerel.  Trolling lures has also caught a few with the trusty old Halco Laser Pro 190 being the stand-out lure.

The trusty Burnett River keeps producing some great fishing.  The quality of the bream that are about for this time of year is outstanding.  They are big and plentiful and most have been caught along the rock walls.  The last moon saw some quality whiting caught on the flats.  There is still plenty of flathead about, as well as a few mangrove jack and some big grunter.  There is also a few mud crabs around, so it will be well worth the effort to throw in the pots.  Whole mullet seems to be the favoured bait and it will pay to move your pots about till you find where the crabs are.  There is a bit of prawn about also, and although small they are super tasty and well worth the effort.

Both the Baffle and the Kolan are fishing well, with the main catches being mangrove jack and big grunter.  Most of the jack have been caught on dead baits such as sprats, poddy mullet and strips of mullet fillet fished on the bottom around the rocky areas.  The big grunter are coming out of the deeper holes.  Using dead baits has also been the key to the big grunter with sprats and prawns being the go-to baits.  Both species have been caught on lures also with soft vibes and Berkley Gulp doing the damage.

There has been plenty of whiting in the Elliott, especially around the full moon, and worms and yabbies have been the go-to baits.  Further up the river has seen plenty of cod and mangrove jacks, mainly on live baits, and rumour has it that there is a few crabs about also.

Lake Monduran has been fishing red-hot for the past few weeks, with most people catching plenty of barra.  Five to ten barra per fishing session is not uncommon with some guys catching up to thirty barra for a weekend.  Small lures are still the key with Jackall Squirrels, Luckycraft Pointers and Rapala X Raps being the favourites.

The Bundaberg Toyota Golden Barra Competition at Lake Monduran has almost come to a close, with the final day being on 31st January 2019.  With only a week left, now is your last chance to have a go at landing the golden barra worth $15,000 cash. There is also a boat, motor and trailer package to be won for the white barra along with other prizes for three silver barra.  You need to register before you start fishing and you can do this at https://www.goldenbarra.com.au/ where you can also find the Terms and Conditions.