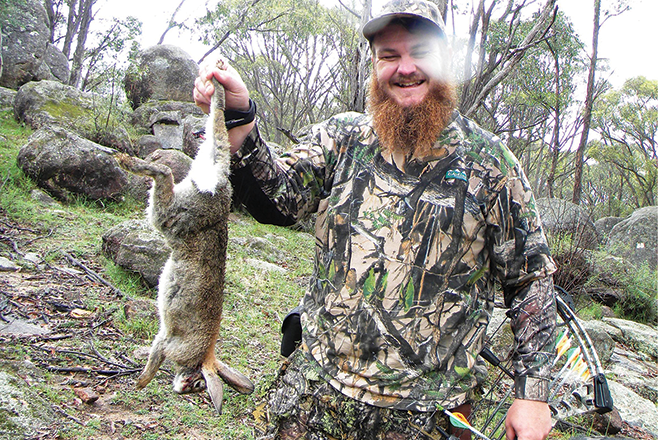 The author’s son Garrett with the much smaller European rabbit.

THERE may have been a few glum faces during June due to the rain and wind, but the rainfall was needed.

The Mary Valley has endured an extremely dry spell that has resulted in a number of bushfires, but June 4 had the local farmers dancing as the heavens opened.

If you stood still long enough you could watch the grass change from brown to green. As the land recovers, so do the animals, but this also unfortunately includes a number of pest species.  When we think of tilapia or carp in our waterways we instantly think of exterminating these pests but the thought of killing introduced mammals is sometimes a little harder for some to digest.

In the same way as carp destroy creek banks and drive out our native fish species, many ‘loveable’ introduced animals spread disease. My approach to the above problem is simply: if it’s on the declared pest species list and feral it’s in peril.

One such introduced species is the European hare, which is an inexpensive target species for those who cannot afford a high-end budget. Many guided tours exist for red and other deer species but with costs in the thousands they can be out of reach of many.

The humble hare is available on any acreage property within the Brisbane metro area and thrives right across our southeast Queensland region. It is a Class 1 pest, which means land holders are required to manage and help eradicate the species.

Not only do hares carry a number of diseases, they also cause significant damage to young native trees in a critical time of development. One female hare has the ability to produce four litters a year, each consisting of two to five young.

The European hare is most active in low-light periods from dusk through to dawn. Any species that uses the cover of darkness presents a number of problems for bowhunters.

Several products on the market will help the archer achieve results. The most obvious is the bow sight. I’m using a Trophy Ridge 5 Pin React, which like most modern-day products offers a combination of fibre optics and rheostat light.

Used in conjunction with a glow peep it allows the hunter to sight prey and release an arrow accurately towards the target in darkness. The more practice, the better the overall results. I’d like to add that this particular sight has the added feature of calculating your pins for distance accuracy.

It can be as simple as manually adjusting your first pin at 20m and the second at 30m. The gearing automatically aligns and brings pins three, four and five into 10m increments. If you decide to fine-tune your last 60m pin you are actually fine-tuning every pin and micro adjusting to provide even greater accuracy.

I was a little sceptical at first but I’m so glad I bought this product. Another important product is the illuminated nock that replaces the product usually supplied with factory-produced arrows. On firing, the force of the arrow releasing from the bowstring activates the nock to light up so the archer can track the arrow in flight right through to the impact point and eventually to where the arrow finally rests.

When you consider the most common location for bowhunting hare is heavily grassed open paddocks, broadhead choice is a very important consideration. I choose to use Zwickey Judo Points, which have four wire appendages that actually grab on tufts of grass and allow the arrow to settle on top of the foliage instead of burying and becoming another lost projectile.

They provide a hard-hitting impact that has the power to finish the job. The bowhunter will find the European hare a lot more robust and harder to succumb than the smaller common European rabbit.  Stalking a hare and getting within a close enough range can be a challenge due to the cautiousness and erratic speed of this animal.

When bowhunting hare around the full moon, closing in on your prey can be difficult due to the degree of visibility. It is important to use every advantage and stay in the shadows for concealment. Movement is less obvious in the shadows, especially when you wear darker clothing.

Any tree, shrub or structure will cast shadows on these moonlit nights, so think about your position and plan your approach. In Europe, the brown hare is considered a prized game animal and its strong, dark red flesh makes for excellent table fare.

I’m not sure if our Australian stock is as favourable on the table and to be honest I’ve never bothered to try. The hare is not to be confused with its smaller relative the European rabbit, which is also considered a pest species, especially in the northern NSW region.

While the common rabbit burrows underground, the hare spends its entire life above ground, even when nursing young. The common rabbit recently seems to have spiked in numbers around the New England region and residents of Tenterfield have reported the rodents appearing even in the main street, something that hasn’t been seen in years.

Both rabbit and hare make an inexpensive target for bowhunters but due to the availability of the hare all through the Brisbane region it provides a target species right on our major city’s doorstep.

Check out the Queensland Government’s declared pest animal list and find a range of other animals such as fox, wild dogs, deer, goats and pigs and take advantage of what’s on offer to you as a bowhunter.
Remember: hunting equates to conservation.
Cheers, Chief.