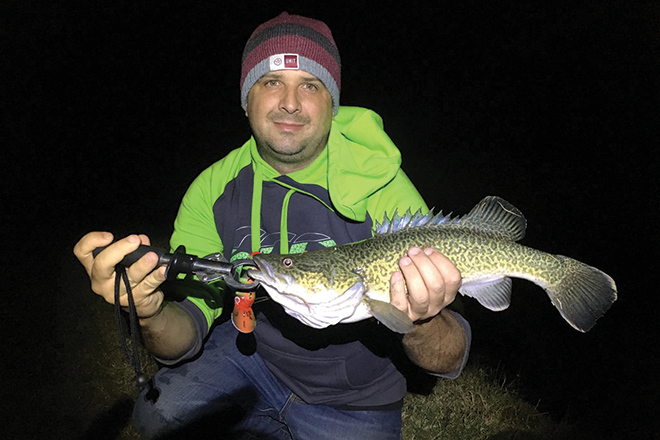 This little fish had a distinct marking on its cheek.

ON a recent Saturday afternoon my mate Simon and I decided to head south over the NSW border to Inverell to chase Murray cod.

As we neared our destination we passed over many waterways that not long ago held decent bodies of water. Now they were just small flowing streams that led to deeper sections. Drought had clearly taken its toll on the many rivers of this area. After arriving, around midnight we set off on foot along a section of Myall Creek under a full moon.

Heavy cloud cover made the night quite pleasant and you could have got away with wearing a T-shirt. I explained to Simon that with the area in drought the fish would hold in the shallows near flowing water, either on the edges of the bank or rocks, so as to ambush prey. The first flow we came to had a massive rock in the middle with only about 15cm of water surrounding it.

I prompted Simon to punch a cast in behind the rock on the edge of the flowing water and almost instantly he missed a ‘boof’ strike right beside the rock. The Jackall Pompadour lure had almost reached his feet when the following fish inhaled his lure on its second attempt. The Murray cod was a little on the light side but made the 70cm mark; a good fish for a shallow body of water.

I said “where there is one, there are more” as I shot a cast to the opposite side of the rock. After two turns of my baitcaster a 50cm fish nailed a Power Lures surface bug. This kicked off a great night’s fishing as Simon went on to land another three on the Pompadour while I picked up one more with a sight cast from a few metres away.

We had consistent action and dropped about half a dozen fish each, some right at our feet. We saw an 80cm model and both tried to entice it with our surface lures but it wasn’t interested. Upon closer inspection we discovered why: the forked tail of a carp of about 40cm was protruding from its mouth.

The next night saw us meet up with Jason from COD-X lures and our destination was the Gwydir River. We were hoping for a metre-long cod for Simon but it wasn’t to be. The fish were shut down, however we weren’t disappointed because the beautiful surrounds and crystal-clear water were so rewarding.

Not to mention an enjoyable discussion of Murray cod and lure making that added to our experience. When we arrived home in the wee hours of the morning it was bitterly cold and we sensed impending frost. We rose early to take advantage of the icy morning on Myall Creek.

If you know cod fishing, you will know a frost in the morning produces a good bite because it plays with the native fish’s metabolism. And cold it was. After two casts Simon gestured for me to come and have a look at his rod because the first two guides had frozen the line inside them, causing his reel to lock up.

Simon was fishing with my 3/8oz Cod Hound Spinnerbaits in green and purple and went on to catch two quality fish. Then after losing one to a snag he opted for my 5/8oz quad-spin model. A few dozen casts later the pink and purple cod spin had produced three fish over 50cm that presented with outstanding patterns and colours.

I stuck with my Power Lures surface bug, which is hands down my favourite surface/subsurface lure. It has a tight swinging action and with a very slow retrieve creates a nice surface wake. Speed up your retrieve a little and it will swim about 5cm under the surface, with an action you won’t replicate with any other lure.

It is truly unique. Bryan Power gifted me two of these lures on a cod tagging trip for NSW Department of Primary Industries Fisheries. Since then they have tangled with Murray cod in all our major river systems. I was so impressed with them I had him carve me another six.
They are perfect for shallow water and running over snags.

In the end I landed another three cod off the top in frosty conditions, all around the 50-60cm mark. This capped off an enjoyable experience fishing the Myall. Although we intended on fishing from our kayaks on bigger, vaster waterways, we didn’t end up getting them wet because the water wasn’t there and no one wants to be dragging their kayak through 800m dry sections.

Walking the bank tends to sharpen your casting abilities quite quickly because a bad cast will see lures disappearing in vegetation. I tell people all the time that native fish don’t need a massive body of water to flourish. They will readily inhabit shallow areas that most anglers would just walk past without even thinking of throwing a lure. I have seen metre-long Murray cod come out of a foot of water on numerous occasions, so don’t walk past those puddles or small flowing streams.

The entire length of a river presents opportunities to catch fish.

Wade is a freshwater fishing guide based in Toowoomba. He is the owner and operator of both Cod Hound Kayak Tours and Cod Hound Spinnerbaits, and hopes to share his knowledge of all things related to catching Australia’s iconic freshwater fish species.
Previous Bowhunting Hare in the Mary Valley
Next Tips on How to Catch Blackfish