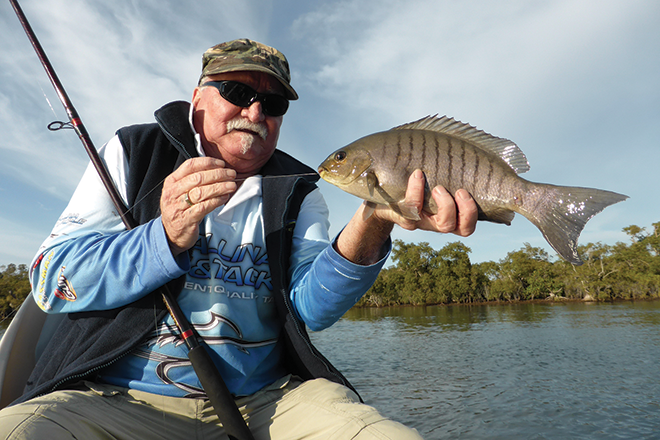 One of many blackfish landed that day.

Tips on How to Catch Blackfish

BLACKFISHING is an art and in this article I explain how to catch blackfish.

You don’t just pick up any rod and reel to fish for these feisty characters. Blackfish (luderick) fight well and truly above their weight and can also be as fussy as children when it comes to eating. They might like green weed one day and cabbage the next. Even prawns and yabbies can be on the menu depending on the time of year and water quality.

In dirty water after a flood, prawns and yabbies fished very lightly on a 1/0 hook can entice blackfish. In summer and autumn cabbage is best, and then as the water gets colder weed comes into its own. Blackfish will eat black, green (horse hair), cane drain, slime and red weed.
When it comes to tackle, to us traditionalists, you need the right gear for the job.

A centre-pin reel is really the only way to go but some anglers use a threadline reel. These reels are too difficult for me when blackfishing because if you have to peel out line you can end up in all sorts of trouble, especially if you need to strike and your bail arm is open. I feel an Alvey 455B, 455BXL or 475B is best for the job.

I use a 455B because I can control the drift and this reel has a drag system. You can cast it in the same way as a normal Alvey too, so if I’m fishing the headlands I can cast over rocks, and if blackfish are way out in deep water I can reach them more easily than peeling out line as you have to do with some centre-pin reels.

Mind you, I own a couple of older Alvey reels that require line to be peeled out to cast and I love them as well. Line choice is important. I don’t like floating line because the wind can bugger it up on the drift. I’m not a fan of braid either. Other anglers use braid and have success, but I like 12-14lb mono main line.

You can easily fit 300m of line on Alvey reels. If I’m fishing the river I’ll run a 4-6lb leader and if I’m on the headlands I’ll go up to 12lb because the fish are much bigger here and fight dirty. Floats are equally important, and if fishing the headlands I use a bigger float because I have to contend with wave surge and different sweeps.

In the river I use two types of float: a very light one for back waters with minimal flow and a slightly bigger one for running water. If you go too small a float in running water you will receive a lot of water bites, meaning the stronger current pulls the float under the water, not a fish.


Some fishers still strike thinking they’ve had a bite but they’re sorely mistaken. I most often use a medium float and I like to weight it so I can see just 20mm of the float sticking out of the water. I do this because if blackfish feel resistance from a float that is sitting right up on top they will usually let go of the bait or just mouth it. Usually, but not always.

While recently fishing with my mate Loddo we went to his special spot where the float had to be sitting proud out of the water. We were fishing in very fast-moving current with a lot of sweep and if I’d fished my float in my normal way I would have been striking all day and catching nothing.

With a proud float you have to strike at even a quiver or small down. This was a whole new learning process for me because I’d never fished this way before. I only used one hook and also had a weight on my leader, which is something I never do, but we certainly caught plenty of blackfish.

If I’m fishing in rivers I like to use a shotgun rig, which consists of two hooks and leaders, one 30cm long and the other 20cm.
I prefer mono to fluorocarbon for leader material because I find fluoro too stiff, which impedes the ability of the bait to waft around in the current.

The leaders are attached to a three-way swivel, which is connected to 100mm of 12lb line with my sinkers on it. I generally run a 2 barrel and a split shot sinker for weighing the float down. This line is tied to another swivel that is connected to the main line. To my main line I attach a stopper and then my float. A stopper determines the depth you fish at.

So if I’m fishing in 3m of water I set my float at about 2.8m deep, just off the bottom, but if my bait is snagging I simply adjust the float. Stoppers can be bought at tackle shops or you can tie your own with wool. When using a shotgun rig I never attach lead to my leaders because I like the hooks and baits to float around just like weed on rocks.

I also use two different baits to see what the fish are taking. My rod of choice is a newly bought 10’6” Wilson Live Fibre Blackfish. I own some bigger 12’ Wilson rods too, which I use on headlands and breakwalls. Alvey Blackfish rods are also worth a look. My new Wilson Live Fibre rod is great for fishing from a boat.

The best way to learn how to blackfish is to sit next to a blackfisher and just watch them. Say hi and slowly bring up questions.
Do not overload the fisher, mostly watch and check out the positioning of the float and what bait, rod and reel are being used. Also watch the float and see when the fisher strikes.

These things are very important to success but the most important element is patience.
Sometimes you will really need it.

Squidgie thinks he was born with a fishing line in hand. His father and uncles were mad-keen fishers and spearfishers, he learnt his trade in the Wollongong area as a kid and is still learning to this day in his current area of the far north coast of NSW. Bream and flathead are the main species Squidgie targets on soft plastics or hard-body lures. He hasn’t used bait in about 15 years. Any queries, just email squidgie@bigpond.net.au or phone 0402 415 487.
Previous Murray Cod in Northern NSW
Next Catching Flathead in the Great Sandy Strait