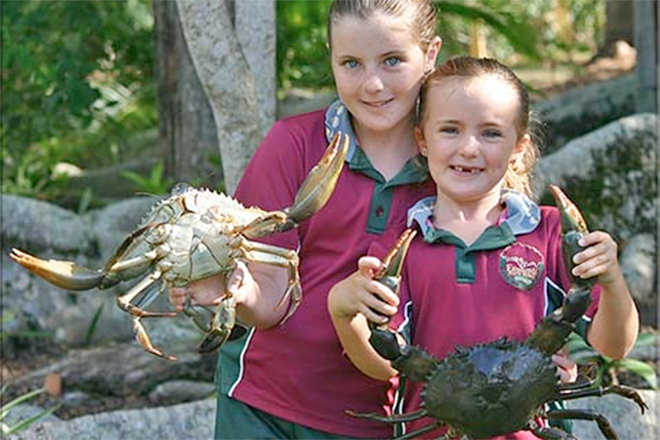 Bring on the Noosa River crabs

With a bit of weather headed our way and some significant falls in the Noosa River catchment areas we will see a real change in the river, Noosa River crabs are the first thing that springs to mind with good numbers of legal bucks taken, the deeper more saline area will be where most of the big bucks will be holding, fresh mullet is still the prime bait, soaking it in tuna oil will also bring them running.

Don’t forget to leave those pots in for at least one tide cycle. Weyba Creek and the Frying Pan have been fishing well with some great whiting taken, worms and yabbies are the baits of choice but if you are looking for better fish, give surface lures a go, the River2sea Skinny dogs are perfect for the job, one quick tip is to use a long leader and also use mono leader as fluorocarbon sinks and can upset the balance of the lure.

The tailor are also in the river with good fish coming from the mouth and in Woods Bays, Lures like the  Bassday Sugapen 70F’s, are great for the surface bite while 10-15g Halco twisty work well on the fast retrieve. For the bait anglers; whole small pillies and garfish on gangs free floating in the current has worked well.

Free floating baits have also worked well on the mangrove jack at night, these fish tend to come out of the snags and feed on the flats under the cover of darkness. Large flathead are still on the chew in the river with plenty of fish over the 75cm mark being returned to the water, large brightly coloured paddle tail soft plastic have worked well but the prawn profile is by far the best on the flatties.

On the offshore seen, Spanish mackerel are in good numbers, they are being caught around areas such as North Reef, Laguna Bay, Sunshine Reef, Chardon’s Reef and Double Island Reefs. Lures like the Halco 190DD hard body lures have worked well on the faster troll while the famous and Spanish Specials loaded with a big pilchard or slimy trolled very slowly has also claimed some great fish.

On the beaches; Whiting numbers along Sunshine beach have been really improving over the last week, with some 30cm+ fishing being caught on baits fished in the deeper gutters. A few schooled jewfish have been caught off the rocks in deep water using whole pilchards, squid and slabs of fresh mullet fillet. Noosa North Shore has also fished well for whiting and dart with the bigger morning tide fishing well, a couple of large tailor have also been taken in the past couple of week.

In the fresh water, Saratoga have been caught in both Lake McDonald and Borumba in the timber areas using ¾ once Bassman spinnerbaits, working the lures along the bottom and in the thicker timber lines fist thing in the morning has been a proven tactic, bass are still on the bite, some of the schools of fish have been suspended at different depths, so try trolling both deep and shallow diving hard bodied lures, as well as spinnerbaits and tail spinners. By working the water columns it will increase your chances of catching more fish and give you an idea of what depths the fish are actively biting.