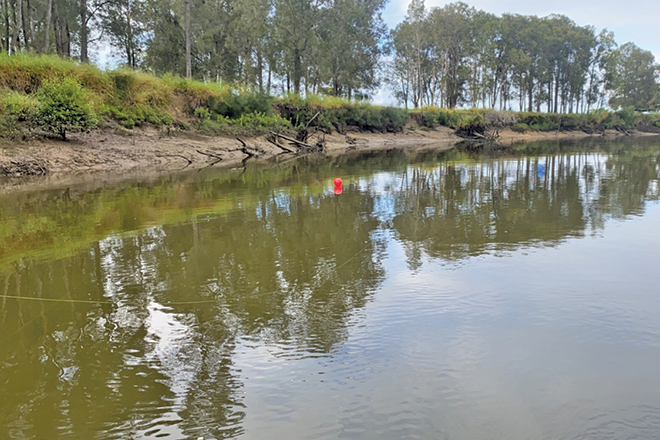 Live bait drifted out under balloons will get the attention of any sharks in the area.

April is generally an excellent month for a wide variety of fish species and crustaceans. Brisbane River Bonanza

At the time of writing, the rivers and creeks were still very dirty and mostly fresh around Brisbane. Brisbane River Bonanza

As long as we don’t receive more rain, the fishing during April should be really good. Brisbane River Bonanza

The bait will start to move back upstream and the fish will follow.

Mud crabs will also be in good numbers this month.

The flush out from the rain will see plenty of big bucks moving around looking for food.

Prawns will be a target of choice this month too.

Areas such as the front of Nudgee and Clontarf will be popular.

It’s not hard to find out when prawns are around.

Keep an eye out for full car parks at boat ramps and check out the local fishing pages on social media.

Plenty of people like to brag about their catches there, which sees every fisho and their dog in that area the next morning.

The Brisbane River was fishing well before the flooding.

It’s been years since I’ve seen so many smaller fish in the river, which is a good sign for future fishing.

Some nice snapper were also feeding around the same areas as jewies.

Threadfin salmon numbers were also excellent, with fish spread out between the mouth and the Sir Leo Hielscher Bridges (formerly known as the Gateway Bridge).

A lot of these fish would have been washed out of the river into the bay.

These fish can end up anywhere after a flood.

The Pine and Caboolture rivers are both worth a look for big threadfin during April.

Follow the bait schools up the river and pay close attention to any bends and deep holes.

The fish use the deeper water as cover when they aren’t feeding.

If you annoy them for long enough with a variety of lures, one of them will usually have a bite and then the fun begins.

They are a lot more fun to catch in the shallower water of the Brisbane River than from the deeper water – the fish run sideways instead of down and can tear lots of line off in a real hurry.

They also release a lot better than from deep water.

They suffer from barotrauma when caught in the deep and can be very difficult to release.

Sharks are also a big problem in the Brisbane River and will wait patiently under boats, eating hooked and released fish.

Mud crabs are going to be very active as the water quality starts to improve.

Expect to get large numbers of crabs in each pot because many crabs would have been washed out of their favourite spots and will be wandering around eating whatever they can get.

Mullet and chicken frames always work well and are typically the bait I use, but any frames will get the job done.