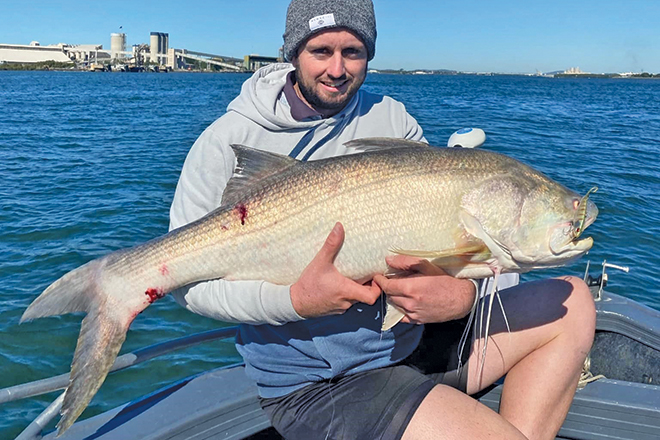 Jarryd Parkinson and a big threadfin salmon from the river.

I hope everyone got through the floods okay. There’s still some debris coming down the river, so it pays to keep an eye out for it, particularly at night. Moreton Bay threadies

Fishing has slowed due to the colour of the water, making it a little harder to find fish. Threadfin salmon have occupied the river for quite a while. Moreton Bay threadies

About eight years ago, a population explosion started the phenomenon that attracted fishers to start targeting these species – they are found in no other place in the bay except for the river and can be found all the way up passed the city reaches. Moreton Bay threadies

Threadies do not hunt by sight alone but mainly use their sensory whiskers to locate bait in the murky waters of the river. The best places to target them are along the edges of the river drop-offs and other structures that line the river shorelines.

Up until a couple of years ago, I rarely targeted them because I was more intent on targeting reef species. But with the number of photos posted on fishing sites, I decided to give it a try a few years ago. I am no expert on threadfin, but this how I go about targeting them.

In my opinion, November to May are the best times to target them and the number one bait is live bait – which is readily available in the river – with herring, poddy mullet and live prawns my preference.

I have used some 11.5cm split-tail vibes, Berkley Shimma Shrimp and Shimma Shad, but I find snapper prefer these more than threadies, so I stick with livies as the number one bait.

And the best time for threadfin have been on a run-out tide, when bait is on the move, especially at night.

Areas such as the drop-offs in front of the container terminals, the rock wall at the mouth of the river, Clara Rocks, the mouth of Boggy Creek and the sunken wall near here, and the mouths of Bulimba and Breakfast creeks.

At night, you also have the many lit areas that dot the river where baitfish accumulate, and where there are baitfish you will often find threadies and jewfish.

The gear I use for threadies is a Shimano Symetre 4000 spooled with 30lb braid and 20lb leader.

Heavy braid is used for protection against oyster-encrusted pylons and the heavy leader is to stop their surprisingly sandpaper-like teeth chewing through the leader.

I prefer spin gear when targeting threadies because it provides more feel and helps with the erratic fight of a thready.

Usually, once hooked, these fish will swim towards you very quickly, catching you off guard and often throwing the hook.

As a beginner to threadfin fishing, it is common to think you’ve lost the fish because all the weight is gone.

This is not the case and can be alleviated by winding as quickly as possible to get the weight back on the line and to help the circle do its job.

A good sounder comes in handy, especially a side view for finding bait and secondly finding fish.

The turn of the tide is one of the better times to sound along the side of the river.

To say the bite of a thready can be frustrating is an understatement.

Some days they will engulf the bait, which is easy to detect with a large thump felt through the braid.

However, most of the time, bites will feel almost like a bream bite as they peck and play with your bait.

This is extremely challenging since they can be very hard to hook when they’re in such a mood.

By far one of the best times is the last half of a run-out tide at night.

Lower tides tend to push the baitfish out into deeper waters along the drop-offs.

I’ve found that different locations tend to fish better on different stages of the tide, so keep a note on the various areas you fish.

As a side note, snapper stock in the river have increased in good numbers, so if the threadies aren’t biting you can always try for snapper, with the majority coming from the container terminals.

Good quality prawns are also available in the river from the small bay near Luggage Point (also called the poop chute) up to Colmslie ramp.

Jewies are another option when fishing the river, but they don’t seem to travel past the city reaches.

When fishing these areas, I look for structure that the tide passes because jew tend to hang around structure as the tide flushes baitfish past, and the best time is a run-out when bait is flushed from its hiding places.

There are probably many places jew hang out, but the above areas are where I have the most success, and while some use lures, I always use live bait.

I usually shoot out to the Coffee Pot beacons in Brisbane Rd and jig up some yakka, which I find jew prefer because of their bigger size.

When I’ve been asked where I’ve caught these fish, my only answer is the fish are where you find them.

There is no secret place or location and potential is at every piece of structure, especially in the river and areas where there is light shining on the water.

The light attracts bait and so predators such as threadfin and jewfish show up.

Baitfish are the key to finding both of these species, and doing the leg work.

The only difference is that threadies may play around with your bait, whereas jew take your live bait and head to the bottom or any structure close by.

I use the same tackle for jew as I do for threadfin.

The reel is usually a Shimano Symetre 4000 size threadline with 30lb braid and a 20lb leader.

Both reels are on 7’ Shimano Impact XT 4-8kg rods with a nice flexible tip.

By using circle hooks, I find I have a better hook-up rate because you just let the fish run with your bait then apply pressure to your line and the circle hooks do the rest.

I usually fish with two rods – one with a yakka attached and one with a live herring or prawn.

This covers the options of having a small and a big bait when hoping to attract jew or threadfin.

I also find jew swallow the bait headfirst, so it pays to place the hook through the mouth, and by keeping tension on the line you let the circle hooks do what they were made to do – hook the fish without striking.

By striking once you feel the bite, you will on most occasions pull the bait out of the fish’s mouth.

At times you can hear bait and prawns busting the surface at night as a predator is feeding below, so it indicates you’re in the right area, and the electric comes in handy – letting you sneak up to where they’re feeding.

A good side cast sounder is paramount, it helps locate the bait coming off the flats so you can concentrate on finding the fish patrolling the drop-offs, then it’s a matter of coaching them to bite.

Chasing jew in the river and the bay has been a challenge and being able to catch them has been hard work, this is also where an electric motor helps you hold your position once you’ve found them.

Jew fishing in the river is a lot easier than targeting them in the bay because bay jew seem to school up more compared to the river variety.

I have found my best sessions to be on or around a new moon with a run-out tide – if you get these conditions with an early morning start it’s even better as jewfish seem to bite more frequently then.

As I stated above, I’m no expert on either species – this is the way I go about it and I’ve had many a trip with no success.

You also don’t have to travel too far if you launch from the Whyte Island boat ramp.

It’s only a short trip out of the boat passage and you’re in their territory.

For northside fishos, the Pinkenba Boat Ramp also gets you into their territory with a short trip east or west from the ramp.

I won’t be reporting for a few months because we’re hooking up the caravan and heading north and out west – enjoy!