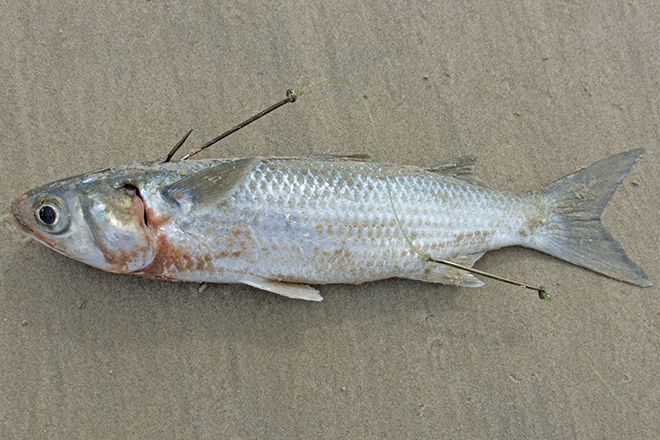 While many thousands of articles have been written on how to catch large jewfish using almost every technique and bait or lure imaginable, the old saying ‘big bait equals big fish’ still holds true, especially when fishing off the beach.

Yes, I’ve seen large jew caught on king prawns, small strips of mullet, bonito and the humble beachworm, however I have not on the other hand seen too many small jew of about 10-12kg caught using a 1kg sea mullet as bait.

During normal weather conditions – without a flood event – catching mullet of about 500g is quite doable using dough as bait around sand flats or better still during the annual mullet run.

Most commercial fishos are more than happy to sell you a few smaller male fish, however you have to be with them when they haul a patch.

Getting live mullet during a flood becomes quite difficult, so I’ve found the next best thing – a whole dead mullet.

In all cases, I use a two-hook rig consisting of two 10/0 Eagle Claw hooks spaced 15cm apart on a 70lb Platypus leader and 30lb Platypus Lo-Stretch main line.

This is so that when the bait – dead or alive – is in the water, it will tend to face away from me with the slightest tension on the line.

I always fish a rip on the beach, which makes it so much easier to get a bait to go out.

In the case of a dead bait, I cut one fillet from the tail back to the head so that when it’s cast into a rip, the fillet will spread open against the current and drag the dead bait out to the strike zone.

Even using a 1kg mullet off the beach, when I get a bite, I do not feed any line off my spool before striking – I simply give it the down of my rod then strike hard.

And no, I do not strike more than once because if I haven’t hooked it properly the first time, I certainly won’t on the second or third strike.

By doing this, more often than not, you run the chance of pulling the hook out of the fish.

Most times, you will land a jew that is hooked only by the skin of its lip or foul-hooked in other ways.

The entire east coast of Australia including the Clarence River has recently had major flooding, which has massively affected fishing along the coast.

As with other communities, Iluka was isolated for a week and – to make it even worse – access to the breakwall, Coast Guard tower, Main Beach and the Iluka bluff was not possible due to standing water.

Desperate for a fish, my son Mischa and his girlfriend Rebekah spent a few nights catching bream and catfish in the floodwater at our local boat ramp to keep their eye in, so to speak.