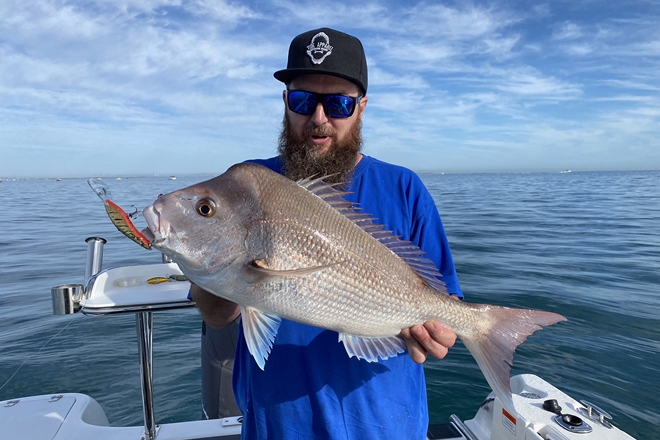 Deep diving lures and light line can make the difference.

THERE are lots of places to troll for snapper and your best bet is to start looking at maps with contours lines, Beacon to Beacon charts and even your sounder if it has a detailed Navionics card. To give you a few ideas of good places to start trolling for snapper, I would look at Peel Island, Mud Island, Green Island and the reefs off Ormiston and Wellington Point. Try to find structure on the sounder holding bait.

On this occasion, we stuck to our plan of trying to troll up snapper and then go looking for a tuna or two. While the technique of trolling for snapper has been around for years, it is a little new for me and a skill I am keen to further develop. Thankfully, I have had plenty of in-depth chats with Sean Colon, BNB’s resident snapper trolling king (he will love that), so felt I was equipped with enough ammo to give it a shot. Brisbane snapper trolling and tuna

George has already had good success using this technique over the past couple of years, so hopes were high despite several boats coming within casting distances at times. Like most forms of fishing, you either need to find structure or bait, or even better structure holding bait, which will almost always include predatory fish such as snapper.

Thankfully, there is plenty of structure around Harry’s, so it is easy to find, especially with today’s modern electrics (the setup in the Cruise Craft is a Furuno 295, which may be overkill for the bay but it certainly does the job). Once you have found the structure, is it simply a matter of driving back and forth over and around it until you get a strike – easy, hey? Well, it can be, but one of the key points you need to address is making sure you get your lure into the strike zone. This is where the northern bay differs to the southern bay.

I am not totally sure why, but I think it might have something to do with the bottom structure and food sources. The southern bay seems to have more cockle and mussel beds, which are obviously on the sea floor, so your lure needs to be down there. At Harry’s, a lot of the food source is baitfish, which hold above the bottom over structure, so they are higher in the water column. In this instance, rather than getting your lure to the bottom, you can fish it mid-water. Brisbane snapper trolling and tuna

Not having to plough the bottom is definitely an advantage because some of the depths we trolled were over 12m, where you simply can’t get one of these small lures without the aid of a downrigger. The take-home message is you need a lure that will dive relatively deep to get into the strike zone where the bait is, but it does not need to be bashing the bottom. Snapper will rise to take a bait or lure, so if you can get their attention, you are in with a chance.

A massive selection of deep-diving lures are on the market and many will state they dive to 4-5m. Do not dismiss these, as they are the ones you want, even if you are fishing 10-12m. Some of the lures used or in the tackle box included Atomic Shiners (80mm), Zerek Ripper Divers (90mm), Killalure River Rats (125mm), Classic Lures Dr Evils (90mm) and Halco RMG Scorpions (90mm).

By running light braid and leader you will be able to get these lures diving way deeper than quoted on the packet, especially when trolling with the tide or current. So, what do I mean by light? Well, George had 10lb braid and 12lb leader on his baitcaster rig (for some reason he likes chasing them on that setup, but it works). Brisbane snapper trolling and tuna

One of the reasons I think this setup works is because of the fine line and leader and the fact George can easily adjust how much line he has out. This is where having a good sounder and being able to read it is important, as you can pick out baitfish and single bigger fish and get your lure in the right spot or to the right depth. Now, I did say you simply drive back and forth and that is true, but making sure you understand the key points related to lures, line and using your sounder will improve your chances.

Thankfully, on this occasion everything went to plan and as the sun was just poking its head over North Stradbroke Island, George’s rod buckled over, with line peeling off the spool at a rate of knots. The key here is not to panic and instead let the fish run as you take the boat out of gear. This first big run is exhilarating and gets your blood pumping, but it also tires out the fish, so don’t try to fight it at this stage, just make sure you keep pressure on. Brisbane snapper trolling and tuna

Depending on the size of the fish and the direction of the tide, you may need to manoeuvre the boat to aid with the capture, especially if using lighter line. Before too long, we had 70cm-plus of snapper laying on the SeaDek and destined for the Esky. Thankfully, our plan came to fruition, which was extremely rewarding.

Just to make sure it was not a fluke, we continued trolling, which resulted in one more snapper. It is important to remember when trolling that you mark any good-looking ground or structure you go over. Some of the by-catch we got while trolling included school mackerel and grinners, but I guess if you are getting these, you are in the right area. With the sun climbing a bit higher and an increase in boat traffic, we moved on to chase longtail tuna. A couple of birds were in the sky and we saw a very small bust-up in the distance, so that was the direction we went in. Brisbane snapper trolling and tuna

Once again, the key was to find the bait. We came across small patches here and there, but we were looking for the mother lode. If bait is schooled up in big tight balls, predators are nearby. By spending five or 10 minutes searching, you will improve your chances of catching fish. Once a large school of bait was found, we simply cast our plastics and let them sit in the rod holders as we had some morning tea. This is a technique George has used for years and one Joseph Cormack showed me a year or two ago.

And while it seems too simple to be true, it works. Within moments, George was on, with his 10lb outfit loaded up again, however this time we needed to chase it down. After a relatively short battle, given the arsenal of choice, the longtail was in the boat. This process was repeated, and after finding the large school of bait again I hooked up to a better fish, but my time with Joseph meant I had 50lb gear on and it was brough to the boat in a flash. Brisbane snapper trolling and tuna

The lures that did the damage were the Zerek Flat Shad in white rigged on a TT HeadlockZ in 3/0, 3/8oz and a Bubble Gum Z-Man 5” StreakZ rigged on a Barambah Flatty jig head in 3/0, 1/2oz. Key take home message: find the bait and you find the fish. It is also important to watch your sounder and let line out to make sure you are in the strike zone and adjust the weight of your jig head as needed.

By using very simple techniques and refining them a little, you should see your catches improve.