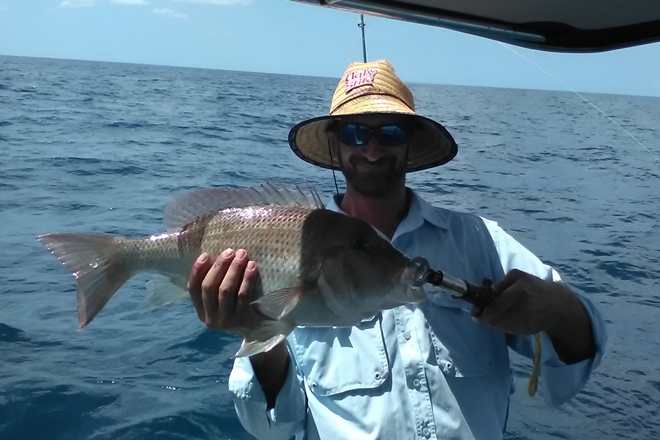 Scott Svensson with a nice sweetlip he caught off Bundaberg recently.

Wasn’t it great to finally see some decent weather earlier this past week?  By all reports quite a few locals made time to wet a line on the Bundaberg inshore reefs and in the rivers last weekend.

The lighter winds allowed anglers to explore the inshore reefs along our coastline which, at the moment seem to be loaded with school, grey and the odd spanish mackerel.  The mackerel are responding well to floated pilchards, and soft vibes, metal spoons, and Flasha lures between 30g and 50g are all working well.

There has also been a few nice snapper showing up on the shallow reefs but the mackerel are making things a little difficult to present lures or baits down on the bottom.

The Burnett River produced some of the best quality whiting I’ve seen for a long time.  Summer whiting up to 40cm were caught around the many sand bars.  Quite a few nice bream are also being caught along the rock walls, with most of the action at the bottom of the tide and the first hour of the run-in.

We’ve heard a few reports that the prawns may have showed up along Woodgate Beach.  Whilst very patchy, this hopefully will improve over the coming weeks.

Lake Gregory’s water is still a little dirty in the main basin.  Most of the action has been up in the timber and up the back of the middle arm where the water colour is much better.

Lake Monduran has also bounced back with a heap of barra caught between 50cm and 70cm on soft plastics and suspending hard body lures.  Because we have had consistent south-easterly winds for the past two or three weeks, locating the barra is much easier.

Any shallow, sloping bank with wind and current flow pushing onto it has had good numbers of barramundi.  May is a fantastic month to fish the dam as the barra are active and feeding up before winter.