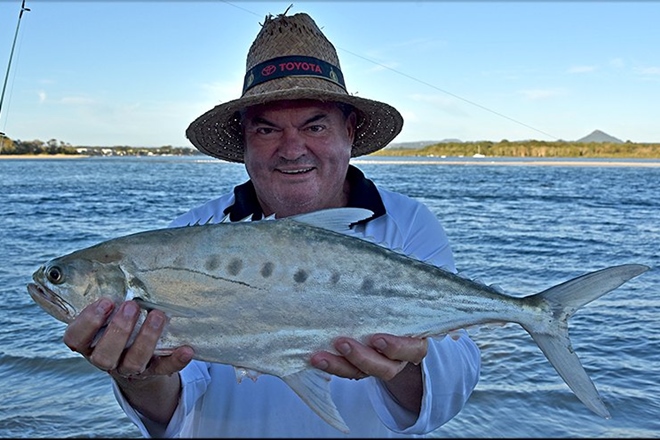 THE Noosa River is performing exceptionally when it comes to large flathead captures. We seem to be having one of the best flathead seasons in memory. The run out tide has been fantastic with good catches being recorded throughout the system. Yet another meter plus fish was recorded last week with plenty more into the high 80s and early 90cm range. Fishing live bait close to the bottom on the drift seems to be the way to tangle with these monster flatties. For those who can’t get live bait, fish baits like whitebait and small pilchards fished on gang hooks and very lightly weighted just enough to get them to the bottom. Soft plastics have also been claiming their fair share of flatties, Zman Minnowz in 3in, Chase baits in 2.5 and 3 inch and gladiator prawns have all recorded good catches. The use of scent will enhance the productivity of your plastic fishing and is essential if you want consistent results.

Whiting have slowed a little this week with the change of the tide cycle, anglers are still catching them with live yabbies and live worms and have seeing reasonable catches around the top and start of the run out tide. The river has seen an increase in catches of bream with a few older breeding fish around the 40cm mark. The run out tide seems to be working the best if you can tie in a night fish with a run out tide you should come up with the goods. Baits for bream are foul gut, mullet gut, white bait and mullet strips. Kale Kale trevally have shown up this week some really god size fish have been caught in the river. Fish up to 60cm have been landed with some bigger models escaping the net.

Diamond trevallies are still in good numbers with a few good size Golden’s thrown into the mix. Big eyes are being caught in the low light hours of the day. Plastics like the Zman streaks 3.75, gladiator prawns and chase bait in 3in have been working really well. A combination of slow retrieves and fast erratic retrieves will see these fish strike hard. A few good size queen fish have been caught on the current lines. Fishing on the darker side of the line and casting into the clearer water bringing your lure back through the change of colour has been very successful.

On the offshore seen, there has been a few nice weather windows last week the offshore with angler getting out amongst the fish. Coral trout are still in great numbers with Venus tusk fish grass sweetlip, and the odd pearl perch starting to show up on Sunshine reef. North reef has produced scarlet sea perch, Spanish mackeral, good size tusk fish, snapper and squire. As the water cools the snapper will start to show up in good numbers. A great way to target these fish is with slow jigs like the river 2 sea Octo sniper. These jigs are dropped to the bottom and pitched very gently and slowly snapper find them very hard to resist.

Tuna have been in great numbers over the last week with plenty of fish just outside the breakers, they mainly consist of Mack tuna but there were quite a few a few long tails amongst them. One long tail was boated down toward Old Woman Island at 23kg.

The beaches; the Noosa Northshore has really been firing with bream, whiting and flathead all coming from the gutters. Double Island point has fished well with some good gutters up at the northern end of the beach. Live worms and prawns have been great bait. Some really good size Permit were caught late last week with mullet strips the bait.

Borumba Dam has been fishing well with good numbers of bass being taken down near the boat ramp and up in the timber. A few Saratoga have been caught up in the upper reaches of each arm with surface lures. Red claw are still being caught in great numbers. Get in while the water is still warm, as the water cools they will go off the bite. Lake Macdonald has fished a bit slow but people are still getting good size bass at the bubble line and up around the botanic gardens.