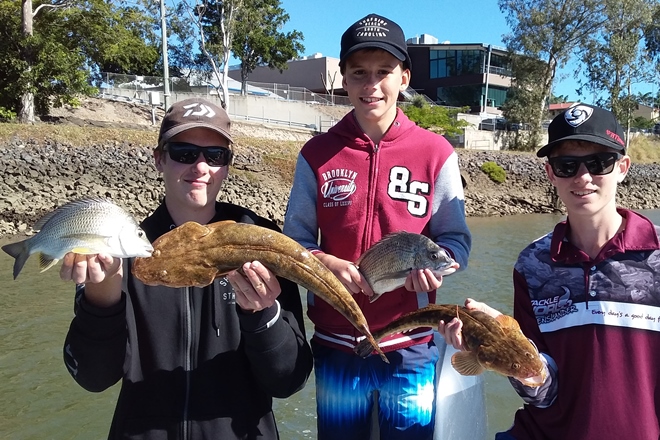 Cameron, Alex and Matthew with some flathead and bream after a successful outing in the Burnett River recently.

Unfortunately we have received limited offshore reports from around the Bundaberg area this week due to the weather, but luckily enough we have had some fantastic reports from our inshore reefs and the local rivers.

At the moment there are millions of mac tuna right along our coastline.  Casting small metal lures into the schools of tuna and then retrieving them back at high speed has provided plenty of action for the local anglers.  Just keep in mind that the bait the tuna are eating on the inshore reefs is only small, so downsizing your lures might be the key to success.  Other areas such as Ryans, the Two Mile and the Cochrane Artificial Reef have also started to produce some quality grunter, big squire, sweetlip and school mackerel.

This is always a magic time of the year to fish the Burnett.  Good numbers of bream are hanging around all of the rock walls and in town around all three bridges.  We’re tipping some big summer whiting should fire up this weekend with the full moon in the middle of next week.

A few blue salmon, tarpon and queenfish have showed up in the Town Reach.  Whilst it is early in the season, it’s great fun to target these hard-fighting sports fish.  Once again, there’s been some good mud crabs and prawns in the deeper holes in the Burnett.

Both of these systems are fishing extremely well.  The word is that there’s been some really nice grunter and flathead caught in the Baffle around the mouth this past week.  Now it’s starting to get cooler, species such as tailor, queenfish, flathead, winter whiting and grunter will dominate catches over the next few months in both these locations.  A few nice muddies were also caught this week, so putting a few pots out this weekend will be worth a go.

With the full moon next week, the Elliott will be the place to be to chase big summer whiting and flathead around the sand bars.  The first few hours of the run-in tide will be the time to target these species.  The good news in that good numbers of winter whiting have showed up off the coastline from Hervey Bay to Bundaberg, so Woodgate will be a great spot to try for these fish.  Strips of squid, beach worms or the good old Berkley Gulp in Sandworm are all working a treat.

If you’re keen to hook a barra this weekend, Lake Monduran is the destination of choice.  With a stable weather pattern the past few days and the full moon mid next week, the barra should fire up before it gets too cool.  Jigging soft vibes in two to three metres of water or casting suspending hard body lures through spindly tree tops has been working well for the anglers at the Lake Monduran Holiday Park.