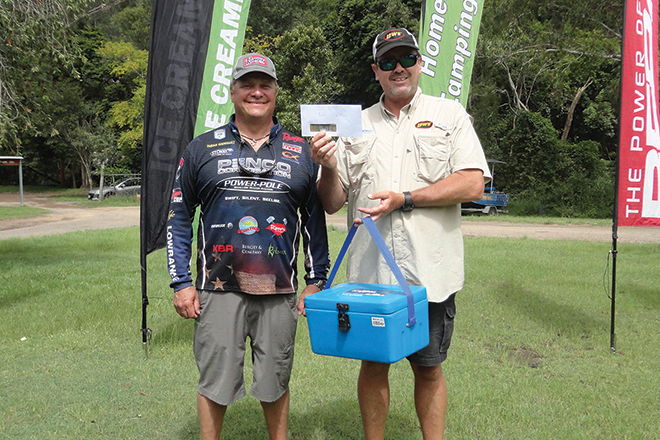 Fabian Rodriguez and Steve Kanowski made up the winning Team Tennessee.

IF you put a plan together, sometimes things just work.

Steve Kanowski invited US angler Fabian Rodriguez to join him as partner in round two of the Basstasstic X-Factor teams series. Fabian is an elite bass angler in the US and he was coming down under to visit family.

But he also wanted to try his hand at targeting Aussie bass. This event gave him that opportunity and when paired with Steve, they were a force to be reckoned with. Steve told Fabian he would be taking him to a very picturesque dam in the form of Borumba Dam near Imbil.

There was also talk of vampire drop bears and plenty of other ‘real’ Aussie stuff to make him feel just a little terrified. A barbecue was held for anglers to meet Fabian and talk fish.
He told anglers about what happens in the US and plenty about how tournaments are run over there.

He was also given plenty to think about regarding good-old Australia. It was a great night and Fabian felt very welcome as well as keen to go fishing on Saturday for the first of the day’s sessions.

With a change in how the teams tournament is run, all anglers had the first day to find their best two bass out of two sessions, with only two fish recorded per session. The new change carries the two best bass from day one over to day two, so all teams now have a base score to add to on day two.

On day two, your team’s two best bass for the day are added to your day one tally, so it’s your four best fish that count towards your final score. Borumba was fishing a bit tough as the water was a little dirty and the bass were still feeling the effects of the inflows.

Day one saw Team Tennessee comprising Fabian and Steve take the lead, with two good fish giving an overall score of 913 points. Coming in second for Saturday was team Country to Coast made up of Laurie Crumblin of Mundubbera and Peter Batey of Gympie, with a solid score of 884 points.

Day two was a little different, with some fish caught in the main basin, while others went for the two creeks, but in general it was tougher than day one. In the end, the winner was Team Tennessee, with an overall score of 1785 points.

Fabian and Steve won the Big Bass prize too, with a quality 458mm to the fork bass.
The next round will be held at Bjelke-Petersen Dam in June.