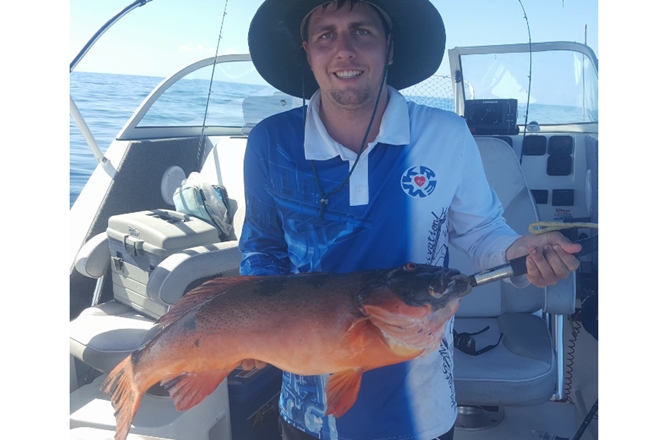 Hayden Gooden with a nice coral trout he caught off Bundaberg recently.

Earlier in the week was the chance to head out reef fishing on the Bundaberg offshore grounds as that south-east blow has come through and it looks like things will be a bit rough for at least the next week.  Anyone who was lucky enough to have made it out scored really well with some big coral trout, red throat sweetlip, parrot and a few red jew.  There has also been a few cobia and Spanish mackerel around most of the reef areas.

If you managed to beat the winds earlier this week, the inshore reefs such as the Two-Mile, Four-Mile and the Cochrane Artificial all produced some reasonable fish with some grunter, grass sweetlip and school mackerel all being caught.  The earlier morning high tides have been the better times.  There is also plenty of tuna and queenfish about for any of the sport fishers.

Both of these systems have had a fair fresh flow down them, so most of the fishing has been done around the mouths.  A few grunter and bream have made up most of the catches with a few jacks being caught on live baits.  Crabs have been flushed out of their hidey-holes and have been a problem for the live-baiters by snatching the baits, so it will be worth taking the pots.

The Burnett has had a flush too, and most of the action has come from further down river.  Grunter, bream and cod have made up most catches, with a few large flathead and the odd jack coming off the Northern Rock Wall.  There are a few small GTs and queenfish about the mouth also with a lot being caught on surface poppers or white soft plastics.  The mouth will be worth a look for a mud crab also.

This is our cleanest system along the coast and well worth a fish. There has been plenty of bream, whiting and flathead on the flats and plenty of mangrove jacks up the river.  Most of the jacks have been caught on prawn imitation lures as there is heaps of small prawns about, so it pays to match the hatch.  There has been an odd barra mixed in with the jacks, so this is definitely the river to fish at the moment.

Both of these dams have fished really well this week for bass with most of the bass holding on drop-offs.  Targeting them with small Vibes or small natural-looking soft plastics has been the go.  Most of the bass have been in the 35cm to 48cm range, and at these sizes they are a great fighting fish.

The dam has been a bit tough this week, but some persistence has paid off with a few small barra to 80cm being caught.  The key to catching the barra is bite times such as sun-up or sun-down, and tide-time bites.  It’s funny how tide changes in the salt can affect the dams and the barra.  Using small lures is also a key as most of the bait in the dams is small at the moment.  So again, match the hatch.

So, even with a dodgy forecast, there are still plenty of fishing options for the weekend around the Bundaberg area.