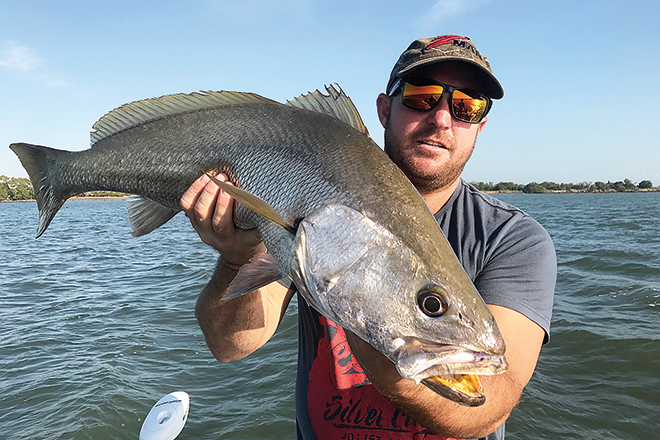 Plenty of jewies have been extracted from the Brisbane River recently.

Mixed bags in estuaries around Brisbane

MARCH is an excellent month to be fishing the estuaries in southeast Queensland.

It’s a great time to secure a mixed bag, with a variety of fish species and crustaceans on offer. The prawning season has been very productive so far. All the rivers and creeks around Brisbane have produced good numbers of these tasty treats.

Most of the prawns have been a bit smaller than usual, but they’ve been big enough to provide a decent feed.  They haven’t been hard to find due to the number of boats out there chasing them. I use my sounder to find the better schools that the other boats are missing.

The larger rivers including the Caboolture, Kedron Brook and Pine tend to be a lot easier to cast net than the smaller creeks running off Pumicestone Passage. Creeks such as Glass Mountain, Hussey, Coochin, Bullock and Ningi are quite muddy, which can leave your boat in a terrible mess after a couple of hours of cast netting.

Many small unwanted critters also live in these creeks and they often get caught up in cast nets. Bullrouts are one of the more common, along with happy moments, leatherjacket and even the occasional stonefish. These nasty little things can ruin your day very quickly, so keep an eye out for anything out of the ordinary when prawning places like this.

Bream are in full swing in the rivers and creeks around Brisbane. They can be found hanging around a variety of structure and also around the prawn schools. Bream love eating prawns, so it’s a good idea to match your bait or lures to what they are feeding on. A huge range of prawn-imitation soft plastics are on the market and having a good range of sizes and colours can come in handy when the fish are a bit fussy.

Jig head selection is very important and it also pays to have a good line-up of sizes and weights to choose from. I like to cast soft plastics around structure for bream, but vertically jigging deep holes can also work really well. Bream love hard structure such as bridge pylons and rock walls.

Both these areas can vary greatly in depth, which is where a wide variety of jig heads is handy. Using a jig head that is too heavy will make the lure look unnatural and you will get fewer bites. Trialling different weights in a variety of depths to find what works will see more fish sliding into your net.

The Brisbane River has been on fire this year, with large numbers of threadfin salmon and jewies caught regularly. Threadfin have been schooling at the mouth of the river at different times. Being on the water regularly will help you work out a pattern, but it has been pretty hit and miss at times.

It can get boring driving up and down the wharves watching your sounder, but it’s worth it when you find the fish. Jewies have also been hanging around the same area and plenty of solid fish have been mixed in. Many have been in the 90-100cm range, which are good-quality fish for the river.

Soft vibes have been doing the damage, mainly because that is what a lot of anglers primarily use for this type of fishing. Soft plastics also work well, but the hook-up rate in deep water isn’t as good as a soft vibe with two sets of trebles. March can be a real lottery because you never know what will turn up next.

Get out there and enjoy what’s on offer around Brisbane  for yourself.