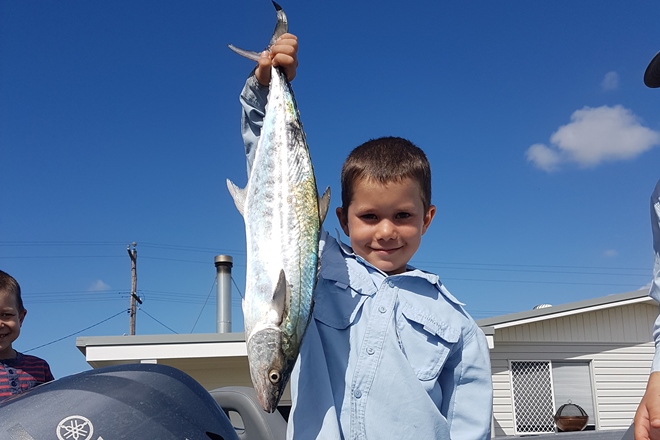 The fishing around the Bundaberg area these past few weeks has been good with plenty of awesome fish being caught.  If you were lucky enough to have gotten out last weekend, you would have seen Bundaberg produces awesome fishing when we get great weather.

Although the tides were a bit on the large side, there were still plenty of reefies caught. If you fished the gutters out to the islands you would have caught some quality fish with red emperor, coral trout, sweetlip and big parrot all being caught. Some of the wrecks have seen some monster cobia and spanish mackerel being caught.  Using big live baits has been the way to hook one of these monsters. The inshore reefs produced some sweetlip, snapper and some big grunter as well as loads of schoolie mackerel.  Most of the school mackerel have been caught by floating out pilchards or spinning with Flasha lures.

The mouth of the Burnett River has seen good numbers of winter whiting and school mackerel.  A lot of the winter whiting have been caught on artificial baits with the Berkley Gulp Sandworms working best. Back up the river, there are still plenty of bream along the rock walls.  There is also good numbers of sand whiting and flathead along the sand flats, and a few grunter and salmon in the deeper holes. Rumour has it that there are still a few mud crabs about as well as a good number of prawns.

Lake Gregory is producing a few bass with most being caught in the middle of the lake.  Small soft plastics such as the Squidgy Fish have been the downfall for these bass. Lake Monduran produced a few barra this week with most being 70cm to 90cm in length.  These barra have been caught on Jackall Squirrels worked really slowly with plenty of pauses.