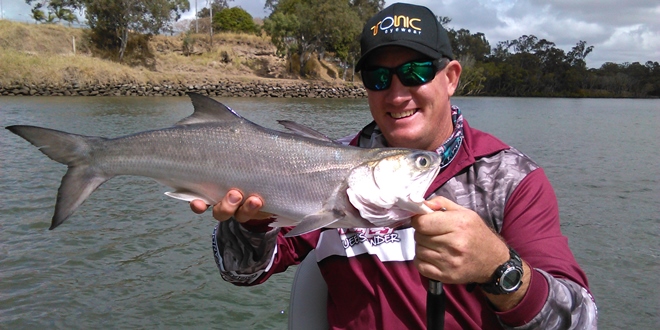 Dale Smith with the salmon he caught on a Samaki Vibe lure in the Burnett River last weekend.

With the first signs of summer starting to show up, the warm northerly breezes are starting to lift the water temperatures around the Bundaberg area. The only downfall with the full moon will be the amount of run in the tide for the offshore anglers as there will be over three metres difference between high and low tides for the Bundy area.

At this stage, the weekend’s weather forecast looks great with light winds and only a slim chance of a possible shower or thunderstorm. The full moon on Sunday night will see species like barramundi and mangrove jack starting to fire up, and over the coming weeks should only improve.

To our local rivers and creeks; I’ve heard good reports during the past week from all three local rivers. The Kolan, whilst still a little weeded up, is fishing well – finally the flathead are in a mood to bite. I know of one angler landing over twenty flatties and a nice barra for a morning session during the week, all on soft plastics and light gear.

The Burnett is also going through a transition phase. After a cracking bream season, they should start to slow down and species like big flathead, barra and jacks should start to be caught more consistently. I had a session on the Burnett last Saturday morning and whilst the fishing was a little slow, we still managed to land quite a few quality fish. We only fished the town reach up towards Splitters Creek and landed a couple of nice flathead, bream, estuary cod and blue salmon.

The Elliott River has also seen its fair share of flathead recently, with the odd barramundi also starting to show up in the upper reaches, providing plenty of excitement for anglers fishing light gear for mangrove jacks and flathead.

I’m planning a trip up to Lake Monduran this weekend, hoping to hook a few barra. A few days leading up to a full moon and a constant wind direction over the past week should make it easier to locate and target these fantastic sport fish.