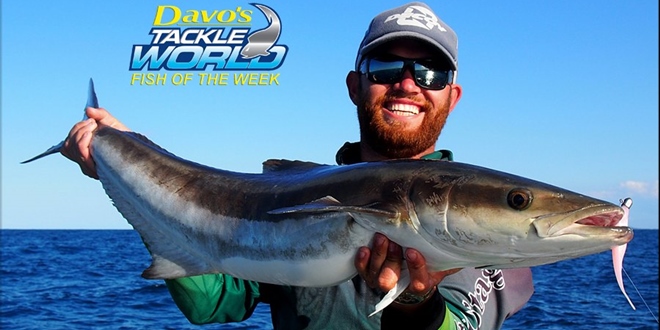 With the offshore scene a little on the rough side, angler tended to opt for the Noosa River with some great results. Starting at the Noosa River mouth and dog beach: there have been plenty of quality bream being landed off the rocks at the river mouth and around at the dog beach. Most anglers using fresh strips of mullet, whole small Hardy Heads and live bloodworms.

There have been a few quality flathead along dog beach, fuze soft plastics have been working a treat on the flatties.

The odd mangrove Jack has been caught on livies, strip baits and soft plastics. Expect to find tailor and trevally around the mouth harassing the bait schools as they move into the river. On the other side of the river the Frying Pan has also seen good bream.

This time of year you’ll often find some good tailor around the frying pan, medium size Strada poppers and walk the dog lures are a good option and provide plenty of entertainment as you see the fish crunch the lure. Some of the favourites are the larger Bassday Sugapen 95F, Live Target Bait Ball popper and Jackall Binksy Popper.

Woods Bays and The Noosa Sound have had mixed schools of trevally including golden, diamond and big giant trevally. Early morning and late afternoon, Jackall Boil Triggers and River 2 Sea Bubble Pops have been producing some nice GT’s, big eyes and big tailor.

Micro jigs continue to be one of the stand out lures for chasing trevally throughout the river and allow you to cover a lot of area and fish the entire water column. Soft plastics are another consistent producer with a good mixture of baitfish and prawn imitations producing the goods.

Take the time to rig your plastics nice and straight for best results!
Up on the Ski Runs, the odd jewfish has been coming from the deeper holes, large flathead up to 80cm have also been reported from the same area with soft plastics and live baits doing the job.

Out on the Reef North reef and the Barwon Banks have seen Snapper showing up in better numbers, cobia, pearlies and amberjack have also been on the menu. Micro jigs and soft plastics have been scoring some nice fish if you want to mix it up from the conventional bait methods.

Sunshine Reef is best at night with good numbers squire and snapper getting caught on well-presented baits.

Now for all the latest information log onto www.fishingnoosa.com.au for up to date bar and fishing reports and don’t forget to drop into Davo’s Tackle World Noosa or Davo’s Bait & Tackle Northshore at Marcoola to find out what’s biting and where, and remember Tight Lines and Bent Spines!