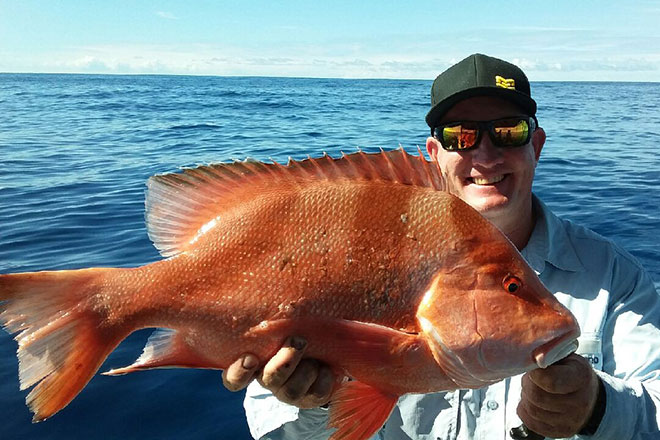 Dale Smith with a 58cm red emperor he caught off Bundaberg.

Now that it’s open season on snapper and pearl perch, all our local reef fisherman can once again get out and chase both species.  Even though the conditions weren’t great, the anglers who were lucky enough to have some time off earlier this week and ventured offshore all reported catching a quality mixed bag of reef fish including coral trout, red emperor, parrot and grass sweetlip.  It was good to see anglers having a crack!

Word is out, that once again in the Burnett River the prawns are in abundance around the port area. Anglers using quality cast nets with plenty of rope have certainly had no problem in securing their bag limit over the past few weeks. Plenty of flathead have been on the chew around the mouth of the Burnett River and over at Skyringville. Good numbers of winter whiting are still being caught off Burnett Heads and are fantastic fun to target with your kids when the weather permits.

Both the Baffle Creek and the Kolan River systems are fishing well. At this time of year, monster queenfish and trevally school up around the mouth and can be fantastic fun to target on light gear. Further upstream flathead and grunter have been responding well to both soft plastic lures and fresh baits. Summer whiting should also fire up this weekend with the bigger tidal movement.

At this time of year, a lot can change in a matter of weeks. The water temperature has risen from 17 degrees to around 23 degrees in the late afternoon and the number of barra being hooked is also increasing. I am predicting with the full moon Sunday night, plenty of local anglers will get stuck into some fantastic barra up to and over the magic meter. Lures such as 140 Molix Shads, Samaki Redic suspending hard body lures and Lucky Craft Pointers are all performing well. I can remember fishing Lake Monduran at this water level and this summer should see plenty of meteries being caught at this awesome impoundment.