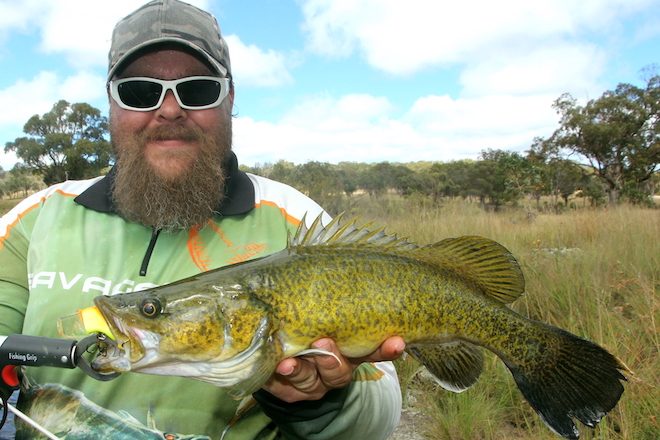 Graham field testing one of the new Predatek surface paddlers while on a father/son weekend away.

AROUND this time of year a few of my regular fishing and hunting companions have their birthdays, which always calls for a day in the pursuit of our regular outdoor activities. First on the calendar is Kevin Clark, with whom I’ve shared many of my most memorable moments on the water over the past thirty or so years. birthday fishing

And at the other end of the spectrum, we’ve been up close to humpback whales. This year our fishing excursion for Kevin’s birthday was by necessity very brief, for only a few hours on one of the local lakes, slotted in between his arrival for an oversight stay on his way north to Ingham and my departure for an afternoon shift at work.

Rather than spend the afternoon chatting at the dining room table, we’d much rather spend the time chatting in the boat, so we ducked over to Lake Wivenhoe for a few hours birdwatching, sipping coffee, reminiscing and oh, maybe wetting a lure or two. As forecast, a bitterly cold front blew through before we launched and though the wind was light, the air temperature and barometric pressure plummeted.birthday fishing

Echoes on the screen of the Garmin showed inactive fish hugging the thermocline down around 12m, however we did manage to pick up a decent fish before a pleasant couple of hours in great company was forced to a halt. Next birthday on the calendar is number one son Graham, who is not only a keen angler but donates much of his free time helping farmers remove introduced pest animals from the landscape.birthday fishing

To this end, we often spend time together at the reloading bench assembling fine-tuned ammunition to ensure pinpoint accuracy in the field when it matters. As we’d not long returned from a fishing and hunting outing, we did something different to our usual local fishing day out. This year, we arranged a trip to the SSAA range at South Ripley to test a few hand loads using new projectiles – shooting them over a chronograph to measure speed and to determine the most accurate powders for each.birthday fishing

Only three days after is number two son Tony’s birthday, so as tradition dictates, we arranged to spend a day on the big lake, kicking back and checking out a few spots we’d not fished for quite a few seasons. Our day was very relaxed – we spent time photographing the abundant birdlife, including an immature swamp harrier as he ghosted along the shoreline, only metres above the grass at near-stalling speed.

As we followed the contour line, we kept an eye on the sounder and verbally noted any interesting traces. Thoroughly ‘chillaxed’, we progressed around the lake’s fringes interrupted occasionally by lure-eating bass rudely disturbing our zen. A fortnight later, an asterisk on the calendar marked granddaughter Violet’s birthday.

And you guessed it… it was back over to the local lake for a morning of wildlife spotting, while in pursuit of a fish that would pull a bit of drag from her favourite purple fishing outfit. All of the usual suspects were encountered along with a few special meetings including a trio of dingo pups, a koala strolling along the shore and we fed a few catfish to the local white-bellied eagle family.birthday fishing

True to form, Violet kicked butt in the fishing stakes – racking up double figures of mostly bass with a pleasing by-catch of golden perch. While birthday outings are done for the year, on the bright side Father’s Day is around the corner.