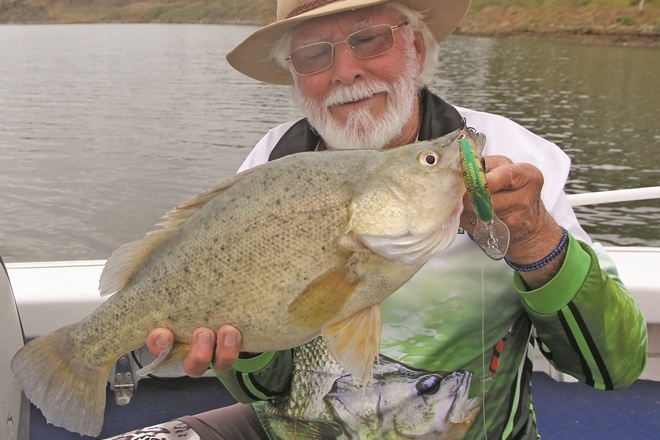 Kevin with one of the golden perch that found the Aussie gold Boomerang to their liking. Note the elbow! This is what a 56cm fish looks like when not held out at arm’s length.

A plan works at Wivenhoe

WHILE chatting with a group of old and new friends around the campfire during a recent hunting trip, the frequency of my team’s successes was commented on. In retrospect, we surmised that significant contributing factors to those attainments were the formulation of practical plans and sticking to them. Wivenhoe plan

This habit has been entrenched in all facets of life – from work, projects at home, hunting, fishing, drag racing and training for marathons. On the fishing front, a couple of recent outings have reinforced the value of planning and groundwork. Coincidentally, both of them involved a day on the water with long time fishing friend and all-round good guy Kevin Clark.

For quite a few years Kev and I have been trying to get together for a day on Wivenhoe Dam to score one of the bruiser bass for which the lake earned a reputation during the 1980s. Life has conspired to prevent this from happening, but the planets finally aligned mid-last year for one morning on the water. Launching at Logan’s Inlet – the first boat on the water – we cruised down the lake at the prescribed six knots, enjoying the cool air and doing a little wildlife spotting along the way.Wivenhoe plan

Previous weeks had seen my kayak scooting around the lake looking for areas that may be holding the big fish, away from the schooling medium-sized fish that are now commonplace. It wasn’t until we approached one of the waypoints I’d saved during those explorations that I rolled the throttle back to trolling speed and we lobbed a couple of lures into the wake. Kevin opted for an ever-reliable purple 65mm Predatek Boomerang but departed from tradition by selecting a medium runner.

I chose a deep 65mm in the pale colour scheme known as Poddy Mullet, just to have a contrasting offering in the water. Serenaded by the quiet rumbling of the Honda idling on the stern and avoiding the deep flats, we managed to steer clear of the swarms of juvenile bass that had been gracing fishing pages on the interweb in the preceding few months. Tacking along the edge of the sunken river channel brought us close to a steep rocky face in an area known as bit of a hotspot for many years.Wivenhoe plan

Kev’s purple lure took the first strike, which was a screamer – stripping line from his light spin outfit in a manner that looked very promising. After the initial enthusiastic exclamations on first sighting the fish, I breathed heavy relief as it was slipped over the waiting landing net – an easy 50 plus stonker. Measuring 53cm fork length, Kev had every right to be chuffed with his Wivenhoe specimen – almost as happy as I was to see our plan yield the hoped-for results.

A couple of weeks ago, Kevin was passing through the Lockyer Valley, so we arranged a stay for a couple of days with us. On this occasion, the plan was to put Kev onto a decent golden perch – a species he’d learned to love in the early days of NSW’s stocked fisheries. After moving closer to the coast a couple of decades ago, Kev had not had the opportunity to experience a hot golden bite. Younger son Tony, his littlest daughter Violet and I undertook a few reconnaissance outings with success.Wivenhoe plan

Having found a reliable stretch of water, we left the fish alone for a month leading up to Kevin’s visit. True to form, we pushed my much-travelled Stessco from the trailer to be the first vessel on the lake. Again, we ploughed along at six knots down the lake to reach the location where the goldens had been biting for us. This time I elected to run one of the new 120mm Predatek Boomerang lures on the chance that there may be a cod in the area, though we’d not encountered any on previous visits.

My selection was also made to give Kevin the shots at the resident golden perch by running a lure that I expected would be too large for them to grab. When unmistakable fish traces showed on the screen of the Garmin, I alerted Kev to be ready for a hit. Right on cue Kev announced the strike as the 65mm Boomerang he was towing was inhaled, presumably by one of the fish we’d seen on the sounder. Hanging deep, the fish exhibited plenty of low-end torque and weight but didn’t speed away, indicating it was possibly our planned target species.Wivenhoe plan

When the large golden appeared from the green depths, it was greeted with huge smiles and much backslapping by a usually cool-headed pair of grey-whiskered anglers. Subsequent passes saw our tally of quality golden perch steadily increase, including a surprising number that hammered the big cod Boomerang I was running. When we called stumps on the session to head home for lunch, we’d passed double figures of our target species.

Yes, it’s great when a plan comes together.