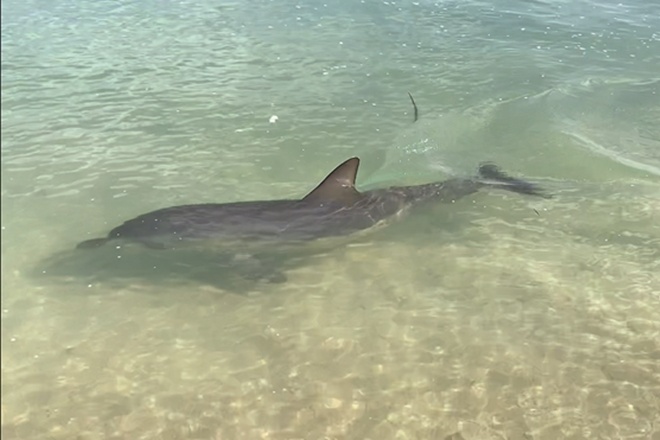 A dolphin cruising past at feeding time.

THIS month, we would like to talk about Monkey Mia in Western Australia. This was definitely on our bucket list of places to see around Australia. I still remember when I was a young whipper snapper seeing a TV program about the wild dolphins in the Monkey Mia region – I was amazed and blown away by them and the scenery on the wild west coast.

This was also a must-see place for my wife Raylene, as she is a bit of a fan of dolphins around Australia. To woo her, one of the first dates I took her on was swimming with the dolphins at Sea World. I have to say we had a fantastic time at the Monkey Mia Dophin Resort, even after hearing conflicting stories about it being overpriced and over publicised, I would have to disagree.

Yes, it was up there in the price range of a good caravan park, but this place was more like a resort for caravanners rather than a caravan park. We were lucky when we were there because it was a quieter season, with just enough travellers for that happy vibe. From amazing amenity blocks – that felt more ‘ensuite in a flash hotel room’ – to the amazing resort-style swimming pools that were surrounded by restaurants and bars.

Plenty of happy hours were available, which funnily enough wasn’t at just one bar – they were spread out over the resort where one happy hour would turn into three by doing a bit of a bar crawl around the resort. Amazing camp kitchens were supplied too, which would have been at home on the MasterChef show, as well as a couple of incredible games rooms – we found ourselves having family ping pong championships and rivalry games between fellow travellers quite often. Monkey Mia

It really was a nice spot for us to just chill out and enjoy the resort-type atmosphere, as we had been doing a lot of free and national park camping. The views from the caravan over Monkey Mia were absolutely breathtaking and we had several beautiful clear days with almost glassed out conditions. We also had a couple of episodes of crazy interaction with the local emus and their chicks, who would come right up to you and scavenge around the camp site looking for anything to eat.

They truly were not fazed by people one bit – they would also make their way into the buffet and restaurants at times for a little poke around to the amusement of diners. The dolphin-feeding experience was incredible, and they were very interactive with people, coming extremely close and a few lucky people were chosen from the crowd to feed these incredible animals. Touching of the dolphins was not allowed, as this can hurt them over a period of time.Monkey Mia

The park rangers were very informative about the movements and family dynamics of the dolphin pod that would come in daily. Not all of the dolphins in the pod would come in, a few would go missing and be replaced by others, but it was cool to see a couple of new mums with their young. They are even cuter when they are tiny.

After dolphin-feeding hours, you could be having a swim in the ocean or paddling on a stand-up paddle board and dolphins would come close to check what you were doing, an experience you weren’t expecting and one you will never forget. Another little past time was to go scooping sand crabs in the crystal-clear water right out the front of the resort. This was so much fun, especially when the whole family and friends are involved, as the crabs would pop out of the sand and start running – the chase was on.Monkey Mia

They changed directions so quickly and all of the sudden they were on your feet or back towards you where the water had been stirred up and anything that touched you was possibly a sand crab, which made people react in unusual ways, with screaming, shouting and lots of laughing. It was a great family activity, not to mention an incredible feed – they are a very sweet meat and are super yummy.Monkey Mia

Whiting fishing just off the beach was also fantastic and the best bait were peeled prawns and cockles, with a simple running sinker to a swivel, about 30cm of light line 4-5lb – the lighter the better – and a small size 4 long-shank hook. Fishing the sand patches in between weed beds worked best. Whiting filleted and crumbed with $5 worth of chips from the shop made a beautiful feed, especially with an entrée of sand crabs.

It truly was paradise. The restaurants also had an amazing menu, which catered for everyone and had great specials. They had buffet breakfasts, lunches and dinners, with a huge selection to choose from. You definitely didn’t need lunch if you had a buffet breakfast. Being at Monkey Mia had been a long time coming for us and it lived up to our expectations.Monkey Mia

A few times we had to pinch ourselves to make sure it was real and wasn’t a dream. We loved the place – a great location to take the family and definitely a place you can relax and unwind, taking in the beautiful surroundings, the incredible nature and amazing wildlife they have on the west coast.

Previous A plan works at Wivenhoe
Next March joy on jacks 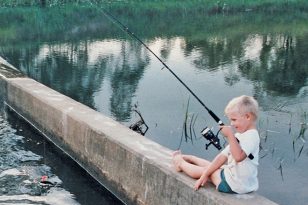 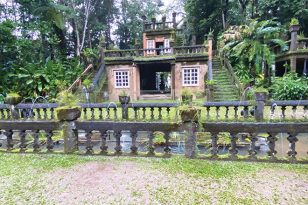