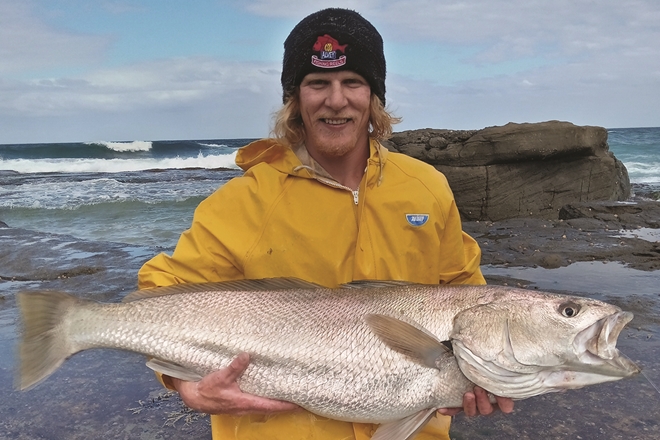 Mischa with a nice 15kg jewfish taken from Iluka Bluff on a soft plastic lure.

EVERY now and then you have one of those dream fishing sessions that you don’t want to ever end – such was the case recently when Mischa decided to have a few casts for jewfish at the southern end of the Iluka Bluff using soft plastic lures. Iluka jew

When he arrived at the headland, gulls and terns were diving on large shoals of white bait seeking shelter in the wash. A 1-2m swell was rolling in and breaking on the reef. On his first cast, a nice school-size jew wacked his lure before he had time to turn the handle, and this set the scene for a couple of hours of fishing that everyone dreams of. The accompanying photos are a small taste of the action because space doesn’t allow for them all.Iluka jew

Needless to say, Mischa hooked and landed around a dozen fish, only keeping a 15kg model, and had more than double the number of strikes and hits without hooking up. If nothing else, it sure blew the old-school theory of ‘not releasing fish where you catch them for fearing of spooking the rest of the school’ right out of the water, and it was only the incoming tide that forced a halt to fishing in safe conditions.

Though the fish were still biting when he left. He returned the following day to catch and release another half dozen barely legal school fish before the wind changed direction, which saw the bait move on. Not to be perturbed, he then flicked the same paddle tail soft plastics along the Iluka breakwall at night for solid fish to 16kg. So, it shows that if you want to consistently catch fish, you have to be adaptable and change location the same as fish do.Iluka jew

October is definitely the month to start haunting your local breakwall during the day with fresh or freshly frozen octopus on a big spring tide, as big smelly jew are around this area all year, they simply change their diet. On the far north coast of NSW, squid and live yellowtail as bait at night will attract jew year-round, so don’t despair if you can’t find time to fish during the day tide. Another species that has been in good numbers around the headlands has been turrum and, while we don’t get monsters as they do in the tropics, there are loads of these hard-fighting fish up to 7kg taking lures currently.

Chopper tailor around 2kg are in reasonable numbers along both Back Beach and Main Beach at Iluka, while on the Yamba side, the rocks at Plumbago and Lovers Point are producing similar classes of fish on lures. Inside the Clarence River, luderick catches are beginning to wane as the bulk of fish move back along breakwalls and headlands for summer. The good news is reports of decent whiting are filtering in and these tasty little critters should be in abundance by the end of October.Iluka jew

Offshore at Woody Head, snapper and smallish teraglin have dominated catches though it won’t be long before the first spotted mackerel of the season begin to get boated. Believe it or not the occasional longtail tuna is still being landed, which is rare at this time of year. For me, September was another month I didn’t pick up a rod mainly due to health issues. Hopefully, I might find the energy to waddle out to the wall with octopus bait during high tide, and maybe even have a cast with live beachworm for a feed of tasty whiting along Shark Bay or the southern bank of Goodwood Island at night.Iluka jew

Regardless of the species you choose to target this month, the fact remains that any day fishing is a great day, and if you happen to do it with a good friend then all the better. I never thought I’d see the day Lisa Simpson and unicorns would have anything whatsoever to do with jew fishing, but I have pics to prove they did and will have them in next month’s column.Iluka jew