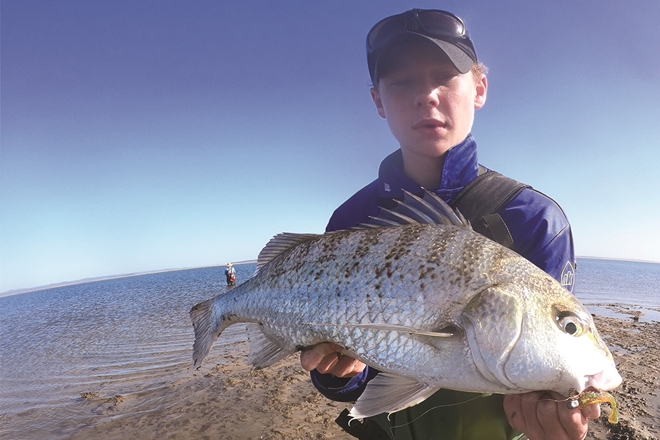 The author’s son Josh with an absolute stonker of a barred javelin he caught on light 6lb Playtpus P8 braid and a light 12lb leader.

Any aggregations of weed on the line and the rods were quickly back on the vehicles and we were off to the next area of cleaner-looking water. Another thing we did was kept our ears to the ground with reliable updates from Drew at Gardiner Fisheries Tackle Shop at Rainbow Beach and Don Butler and his crew from Tackle Giants. As it turned out, the Tackle Giants staff were on the island and did a free slide baiting and drone fishing course, which was excellent.Fraser Island Tough

Jump on the Tackle Giants website for videos and information on where to buy gear – true experts in this field – they are wholesale distributers for Assassin Australia, Kingfisher Australia and CutaCopter. While gutters and weed concentrations changed day-to-day, there were a couple of lessons from our trip and the weeks following. In general, direct westerly wind can help to push weed out but anything with a bit of northerly seems to push weed back in.

An interesting thing about tailor season over the past month was that fish have come on when cleaner water was pushed into deep shore gutters on high tide. This included even the middle of the day. Another successful tactic was berleying gutters with smashed-up pilchards to bring fish in. Bait choice and long casts were another factor when fish were scarce, particularly slightly after dusk.Fraser Island Tough

When bait fishing, I am an unashamed fan of fresh, individually quick-frozen pilchards on Tru-Turn swivel-joined gang hooks for school fish around dawn and dusk. However, after dark, strips of bonito on two gang hooks accounted for some better than average fish caught from the back of the gutter using size 8-9 ball sinkers. On our last full day, we noticed about a dozen schools of tailor 200m out.

I did my best throwing a few very long casts with lures and my Alvey Orbitor SR200, but only managed several stray fish. The lesson could be to try lures if you can see fish but can’t reach them. Try and time a western-side session with a light southeasterly breeze, because anything too calm can make fishing a bit tough. That said, wind under 12-13 knots in most directions can be OK.Fraser Island Tough

The other factor we considered for the western side was tide height. With over 24 years of fishing the island, my diary entries indicated that the best quality and quantity of fish came in the four days leading up to the new and full moon, while after, quality dropped a little but quantity was still good four days post. For flathead we chose bigger spring tides, when the water level drops enough to empty drains and fish concentrate around the entrance of the drains and ledges into deeper water.

That said, you can’t always get the wind and tide on your side. When the wind is coming hard at you side-on, try to position yourself so you’re casting lures or bait with the wind and not against it. On this trip, we managed a couple of very nice mixed-bag sessions in spells of less wind or battled through it to get acceptable catches in periods when it was stronger. Live beachworms cast and retrieved slowly on little 5-5.5” Alveys and 10’6” rods did the job on whiting.Fraser Island Tough

The best action was during the mid-stages of the tide. The most productive locations were edges of higher sandy spits and in the darker shallow drains that were full of yabby holes. On the soft plastic front, we caught a variety of fish including grunter, flathead, bream, tarwhine, estuary cod, swallowtail dart and even a remora! Our tackle of choice was light 6lb Platypus P8 braid, light fluorocarbon leaders of 10-14lb and TTs jig heads and mostly Z-Man soft plastics.

For the jig heads, we used 1/8-1/6oz weights in calmer conditions but went to 1/4oz in stronger wind. Z-Man colours such as Midnight Oil and Motor Oil worked best in clearer water but when stirred up, white and pink colours worked best. I hope these tips help you on your next Fraser Island trip. For more tips and reports, be sure to like my Facebook page, Ontour Fishing Australia, or Instagram by the same name.Fraser Island Tough

Until next month, cheers.

Sean caught the fishing bug bad one very cold Canberra day 20 years ago when he was bored and picked up and read Angler's Almanac by the fireplace. Since then he has filled his mind with knowledge from fishing magazines, books, the internet, TAFE fishing courses, guiding fishing charters (estuaries, beach, bay and mountain lakes) and of course 'on water' experience. He and a group of mates formed a social fishing club and soon started to share what they learnt and caught online. Sean is the admin for Ontour Fishing Australia on Facebook, which is a page that shares information, reports and sponsor giveaways and welcomes all to the site. He plans to move into blogging on his new website when time allows.
Previous Unforgettable jew session at Iluka
Next Warm weather wakes up Noosa fishing

Benefits of a fishing guide

Plenty of options for a festive fish

WELL, it’s that time of year again when the jolly old fellow in red will …