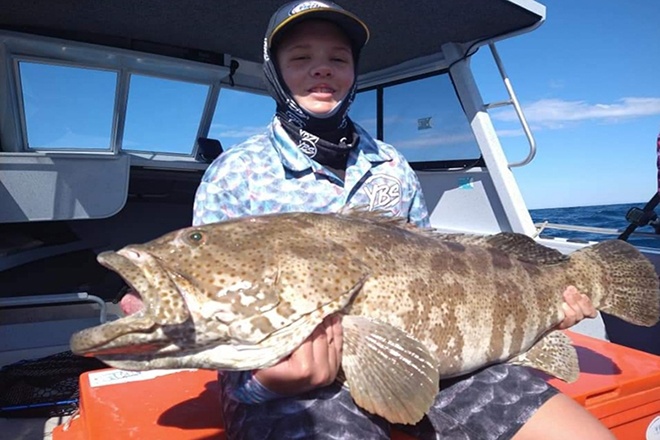 Kahn Ashmore with an awesome cod he caught on board Truansea Charters off Bundaberg recently.

Firstly, the weather isn’t looking too good for the weekend. For the anglers that got out over the last week, there was some nice red emperor, grassy sweet lip, coral trout, cod, red throat emperor, parrot fish and hussar.  The baits used have been squid, pilchard and yuccas. The rigs that have been used are paternoster with single or double hook or a running ball sinker to a set of gang hooks.  The weather can change at any moment so always check the current conditions before heading out.

THE BURNETT RIVER
The river is starting to warm up, which means there will be a few mangrove jack and barramundi starting to move about. The flathead have been on the chew and there has been some nice whiting caught in the river and around the mouth of the Burnett River system. The bait of choice for the whiting is a fresh yabbie or beach worm. There has been some nice grunter still being caught around the sand flats. The rock walls in the river have also been producing some nice bream and there has also been reports of some good size prawns caught in the river around the port and Strathdees.

There has been nice flathead, whiting and bream caught lately in these river systems. The best method has been drifting over the sand flats in both systems with yabbies, beach worms and peeled prawns. The start of the run in has been producing the best results. Trolling has also been producing the flathead using a Tango Shad and the Tilsan Minnow.

With the little bit of warm weather the barra have been active lately. They have been caught on the shallow flats and along the tree lines. There is some weed starting to grow around the edges again. I like to fish down the face of the weed edge either using a Jackall Squirrel or a 4 to 7 inch plastic. I have found a long cast and a slow roll has been producing the bites. With the dam at 37% capacity, just keep an eye out for the new trees and stumps that are starting to pop up. With the warmer days, the better time to fish has been late arvo into the night due to the warmer water.