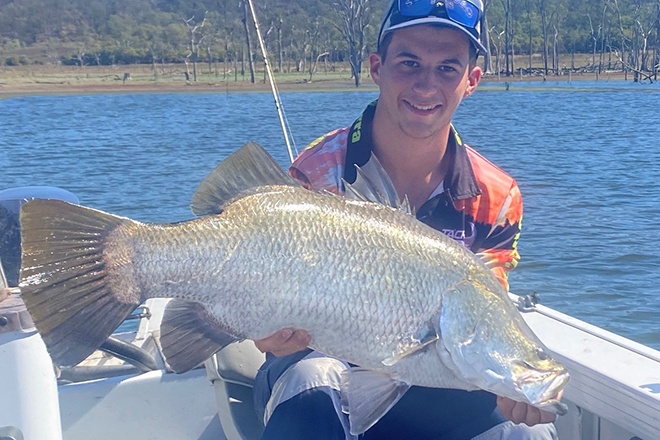 Tom Ellem with a beaut barramundi caught at Lake Monduran.

The weather for this weekend is looking pretty good for offshore fishing. Reports in from last week have included good sized red emperor, coral trout, parrot and large sized cod. For offshore fishers, this weekend there is a Reef Fin Fish closure starting from midnight Saturday October 2 through to Thursday October 7, 2021. Remember to always check your latest weather forecast before heading out.

For the smaller tinnies that want to get out and get a feed this week, we have had good reports of plenty of schoolie mackerel on the inshore reefs. Casting out slugs or trolling smaller sized hard bodies will get you a feed. For the bait fisherman, float out a pilchard on a set of gangs. With the water temperature still on the cool side, reports of good-sized snapper have also been caught.

The Burnett can sometimes be a hit and miss river. Certain parts of the tide can turn fish on to feed and being in the right area at the right time can be the difference of taking home a feed or not. We have had good reports from those that have been trolling along the rock walls, consistently catching flathead, grunter and large estuary cod. With water temperature slowly on the rise the mighty mangrove jack and barramundi will start to be more of a common catch. Floating out a piece of fresh mullet or live sprat along the mangroves or rocky outcrops will put the percentages in your favour. With a good down pour of rain during the week this may get the mud crabs on the move, so be sure to put the pots in before heading out for a fish.

THE KOLAN RIVER AND BAFFLE CREEEK

With the Baffle Creek Fishing competition coming to an end over the past weekend, we received good reports of plenty of mangrove jack, grunter, flathead, whiting, bream, estuary cod and a couple of mud crabs being measured in. A great weekend was had by all. The Kolan River has also been fishing well with a few grunter, whiting, and mangrove jack being reported. As the water warms, the mangrove jack and barramundi will become more active and easier to catch.

With the wind blowing a constant northerly over the past couple of weeks, Lake Monduran has been on fire. Slow rolling 5” to 7” soft plastics such as Molix 140 Shad, 7” Castaics, and 6” Hollow bellies and swim baits like Zerek live mullet and Barambah mullet have all been taking their fair share of fish. Finding the fish in the lake has been the easy part. Following that wind into bays and off points where they have been hanging and being there at the right time when they feed can be key. Barra can be very finicky but when in feeding mode you could catch six barra in a short period of time within 20 casts or cast 300 times for one barra. Learning to be on the water at these key times will lift your catch rate in your favour.