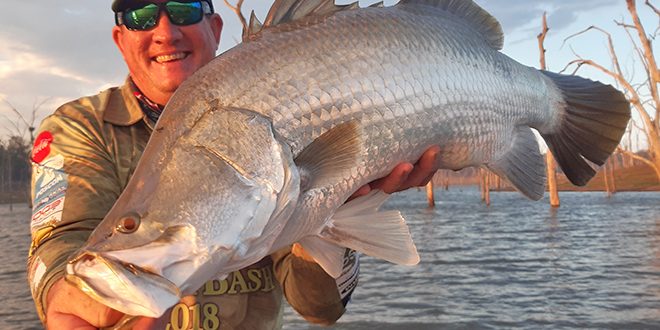 With the threat of a thunderstorm most afternoons, it’s difficult to predict what the weather will do this weekend. With the full moon on Thursday night, the bigger tide should get the mud crabs moving and the fish on the chew in our rivers and creeks. As always, check the current weather conditions before heading out.

With a bit of luck there may be a chance to slip out to our inshore reefs and get stuck into the school mackerel which are thick right along our coastline at the moment. Casting Flasha spoons is an exciting way to catch these speedsters.

The Burnett River has been producing some very nice flathead, grunter, bream and mangrove jack. I’ve heard reports of mangrove jack up to 60cm and the occasional barramundi being caught in the upper reaches of the Burnett around the rock bars. As I mentioned earlier, the full moon on Thursday night should fire the mud crabs up in the mangroves and summer whiting on the many sand flats in the Burnett.

THE KOLAN RIVER AND BAFFLE CREEEK

There have been some very nice mangrove jack caught up the Baffle and the Kolan over the past week. Slow rolling paddle tail soft plastics out of the mangroves and over rock bars have been getting most of the action. There have also been a few anglers smacking jack on surface lures, with the 95mm MMD Splash Prawns a standout performer. Early morning and late afternoons are prime times to target jack on top water. Good numbers of flathead and whiting around the mouth of these systems have been keeping anglers entertained.

How good was it to see so many anglers up at Lake Monduran for the opening weekend of the Tackle World Bundaberg Lake Monduran Family Fishing Classic – online format. It was terrific to see so many barra on the chew and I know of at least three people who caught their first ever barra at Lake Monduran last weekend. The hot technique has been locating barra holding off shallow points and bays and casting lures such as the Molix 140 Swimbaits or the 130 Squidgy Pro Slick Rigs around these areas. Trolling lures like the Jackall Squirrell in these same areas has also worked well for anglers who are not very good at casting lures.