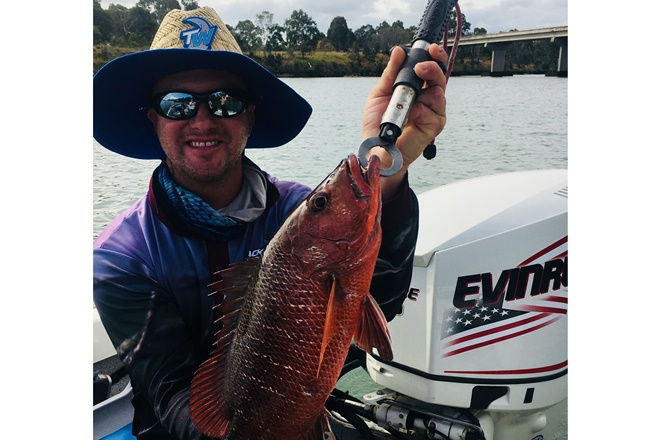 How good was last weekend’s VMR Family Fishing Classic?  It was fantastic to see that the number of nominations was more than last year’s event.  Even though the weather was a little bit ordinary, keen anglers still managed to weigh in some quality fish from both the estuaries and the blue water.   With the amount of prizes given away all weekend, this is one of the best fishing competitions in Queensland.

Even though the forecast for the Bundaberg area was not ideal, quite a few bigger boats still headed offshore.  The anglers who braved the rough conditions still managed to land some fantastic reef fish, including some big red emperor, lots of cobia, snapper, sweetlip, coral trout and parrot.

With the big swell out wide, a good number of anglers opted to fish the many inshore reefs along the Bundaberg coastline.  Good numbers of long tail and mac tuna, schoolie mackerel, trevally, grass sweetlip and some big grunter were caught and weighed in at the VMR competition.

It seemed that the good old Burnett River was the place to be last weekend.  With so many boats on the river, it was great to see the Burnett fishing so well.  Big numbers of grunter, bream, flathead and even a few cracker whiting were caught, weighed in and tagged by the Bundaberg Sports Fishing Club members all weekend.  Rumour has it that there are still a few mud crabs getting around as well as good numbers of blue salmon.  A few mangrove jack have been caught in the town reach using live bait

Both Baffle Creek and the Kolan River usually fish very well at this time of the year.  The mouths have been producing some good quality tailor, dart, queenfish and jewfish, whereas further upstream the sand flats have seen some fantastic flathead, grunter and summer whiting caught on fresh yabbies and prawns.

A few barra have fired up this week at Lake Monduran.  The key is to fish the shallows in the backs of the bays where the water temperature can be lightly warmer.  Casting suspending hard body lures with long pauses into the snags has resulted in some nice barra up to 85cm and bass to 54cm being caught this past week.

The water level at Lake Gregory is very low, making it very difficult to put your boat in or out, so at the moment this impoundment will be restricted to kayaks or canoes only.

Just finally, good luck to the Bundaberg anglers who are fishing the two ABT rounds at Lake Boondooma and Lake Cania next week.