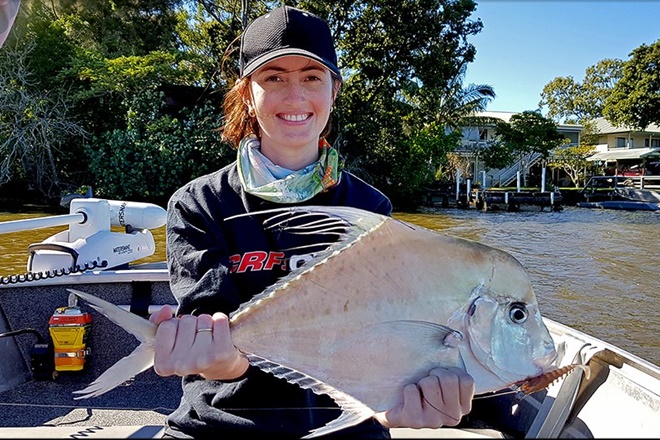 Michael Lever's girlfriend Meagan caught this stonker 60cm Diamond Trevally on Tuesday morning at Tewantin. She was using a Squidgie Prawn soft plastic and hooked up on the first drift. After a good fight, she managed to land it and get a photo before releasing it. Photo: www.fishingnoosa.com.au

Now that we are moving into the coolest part of the year, the water temperatures have really come down. This is great news for anglers on the beaches as the cooler weather species like bream are really starting to show up with good numbers of fish over the 30cm mark being taken. Just remember if you get a real big one “40cm-plus” this is a very old fish and great breeding stock, so best to take a photo and release it to continue the betterment of the species. Another great species coming from the beach has been tailor and the quality and size of the schools has really started to improve, plenty of fish have been taken from the Noosa North Shore with most fish chopper size with the odd green back amongst them, pilchards, fresh mullet and bonito fillet has been the go to bait.  Prawns, worms and whitebait have all been working well on the dart and whiting. There are plenty of good gutter around at the moment so best to head to the beach at the start of the run in tide to spot the best ones to fish. Don’t forget those worming pliers at the moment as there are plenty of worms on offer on the low tide.

Offshore things are really starting to change as anglers shift their focus from pelagics to more reef species. The closer reefs like Jew Sholes, Sunshine and Halls, have been firing and producing quite a number of good sized fish; Sunshine has been good for sweet lip, coral trout, squire, venus tusk fish and maori cod. Lightly weighted whole pilchards and live baits have been working the best. 40-gram micro jigs worked slowly off the bottom are working well on the bigger sweetlip and squire, give the Storm Slow Rocker a go!  Live baits rigged with 7/0 octopus circle hooks and size 8 ball sinker have been great on the trout. Halls reef has seen broad bar mackerel, cobia and sweetlip while Jew Sholes has seen the odd tuna, perfect for chasing the tuna are Jackson Kaiken Stickbaits in 120mm size or Nomad Madscad 95mm with a fast-constant retrieve working best. North Reef has also been firing with some great fish on offer; Snapper, cobia, jewfish, pearl perch and sweetlip have all found their way into the boat. Constant burley trails have been the best technique in getting the bigger snapper and cobia. Fishing whole pilchard and squid baits on paternoster rigs with 4-6oz snapper sinkers has been working as well. For the angler that have been making the trip to the outer deeper reefs there are some great quality fish hitting the decks including snapper to 5kg, bigger pearl perch, kingies, jew, monster nannygai and samson fish.

In the Noosa River; the mouth has been one of the prime spots with bream, tailor and trevally all taken on the incoming tide, again bait has been the most popular but some angler have been using lighter gear with smaller soft plastics, cast out with a fairly quick retrieve these soft plastics have been chomped buy some big fish. Whiting number are still good with plenty of fish taken around the frying pan and the dog beach, as always fresh is best so live worms and freshly pumped yabbies have been the gun baits.  Heading upstream, Woods Bays and the back of the Noosa sound is fishing well for trevally, tailor, queenfish and large bream.  The evening tide and the waning moon have been ideal conditions for a night fish. For those that struggle with the cold, the mornings have been pretty mild so getting out early and fishing surface with walker and poppers like the Nomad dart wings, Strada 80mm tournament poppers and the Zipbaits Skinny pop has been very successful. Upriver, the area from Tewantin Boat Harbour up to the Lakes has seen some great flathead action, with soft plastic vibes like the Samaki Thumper Tails fished close to the bottom really stirring up the fish. The other advantage about using a lure such as this; is it offers the chance of tangling with some bigger bi-catch such as mangrove jacks, school jew and even a threadfin salmon.