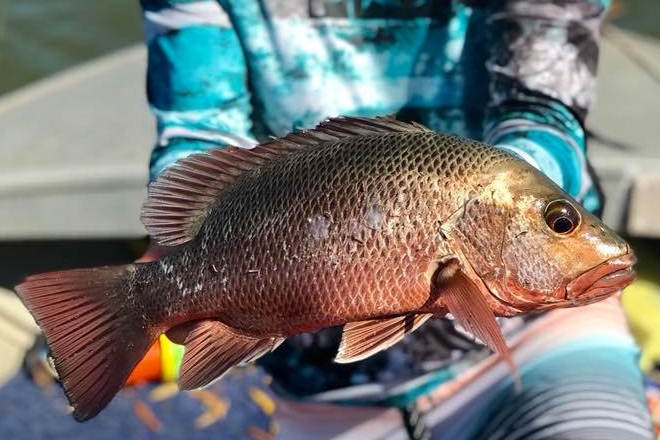 Burnett River a hive of activity

Well, we are now a few weeks into the New Year and boy, has it gone quickly!  But, as each week passes, the local rivers and creeks around the Bundaberg area are cleaning up day by day.

With this, the fishing is also improving.  Most of the fishing has been done around the river mouths.

The Baffle is still dirty in the upper reaches, but is worthy of a fish around the mouth, where some big grunter, bream and a few flathead have been caught.  There has also been some big dart at the very mouth of the Baffle on the run-in tide.

There are similar conditions in the Kolan River with the cleanest water being around the mouth also.  Some of the sand flats towards the old mouth have held some quality whiting and flathead.  Further upstream has seen a few big grunter and the odd mangrove jack.

The Burnett River is still producing some great fishing sessions.  The upper reaches have been producing some whiting and a few sickle fish.  Some areas midstream have held a few nice grunter and big numbers of bream.  Some of the bream are big, being up to 42cm long and at this size they are great fighters and are also great to eat.

The rock walls down around the Burnett River mouth are also holding the bream, but there are also good numbers of cod and mangrove jacks.  A few school mackerel have been caught out around the river mouth amongst the lead markers.

The Elliott River is also fishing well with a mix of dart, whiting and a few flathead all being caught.


A few days earlier this week saw a few boats head offshore.  A mixed bag of reef fish were caught but there were plenty of spanish mackerel about, so floating large dead baits or trolling big lures such as the Halco Laser Pro 190 was the way to catch a big Spanish.

A bit of stable weather this week saw a few barra caught at Lake Monduran.  Most of the barra are up to 70cm but are great to catch at this size.  The key to catching the barra is to use a smaller lure.