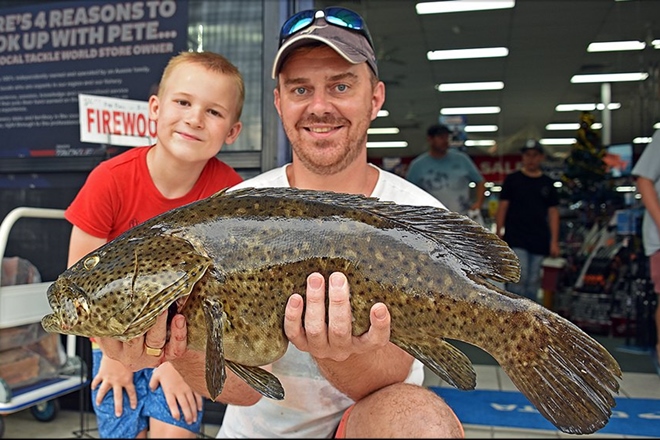 At 6kg on the Davo's scales, this estuary cod is the biggest fish that Phil has ever caught in the river. Photo: fishingnoosa.com.au

With water temperatures right up there, the Noosa River has seen plenty of quality school holiday fishing over the past week. Good size flathead have been taken on soft plastics with the brighter colours seeming to produce the better fish, for the bait anglers; small pilchards, hardy heads and white bait on small ganged hooks have claimed some nice fish. Some of the hot spots have been around the sand banks near the mouth, back of the Noosa Sound and the entrance to the first lake. Good numbers of quality whiting have been throughout the river particularly in lower reaches. Surface lures like the Bassday Sugapen in the 70mm size and the Shimano Risepop in the 50mm size have been the lure of choice for anglers. If using bait, live worms and yabbies have been the best producing bait. There has been some good quality mangrove jack stretching the arms of angler in the river at the moment, most of the action has been happening after dark with live baits and strip baits like bonito and mullet claiming the better fish, fishing around heavy structure seems to be the key with some fish coming out to feed on the cover of darkness. Paddle tail soft plastic in the 4inch size like the Keitech Easy Shiner and the Zman Minnowz have also been perfect for enticing these brutes. Bream are still on the chew in good numbers throughout the river system providing plenty of entertainment for the kids, peeled prawns are a great bait. Get those crab pots out with good crabs around Weyba creek and the ski run stretches, pots baited with fresh mullet have produced the better sized bucks.

On the Offshore scene; most of the good of weather windows have been in the mornings so anglers have been at the boat ramps before dawn and heading back before the breezes pick up. With plenty of mackerel showing up (both spotted and spanish) the talk has been all about the pelagics. Noosa has been blessed with plenty of quality of fish coming from most reefs, it has been all about the large bait schools that have been about and as soon as you see those schools on the sounder or by the birds working you will more than likely have a solid hook up. I would suggest having a pilchard or a slimy out the back on one of Davo’s very special, Spanish Specials rigs while fishing in these areas. These rigs are dynamite and have been developed by our Noosa team especially for those big spanish. For the bottom bouncers with larger craft, catches of quality snapper and pearlies have been reported from the Hards and Barwon Banks. If you are not wanting to travel big distances try north reef for snapper, pearlies and cobia or the popular Halls and Sunshine Reefs with the catches of snapper, sweetlip, cod and trout at first and last light.  For bait anglers these fish have been taken on pillies, squid and slimy mackerel. Soft plastics and slow fall jigs like the Shimano Wonderfall jigs have also been getting plenty of action. Spanner crabs have again been reported from around the 35m line, there are plenty of dillies available from our Noosa store so come and have a chat to the crew.

If heading up the beach there is a good number of Whiting and Dart in the shallow water gutters, fishing with live worms or pipis have been producing the best results. The tailor angler have seen some quality fish with the best action dusk and dawn from north of Teewah. Flathead have also been reported in sitting at the rear of the gutter, prawns, strip baits and of course the trusty pilchard have been tempting the lizards. For the rock hoppers getting out early is the key, fast moving lures Like the Gt Ice Creams cast long distances and retrieved at speed have claimed some good trevally, spotted mackerel and Mack tuna.