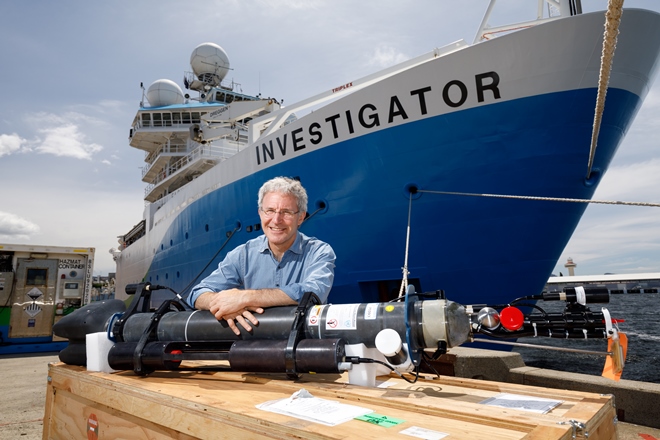 Dr Steve Rintoul is leading research to the Antarctic edge, deploying the first ever deep Argo floats in the region. Photograph by Peter Mathew

CSIRO dives deeper than ever for climate answers

FOR the first time, scientists will deploy new-model deep sea Argo floats in the Southern Ocean that will help build our understanding of oceans, how they are warming and the impact on our climate.

A global network of over 3800 Argo floats already provide us with an understanding of ocean temperature and salinity up to 2000m, however these new generation, data-collecting, autonomous ocean robots will provide unprecedented information about oceans up to depths of 5000m.

The deep water Argo floats will be deployed as part of a six-week research expedition that recently set sail for Antarctica aboard CSIRO’s Research Vessel Investigator.

Researchers will be investigating climate contributions of the deep ocean, clouds and atmospheric aerosols through a series of projects that will fill information gaps about the magnitude and pace of future climate change.

Voyage Chief Scientist Dr Steve Rintoul, from CSIRO and the Antarctic Climate and Ecosystems CRC, said research from the voyage would provide unique information about the Southern Hemisphere’s ocean’s capacity to continue to absorb heat and carbon dioxide.

“The world’s climate is strongly influenced by the oceans, and the vast Southern Ocean plays a major role in how climate variability and change will play out in future decades,” Dr Rintoul said.

“We already know that the Southern Ocean makes important contributions to global sea level change through taking up more heat than any other ocean on Earth and through influencing how fast the Antarctic Ice Sheet loses mass. To understand this system we need comprehensive and continuous measurements over a huge area of ocean, which has been very difficult in the past.”

Dr Rintoul’s team will be deploying 11 deep-water floats near the Antarctic edge that have been supplied by the Scripps Research Institute (US), Japan Agency for Marine-Earth Science and Technology, and Laboratoire d’Océanographie et du Climat.

“It’s the first time these next-generation deep water Argo floats will be deployed near Antarctica. By providing year-round measurements through the full ocean depth, the floats will fill a massive data gap for the climate research community,” Dr Rintoul said.

Scientists from the Antarctic Climate and Ecosystems Cooperative Research Centre will also be making measurements of trace elements like iron, using ultra-clean techniques to avoid contamination.  Phytoplankton, like humans, need small amounts of iron to be healthy. The voyage will help identify what controls how much biological activity occurs in the Southern Ocean.

During the Investigator’s journey, an international team of scientists from agencies including CSIRO, the Australian Bureau of Meteorology, the US National Centre for Atmospheric Research, and the University of Utah, will conduct experiments to explore the interaction between aerosols and clouds.

Clouds and aerosols, which occur naturally and from greenhouse gases, both reflect and absorb heat from the sun, but as greenhouse gases change globally, so will this interaction.

Bureau of Meteorology Project Leader Dr Alain Protat said that the experiments will use a unique combination of aircraft, ship-based and satellite observations to collect detailed data on clouds and the interactions between incoming radiation, aerosol production, and then the formation of precipitation.

“The Southern Ocean region is the cloudiest place on Earth, yet we don’t understand why these clouds are different from clouds in other regions – the lack of pollution over this remote region is a possible explanation, which we will explore with these unprecedented observations,” Dr Protat said.

“We know from reference satellite observations that global climate models struggle to represent the energy balance at the Earth’s surface over the Southern Ocean region, and what that means for the accuracy of future climate predictions is largely unknown. The complexity of the problem requires collocated, state-of-the art, measurements of aerosol, clouds, precipitation and radiation to understand the interactions and feedbacks between them.”

Ocean and atmospheric research conducted aboard the Investigator will provide valuable and unique insights to inform knowledge of climate change and sea level rise projections.

The Investigator is run by the Marine National Facility and is Australia’s only blue-water research vessel, enabling scientists from across Australia and the world to study from the equator to Antarctica.