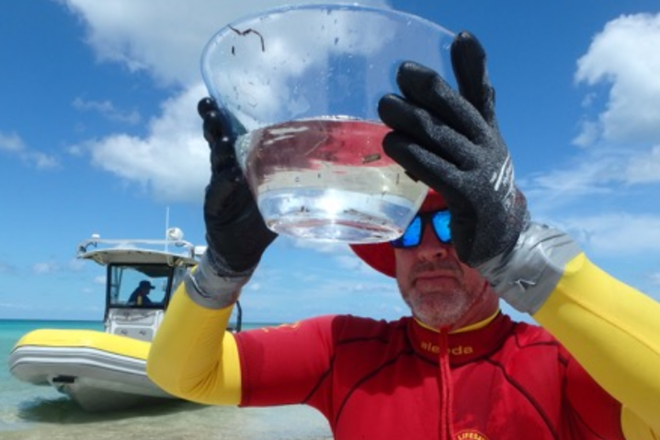 SURF Life Saving Queensland can confirm an irukandji has been found at Arch Cliff on Fraser Island during a drag conducted by surf lifesavers on Sunday, January 7.

The specimen was sent to Assoc Prof Jamie Seymour at James Cook University to conclusively identify the species, which has been confirmed as a carukia barnesi, a true irukandji. SLSQ has been conducting stinger drags, along with a public awareness and education campaign, on the western side of Fraser Island since December 27. The new initiative rolled out this year, with SLSQ lifeguards and surf lifesavers travelling to the island to conduct daily stinger drags, while giving beachgoers information on the potential risks of entering the water as well as marine stinger treatment advice.

SLSQ regional manager Craig Holden explains the discovery of the irukandji means beachgoers on the western side of Fraser Island must remain extra vigilant about their personal safety. “We’re urging everyone to stay out of the water entirely on that western side of the island while conditions are hot and humid,” he said. “If anyone is stung on Fraser Island they should douse the area with vinegar as soon as possible and immediately call triple zero to seek emergency medical assistance. We don’t want to cause widespread panic, but it is really important for people to exercise caution and put safety first at all times. This includes taking a bottle of vinegar with you if you are heading to the island, to be prepared to treat a sting.”

A spate of serious stings on Fraser Island reported in 2016/2017 led to SLSQ conducting drags in January 2017. While nothing was found during that time by surf lifesavers, Dr. Seymour conducted separate drags and found a specimen, leading SLSQ to upgrade stinger safety advice within the region.

SLSQ will continue to conduct daily stinger drags on the western side of Fraser Island, while informing campers and beachgoers in the area on the risks associated on entering the water and handing out marine stinger treatment information, until January 21.

Stinger safety tips:
• Wear protective clothing (wet suit or Lycra body suit), to reduce exposure to potential stings;
• Protect your face and avoid putting your head underwater at high-risk locations;
• In the absence of a full Lycra suit, wear other protective clothing such as long pants tucked into socks; and
• Enter water slowly as marine stingers will often swim away from people given the opportunity and time; and
• If you are planning a trip to Fraser Island, take vinegar with you.

Treatment:
1. Remove casualty from the water if safe to do so
2. Treat using DRSABCD first aid method
3. Call for help – dial triple zero (000) for medical assistance
4. Promptly administer CPR if required
5. Treat the sting – douse the area liberally with vinegar for at least 30 seconds
6. Monitor the casualty and seek further medical assistance if available

Note: Because the symptoms of irukandji syndrome may take time to appear following a sting, all tropical jellyfish stings should be doused with vinegar and the casualty should remain out of the water, in a safe location with someone to monitor them, for at least 45 minutes, as the casualty may appear stable initially before the onset of symptoms.