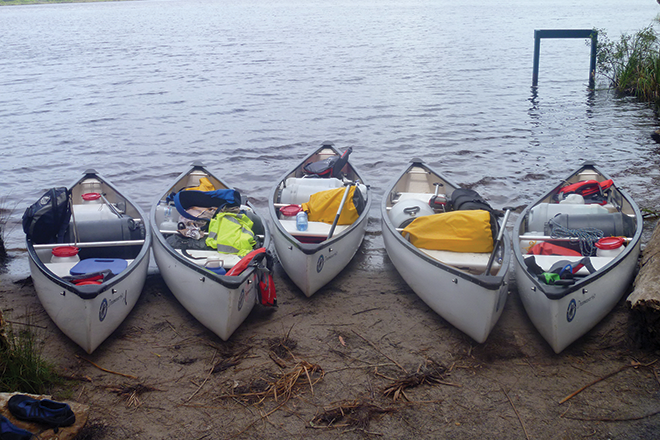 Canoes on the Noosa Everglades as part of a Duke of Edinburgh trip along the length of the Noosa River.

CANOE go camping? Yes, I’ll admit I love canoe puns, they never seem to get old for me. Something else that doesn’t get old for me is canoe camping around southeast Queensland. The attraction very much lies in the simplicity of it.

Loading a bunch of gear into a canoe and getting on the water is easier than most people realise, so here’s a bunch of reasons why I think camping from a canoe is one of the most underrated experiences you can have with your family in the great outdoors.

The first is carrying capacity. The misconception most people have about camping from a canoe is you need a high-tech backpack and ultra-lightweight, space-age camping gear. The perceived effort involved seems to stifle the urge to ‘just do it’.

Unlike a kayak paddler or hiker, the canoe paddler is not obsessed with every kilogram going into their pack. Most two-person canoes have a carrying capacity over 300kg, which means that even with two burly blokes paddling you still have room for 100kg of gear!

Gone is the worry of buying ultra-light tents and camping gear, or for that matter having to carry freeze-dried foodstuffs.The canoe camper has the capacity to carry ample provisions, camp chairs, standard tents and even a few cold beverages.Which leads to the second reason: cost.

Not having to buy expensive lightweight gear significantly reduces the cost of camping gear. Most people have a basic camping setup stored somewhere in their back room. A canoe’s larger carrying capacity is usually more than adequate to carry the average setup, plus the cargo area in the centre of a canoe is like the tray of a ute.

The only limit is your imagination! In addition, canoes themselves are quite inexpensive when compared to other expedition watercraft. An average canoe suitable for camping will cost between $1500 and $2000, compared to an equivalent kayak that will often range from $2000 upwards.

Note here I said suitable for camping. A 10’ sit-on-top kayak is not really going to cut it for multi-day camping trips. Carrying a canoe is also a simple matter. The best way to carry a canoe is upside down on standard roof bars, riding on its gunwales.
No need for expensive cradles or tie-downs and you’re able to have gear stowed inside the hull if you’re short of space. The third reason is simplicity.That canoe design has remained largely unchanged for thousands of years is no big surprise.

The secret to their effectiveness lies in their simplicity of design: an open-top boat with enough beam to carry large loads and remain stable but with sleek-enough lines to be powered easily by one or two paddlers (or more, if you consider the famous voyageur canoes of Canada).

What this delivers to modern-day paddlers wanting to get away from it all is a craft that is easy to paddle, can carry heaps of gear, is easy to load and unload, and is robust and most importantly versatile.

What more could you want? The last and perhaps most compelling reason is location.
We are blessed in southeast Queensland with a range of wonderful waterways with campgrounds located along their banks.

A few of my favourites are listed below.

Access to the campsite is via hiking, cycling, horseback riding or paddling. The paddle trip is an easy 6km journey from the boat ramp near the dam wall, with camping available either in the old homestead or surrounding grounds located on top of the ridge. It’s a great stop-off point if you’re doing a paddle to Lilydale camp at the other end of the dam.

The navigable length of the upper Brisbane River is 56km, with numerous campsites along the way (some by prior arrangement with landholders). The river lends itself very nicely to downstream canoe journeys and a local shuttle service is available for shorter durations.

Queensland National Parks and Wildlife Service has done an amazing job of preserving this pristine wilderness and converting it into one of the premier paddling destinations in the world. Extensive camping sites are available from Fig Tree Point at the start of the everglades to Harry’s Hut and right through to campsite 15, located 40km upstream.
With the exception of Harry’s, all these sites are hike-in or paddle-in only.

While different from the others in that access to the campground can be had via motorised vehicles, Wivenhoe has the potential to offer a great canoe camping experience. Our suggested journey would be from Harmon Cove through to Captain Logan campground, camping the night there.

The second day’s journey would then be from Captain Logan across to Billies Bay. Alternatively, you could camp at Captain Logan and do day trips from there. Both are awesome! Other notable mentions are Bribie Passage, Mary River and if you fancy venturing south of the border: the Clarence and Nymboida rivers.

Just remember, the only thing more enjoyable than camping from a canoe is camping with a whole bunch of canoes, so bring your friends! If you require any more information about camping from canoes and destinations in southeast Queensland, give me a call at One Tree Canoe Company on 0424 001 646 or check out onetreecanoe.com