The entire line-up of Queensland competitors and staff during round two at Maroon Dam. 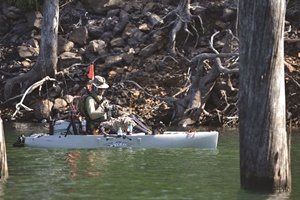 THE Yak Hunters Kayak Fishing Series has emerged as one of the fastest-growing and most-inclusive fishing tournaments to hit the Australian kayak fishing scene in recent times.

Run by the team at Yak Hunters Australia, this series was established in 2018 and released in Queensland, NSW, Victoria and South Australia, and in 2019 it has expanded to include Tasmania and Western Australia as well. With no fancy equipment needed (other than a simple kayak, a fishing rod and a few lures of course!), you can enter the competition in either Elite or Amateur class and battle it out with other anglers across the country for fantastic cash and prizes.

Round two of the Yak Hunters Kayak Fishing Series for 2019 was held on April 28 and record numbers turned out to fight for bragging rights to be heralded as the top kayak fisho in the land. The tournament series is conducted over four rounds, with points totals accumulating across the rounds to crown two champions at the end of the year in Elite and Amateur classes.

There are of course winners in each state and division for every round and the competition was hot during April, with 190 anglers taking to the water and an immense 86 anglers paddling onto picturesque Maroon Dam in Queensland. This is a unique competition in that each state hits the water on the same day, has its own target species and has a points system that allows a truly national competition to unfold.

Each state group holds local events, competitions and community projects outside of the Kayak Fishing Series to connect kayak fishos. No matter what state you are in, if you are a seasoned angler or looking to get into the sport, you will find like-minded men and women, great advice, handy product awareness, tips, tricks and a few new friendships waiting for you throughout the national Yak Hunters Australia community.

Round three of the Yak Hunters Kayak Fishing Series kicks off on September 8 and you can find out more about the tournaments and Yak Hunters Australia via yakhunters.com or Facebook where you can jump on the national page or any of the state-based pages that now boast over 13,000 followers.