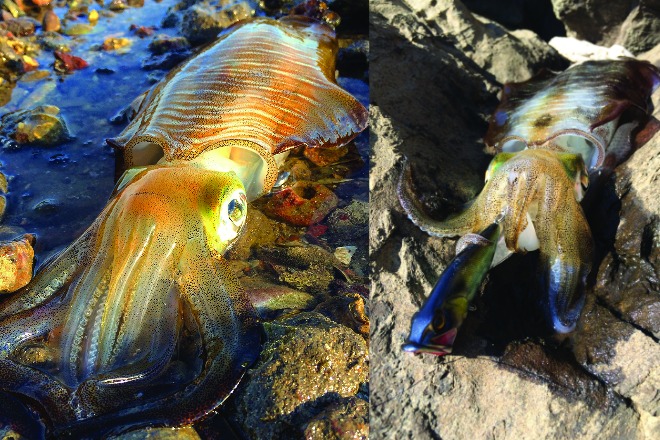 How to Catch Tiger Squid in the Shallows

The whistling northeasterly wind has stopped, the water on the western side of Moreton Bay has cleaned up and the tiger squid have moved into the shallows along the western waterfront.

Tiger squid live and feed in clean water, not cold water as some people mistakenly believe. The biggest tip-off to this inaccuracy is tiger squid or northern calamari is a tropical squid species that inhabits the coastline all the way north to Cape York.

This observation tells us that tiger squid don’t much care for cold water but prefer temperate and tropical climates. The warm winter days when a light easterly springs up are usually very productive because that little lift in temperature gets the squid moving.

At the time of writing the water is particularly clear along the Redcliffe foreshore and more like water usually seen in July after the westerly wind. The water being so clean opens up opportunities to explore new ground because the reef and seagrass banks can be seen at any stage of the tide during the day.

Google Earth is your friend when looking for new areas to target, and in particular a feature called Historical Imagery. Use this tool to track down overhead pictures taken while the water is clean, which will give you a search area to then target on foot or in a boat.

In the past few seasons I have changed my approach slightly and more or less just for the fun of it now do most of my squid fishing on foot and more importantly at low tide when I can wade out into the reef and weed banks to fish the areas where the squid have consistent water to live and feed in. Sight casting to any target is a heap of fun but sight casting to tiger squid is a particularly cool way to spend your day.

Watching these creatures advance and retreat from a jig in clear water will teach you more about squid movement and body language than I could ever convey through text. The way they hold their candles (longer tentacles) while approaching the jig is a good tell-tale of their intent. If the candles are tucked downwards and along the underside of the body while moving towards the jig, this usually means they are just following the jig to investigate further and you may need to change the retrieve or change jigs to get a take.

If they approach the jig with their candles in front of their eyes, expect the squid to launch an attack once in range. This is when you should slow down and basically let the squid eat the jig. Once you have stalled the jig and the squid has hit it, it is sometimes hard to know when to load up on the squid unless of course the squid is swimming away and loads the rod with its own weight.

My method is to slowly try to take the jig away from the squid, and as soon as I feel a little weight and know the squid has a good hold of the jig I’ll set the barbs with a smooth but deliberate loading of the rod; not quite a strike as such but a definite application of extra pressure.

Long exploratory casts over the reef retrieved at a brisk rate and then slowed so you can watch for followers is a good technique for covering new ground in shallow water because you will see the squid break cover and chase the jig.

As mentioned, the water is very clean and I expect this will continue through into winter. This is important because squid have very good eyesight, and if they are being cautious, long fluorocarbon leaders under 10lb will make a difference when trying to sell a jig to a wary buyer. If you find a pack of hungry squid in the mood to chew it won’t matter as much, but it is best to apply the tactics for enticing hard to catch squid to all squid fishing so you maximise your chances of getting every squid you come across to eat the jig. 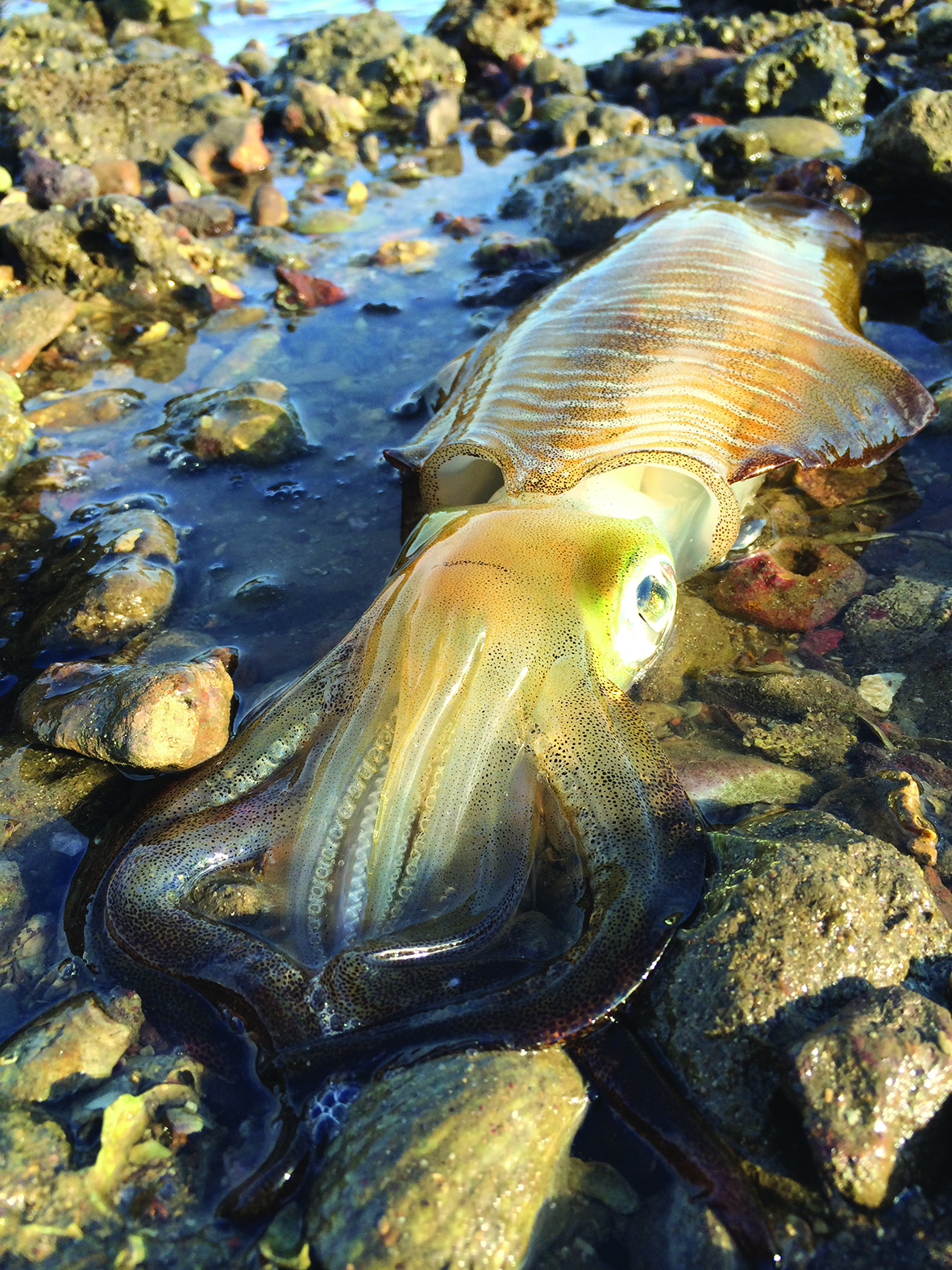 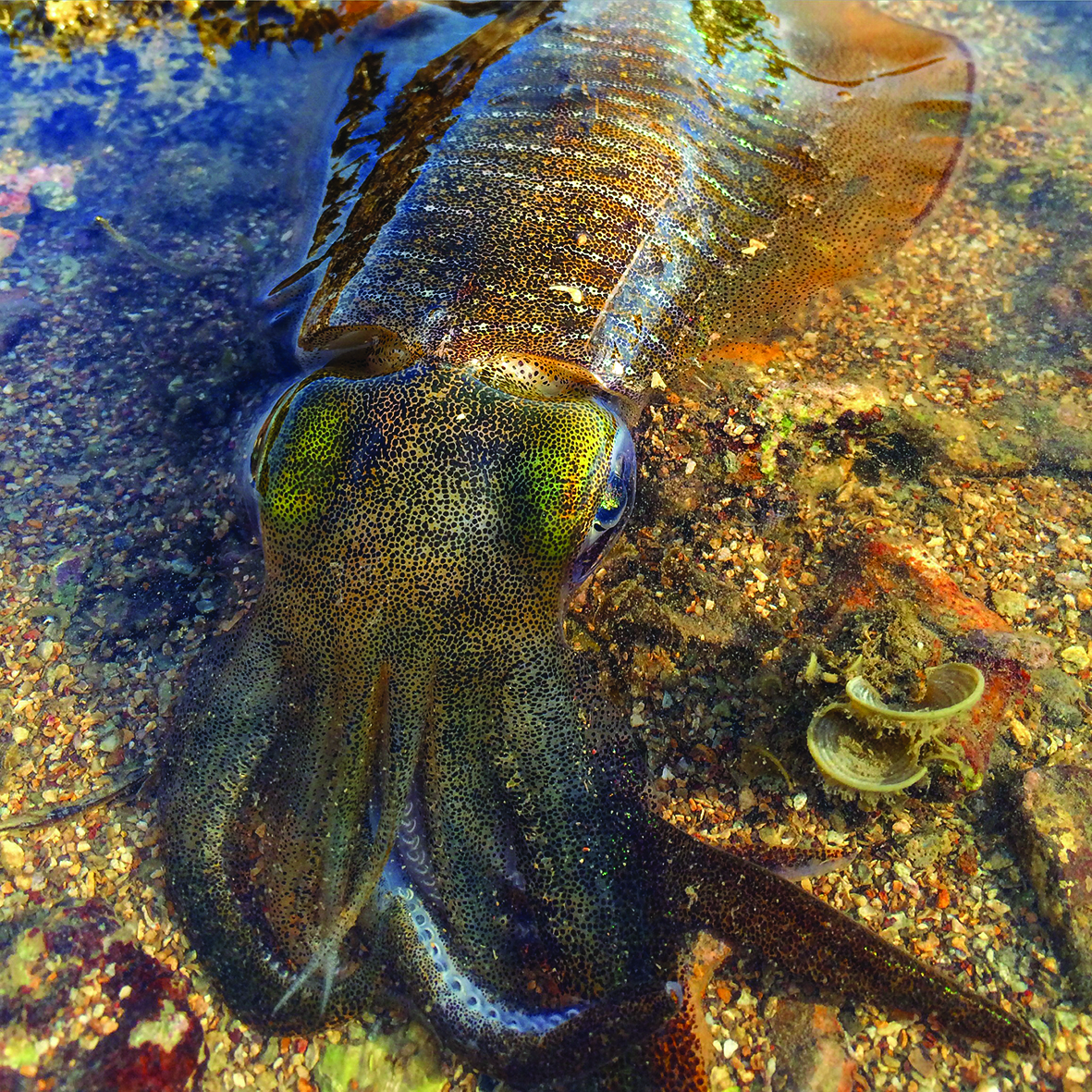 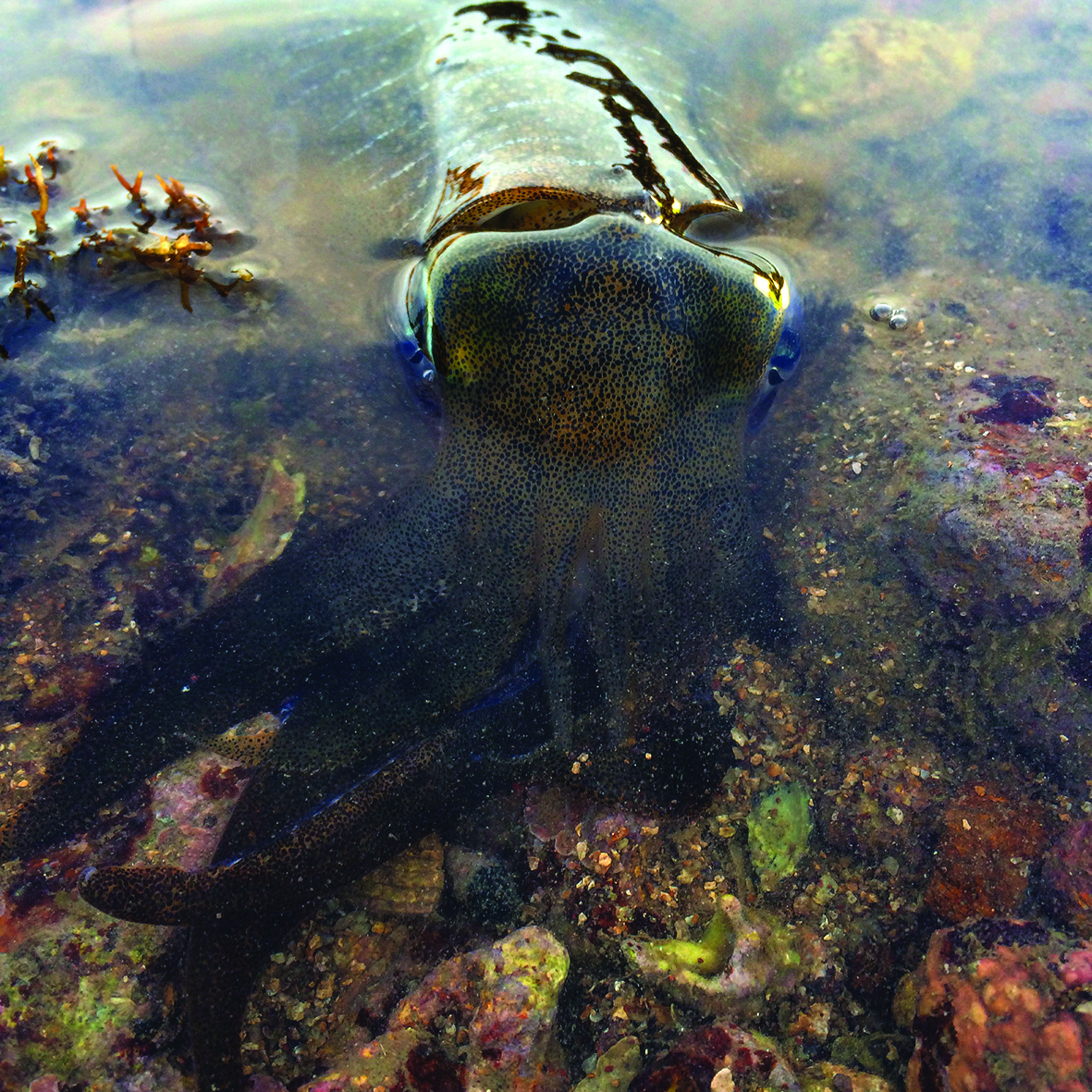 I have mentioned sight fishing in shallow water, and by shallow I mean don’t discount squid in 30cm of water at low tide amongst rocks and weed. Fish this very shallow water as you walk out to the deeper areas. If you don’t, you might spook the squid in the shallows and they will bolt away.

The squid that spook and bolt will be almost impossible to catch until they settle down. Each time that happens you miss the chance at a bite. In addition, they may take a few mates with them because they are social creatures and panic can spread.I’m speaking about daylight squid fishing because I would not for a minute recommend wading around rocks in the dark, though I have a suspicion it would be productive if you were OK with strange wet things crawling around your boots.

The squid that spook and bolt will be almost impossible to catch until they settle down. Each time that happens you miss the chance at a bite. In addition, they may take a few mates with them because they are social creatures and panic can spread.I’m speaking about daylight squid fishing because I would not for a minute recommend wading around rocks in the dark, though I have a suspicion it would be productive if you were OK with strange wet things crawling around your boots.
Also, and I say this every time I write about squid, make sure you put your squid on ice straight away. The number of people I see squid fishing and not icing their squid straight away surprises me as squid are near enough to being the most dangerous food source if not iced properly and looked after. They are great eating when dispatched upon capture and placed straight on the ice. As a general rule, when the squid goes pink and starts to smell like bait, it probably is.

Jason is a well-known and respected southeast Queensland angler with a wealth of fishing knowledge. He specialises in squid and deep-sea fishing and is full of helpful hints.
Previous Catching Sand and Mud Crabs on the Gold Coast
Next Cape York Fishing Options