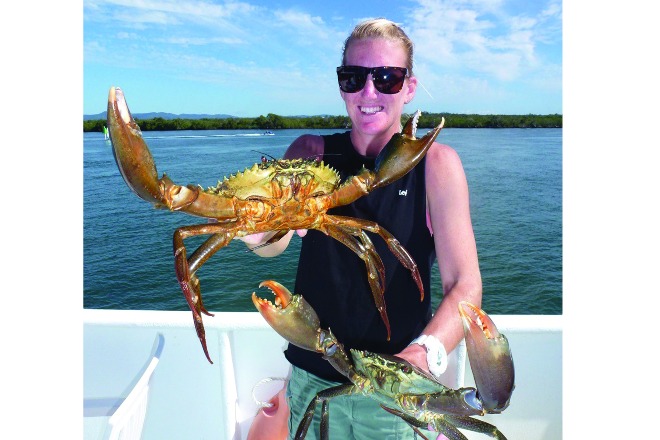 Some good muddies are still around, as Ali showed.

Catching Sand and Mud Crabs on the Gold Coast

HI everyone; we’re into the colder months of the year now and if the long-range weather forecasters are right, it may be a wet winter.

It certainly won’t have to be very wet for us to receive more rain than we’ve had during the first few months of the year. The lack of rain so far has meant lots of travelling to find fish.

No rain and a warm autumn has resulted in higher than normal water temperatures and good-quality mud crabs, sand crabs and whiting in the Pimpama River. The Stockyards area around the last green beacon in the river has produced crabs, and the stretch of river just past the Stockyards has been best for whiting on the run-in tide. Down at the mouth of the Pimpama, lots of crabs are being taken around the mangroves between the oyster lease and the river mouth. Unfortunately you’ll get plenty of undersize males and jennies among the better crabs.

The Aldershots area is still the best crabbing location for both sand and mud crabs. This month will see a few more caught. In the Coomera River, whiting and sand crabs are being captured at Santa Barbara, while down towards Paradise Point you’ll find better-quality whiting just upstream from Hope Harbour. Good size whiting have been taken near the green buoy opposite the northeastern tip of Jabiru Island. Bloodworms are the best bait and yabbies will work OK, however stingrays and catfish can be a problem at times for anglers using yabbies.

In the Broadwater, small but legal flathead will start to show up between the Aldershots and Crab Island. Yabbies, white pillies, 3” soft plastics and small hard-bodies will consistently catch flathead.

This month will also see bream numbers on the improve, with the rock walls at Paradise Point and the weed beds around Crab Island reliable locations. I often mention the weed beds and sandbanks around Crab Island north to the mouth of the Coomera River, and this is a very heavily fished area, but time and time again it produces good fishing when other areas do not. My favourite method is to use small surface lures such as Zerek surface walkers over the weed beds on the northern side of Crab Island and near the white posts south of the Currigee camping area on the inside of South Stradbroke Island.

These small surface lures will catch a number of species in this area, including anything from whiting to tailor, and it isn’t unusual to get four or more different species in a trip. The western side of Wave Break Island is also worth a try. If these long-range weather forecasts are right, the rain will be a good thing for our estuaries because it will force most of the baitfish back into the Seaway and the fishing will fire big time.

Winter is the best time to target jewfish in the Seaway, and if we get a lot of rain that dirties the water it will make for perfect conditions for catching big jew. Live baits will always be best but 5” and 7” soft plastics are also good choices. The first flush of clean water on the run-in tide presents the best time to fish, and snapper, tailor and GTs will also be caught in these conditions on live bait.

Unfortunately, tailor catches have been a little slow, both on our beaches and in the Broadwater, however reports of big numbers of tailor from northern NSW beaches mean they should turn up shortly. In the Nerang River, plenty of whiting have been caught during the day in the Sorrento and Carrara areas. Either tide is good but I have a slight preference for the run-out tide. The water always seems to be a little dirtier on the run-out and this makes the whiting a little more aggressive. Bloodworms and canal wriggler worms will be the best baits in this area.


Around the mouth of the Nerang, the underwater rock wall that runs from The Southport School boat shed to the mouth of the canal on the other side of the river is a consistent spot for a feed of bream. With three bridges now running across the river near the Sundale boat ramp, this is another good spot in which to target bream. All those pylons break the current and hold a lot of bait, presenting perfect conditions for hungry bream. Yabbies will catch the most fish in these areas, however the better-quality bream will fall to flesh and gut baits.

Offshore fishing has been a little patchy, with some quality snapper caught in the 35-40m area out from the Seaway by anglers float lining whole pillies on a gang of 4/0 Mustad 7766 hooks. If doing this, I always have a 5” white Z-Man soft plastic out the back sitting a couple of metres off the bottom. The wave motion imparts just enough action on the plastic for it to be smashed by the occasional big snapper. This may not appeal to fishos who like to work the lure, but there is nothing better than hearing the drag scream and turning around to see the rod buckled over from the weight of a good snapper. An early morning change of tide an hour or two after sunrise has produced the best catches and the fishing will just get better this month.

It’s taken a long time to finish but finally the four-lane boat ramp with plenty of car and trailer parking is open at the Broadwater end of Smith St. Hopefully this will take some pressure off the other boat ramps in the area during our busy periods. Early next month will see the running of the Rainbow Beach Family Fishing Competition. This event features great prizes for the whole family and is one of the few fishing competitions run during school holidays. ‘Til next month, fish for the future.

Wayne started fishing seriously 22 years ago, and 19 years ago moved to the Broadwater region on the Gold Coast because it had the best and biggest whiting in southeast Queensland, which is still true to this day. He works most Saturdays at Oxenford BCF and spends almost all the rest of his time fishing and crabbing the Broadwater and the rivers that run into it. Since moving there he has discovered that despite a lot of boat traffic it is still a great place to fish, with an amazing variety of species to catch.
Previous Country Fishing Classics Grand Final Results 2016
Next How to Catch Tiger Squid in the Shallows