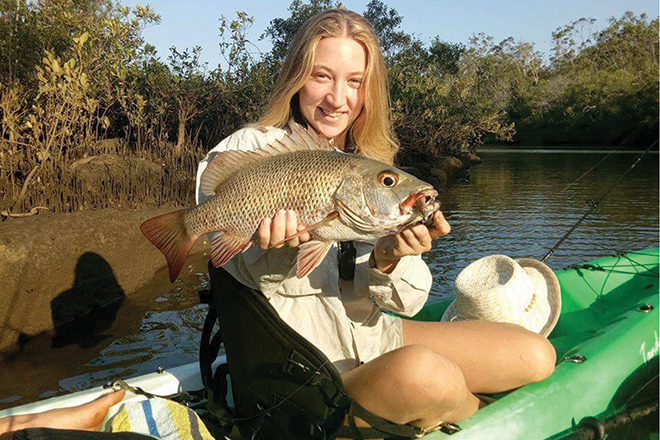 Catching mangrove jack from a kayak

BEING passionate about fishing often gives you the opportunity to go to epic places and see spectacular things.

My girlfriend Leeah and I both have a never-ending love of the outdoors, and particularly areas that feature water due to the scaly creatures that usually inhabit it.

A number of weekend trips away to top spots off the beaten track left us fishing land based and constantly wishing we could go further. So through a spontaneous recent decision to buy a second-hand tandem kayak, we quickly discovered how many more options were on offer. Having a means of getting on the water without the limitations of land-based fishing or towing a boat along the rough and rugged tracks that usually lead to the best fishing destinations was a win in our eyes.

Being able to throw the kayak on the roof of my ute and head into the unknown, going off no more than local insight and Google Maps, is something of a dream to me. The chances of things going wrong are greatly outweighed by the potential for an untouched fishing oasis sitting out there and waiting for us to paddle through.

Having put our kayak through its paces a mere hour after buying it, we were eager to get out and explore further abroad. We quickly realised how much having it as an option increased the number of places we could travel to and properly explore. The weekend after picking up our yak, my good friend Ross, Leeah and I put a plan into action, travelling almost an hour from Bundaberg to a small single-lane bridge on a backroad we had found using Google Maps.

Knowing this system had fairly limited access for boats, fishing the ‘skinny water’ far upstream seemed like an excellent way to find hungry fish. Coming into the warmer months, mangrove jack was our primary target species, so after skull-dragging Ross’s single kayak and our tandem down the steep embankment, we set off paddling upstream.

We didn’t have to go far to find good-looking territory with an abundance of fallen trees and mangrove-lined banks. We didn’t know what to expect when heading up the creek system, which was half the excitement, with sheer anticipation pushing us around every bend. It wasn’t long before we came across a shallow rock bar almost completely exposed on high tide, which was good news for us because we could then push beyond where any boat could.

We eventually came to a fairly wide pool with everything we could wish for: rocks, fallen trees and submerged snags. This area was bound to hold mangrove jack, and it wasn’t long before Leeah had her first encounter. Casting a snagless-rigged Z-Man SwimmerZ, she flicked her plastic perfectly under a branch and was almost instantly hit but didn’t hook up.

Soon after, we positioned ourselves just off a large submerged log where once again Leeah got smashed, this time right in front of the kayak. Sitting in the back seat and watching the action go down, I saw every bit of a 50cm jack come flying out from under the log to hit Leeah’s plastic, but frustratingly the fish still didn’t hook up.

Having cast in the same areas multiple times for no reward, I decided to change to a smaller curly tailed soft plastic rigged on a snagless hook in the hope something new would entice a bite. Positioning my lure deep alongside the log, I was in the danger zone. Bang, I was on! With my drag locked up, I wasn’t holding back as the fish powered under the snag, pulling us along with it. I had the fish turned and almost to the surface when with a flash of red it took one last run and wrapped me around a branch, freeing itself from my hook in the process.

We continued to fish but it seemed like the pool had been disturbed by my brutal encounter, so we turned around and decided to head the other way, back past where we had launched, hoping to find some more dirty-fighting jacks for us to try our luck against. We hadn’t paddled far before Ross hooked up.

Getting hit just as the lure landed on the surface, he managed to turn the fish away from its home and drag it into the safe zone and aboard his kayak. A beautiful jack measuring just shy of 40cm made for an awesome start to Ross’s day, so after a quick photo the fish was released to grow bigger and stronger.

We paddled on, coming across spectacular scenery and feeling as though we were deep in the wilderness, surrounded by rocky outcrops and vine-stricken tree lines. As the day wore on, I really didn’t seem to be having much luck after yet again hooking and losing another fish, this time pulling the hooks.

The light was slowly fading, so we proceeded to the next bend, knowing we had to call it quits soon. Another rocky embankment made for likely looking territory in quite a deep section of water, so we drifted along casting in multiple directions. All of a sudden, Leeah’s soft plastic was smashed just feet from the front of our kayak.

With a locked drag on only a light rod, she battled it from left to right, dangerously close to some shallow rocks. Right when we thought she had it under control, the fish would take another lunge for cover, but finally she had the fish beat. Having no landing net, I had to try my best to comfort lift Leeah’s very first jack onto our kayak.

All I could think of was the days, if not weeks, of grief I would cop if the hooks pulled as I attempted to land the fish, but luckily the hook was positioned well in the corner of the fish’s mouth, so over the side came an absolute cracker of a mangrove jack. We were ecstatic after an epic battle on just 8lb braid in very challenging conditions.

Measuring around 45cm, Leeah had caught herself a beautiful fish to introduce her to the thrill of jack fishing. The fish was released after some quick photos, and we hope to catch it again on our next adventure to the area. The creek began to open up and as darkness neared we decided to start our paddle back, fishing along the way of course.

We made it back to our cars just before sunset, unfortunately with no more jack encounters along the way, but we were stoked to have caught what we did. The day was primarily an exploratory trip, with any fish being a bonus. With another blank section of the map filled in, we plan to go back and fish further into the unknown, hoping to stumble upon more feisty specimens.

It’s amazing how much being down level to the water in a kayak changes your view of the places you’re visiting, not to mention how it changes your fishing methods. It’s an awesome, cost-effective way of getting out and exploring and I’m certainly hooked on kayak fishing!

Joel is blessed with the fish-rich coastline and waterways surrounding the Bundaberg region. With an array of options and possibilities around, he favours the shallow flats and small creeks and specialises mostly in lure fishing. Joel loves to broaden his abilities with new concepts and techniques, so feel free to email him at jmj-31898@hotmail.com
Previous Magical Lake Monduran barra
Next Jet ski fishing trip to Fraser Island