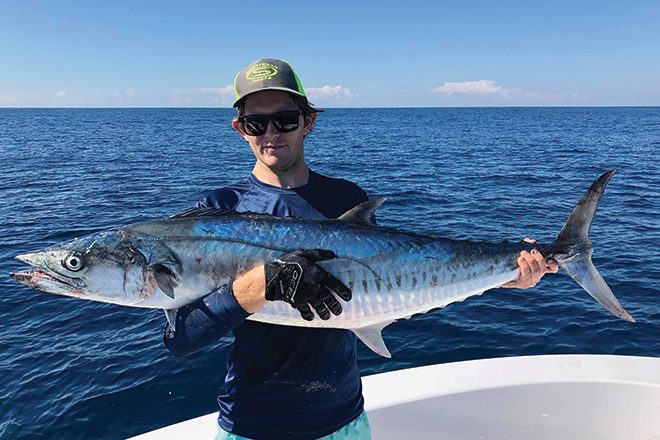 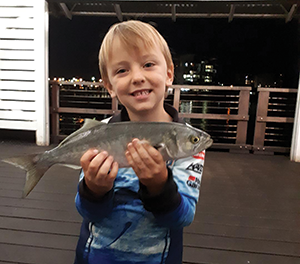 WE have had an incredible run of great weather over the past couple of months and I hope it continues for a while longer. classic

Like any serious fisho, any time Luke gets the chance to take his Sportsman boat out in Moreton Bay and play with some bruisers, he is out there. On one of Luke’s recent trips he took good mate Chris along to share the experience (and work the gaff) only Cape Moreton could offer.

Luke summed up what it is like to be on the water on a perfect day and with a best mate. “Just one of those days you live for and even better to watch your mate tick off his first topwater spanish and a solid one at that.” As you can see, Chris was more than just a little excited to be holding his PB spanish.

Luke continued the cracker day and was stoked to get a 20kg beast in the boat after several missed opportunities. A lot of runs, a lot of tackle lost, a lot mixed vocabulary but the guys still boated tuna, mackerel and a stonker snapper to top off another awesome day in Moreton Bay.

If you are chasing snapper closer to home, it would appear you do not have to travel far. Brandon did a lot of prospecting in the Moreton Bay area and ended up at Mud Island on his way home. Like most fishos down to the dregs of those kilos of bait we take out, he made one last stop, and one last cast, because you never know.

Then boom, a nice snapper was boated. He then asked himself: ‘Why didn’t I just come here in the first place?’ Well that is what fishers have always done, and I guess we will just keep doing it. A very nice Mud Island snapper Brandon, and I bet it’s a location that has been bumped up on the ‘go-to’ list for the next trip.

I have always said if you take kids fishing, they will always outfish you. Well Charlie and Zac certainly did an awesome job on Dad one recent night when they caught the awesome tailor pictured at Woody Point Jetty. Well done, boys!
Next time, how about teaching Dad how to catch fish like these?

I am pretty sure the last thing Tammy expected when she went out for a session on the water was to boat a cracker 64cm flathead. Well done, Tammy, awesome catch, you have earned bragging rights until the next trip! Jacqui also went home a with a very tasty feed in the form of a 36cm bream caught on the Shorncliffe Pier, which was an unexpected but welcome sight coming over the rails.

At 36cm, it was a good size, but the girth on the fish was awesome. A very solid model and possibly even two meals! Great stuff, Jacqui.

Gemma had a triple whammy one night while fishing the Redcliffe area. Not only did Gemma land a very nice 76cm jewie but she followed it up with two snapper, one coming in at 56cm and the other at 43cm. It is safe to say Gemma not only had a cracker night, but she also gave her cousin Albert a lesson on how things are done in style. Nice one, Gemma!

We are still getting a lot of great reports from the fishos chasing whiting. The key area has been the Sandhills at Moreton Island in both deeper and shallower areas, with good numbers and sizes coming in. The mouth of the Caboolture River has seen fishos going to get a healthy feed and the Cockle Banks have also been producing on live bloodworms and stripped squid.

A healthy reminder to a couple of lads who shall remain nameless: check the rope on your scaler bag before you head off home and you will have a feed at the end! I recently came across a photo opportunity you just can’t pass up – three young fishos Tyronne, Breaden and Xanthie all having a great morning with dad Gerry on our local pier.

It is so good to see more kids spending quality time doing what they love. As Gerry believes, “more tackle boxes and less Xboxes” is what the kids of today need.

Enjoy your time around the water!