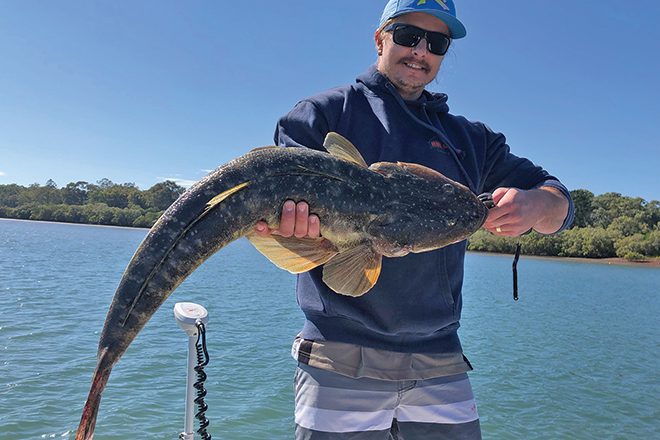 Roman with his PB 90cm crocodile caught on a Zerek Bulldog Crank. The fish of a lifetime for most people.

THIS month has been a bit of a mixed bag, with some days quite productive and others simply hard work.

The better fishing has occurred on the lead-up to the full and new moons in the shallows. One thing I have noticed is even with the right tides, the fish have been rather finicky. All the little things such as really clear water, changes in pressure and wind direction, snot weed and so on have been enough to put fish off the bite.

You can go to an area one day and not get in touch, then go back the next and the fish will chew the heads off. If you have areas that were producing fish, don’t give up on them, just keep coming back every couple of days and have a look because they may have decided to turn on.

The weather has been pretty good, so we’ve managed to get a number of charters out and a few tuition sessions to keep me occupied. My first tuition session was with Matt and we headed to Garden Island to chase flathead.

Because we were there on a certain size low tide, within the first two or three casts he had landed a 50cm-plus flathead. He caught a couple of smaller ones after that. I showed him a few techniques on how to manage his line a little better and control different types of soft plastics.

We then worked through the morning in a few different areas with different techniques and picked up several fish. Nothing fantastic but we had consistent bites all day long. My second tuition session for the month was with Terry.

We headed out early in the morning on a good low tide and visited the same locations where I’d caught fish previously. You may think that because I fished those locations before I took all the fish, but we practised catch and release every time, so I had a pretty good idea those fish were still there.

But try as we might with all the right techniques and right tide, we produced nothing. We trolled, we cast, we worked some rubble ground – nothing. We could see fish on the sounder, we just could not get anything to bite.

However, Terry still learnt the techniques and a few areas to go and check in future. Because it had been a pretty tough morning, I decided to stay a little longer and work the high tide. We trolled one area first for nothing.

Then I said to Terry we would go to one more area on the way home and we would have to call it quits.  We got all the lures prepared, popped them in the water and started trolling a couple of Zerek Bulldog Cranks along the mangrove line.

Terry’s lure was in the water for about two minutes and he got a solid hit. Line started screaming off the reel and the fish headed towards the mangroves. Terry panicked a little because he had lost good fish before by being cut off in the mangroves.

Luckily he got control of the fish pretty quickly, turned it and got it away from the mangroves. It was going to be a little tricky because the whole area was only about 70cm deep. The fish kept making long runs towards the mangroves but with a bit of boat work and good angling by Terry we managed to keep it away from the structure and get the fish close to the boat.

Because the water was so clear we could see this fish from the boat and could tell it was a very solid lizard.With the light line we were using, even trying to lift the fish off the bottom saw the drag running, so Terry had to be very patient.

The fish slowly swam along the bottom and we drifted with it. Terry said it was a pretty solid fish and all he could do was take his time and wear her out. Eventually she started to come to the surface, so I grabbed the net and realised it wasn’t as big as the fish I was attempting to land.

Luckily the flatty slid into the net nice and easy, rolled upside down and curled snugly into the net. I gently lifted the big fish out of the water and onto the wet deck. We got the brag mat out and she was Terry’s personal best at 90.5cm – a dead set crocodile.

Needless to say, Terry was pretty stoked. We got a couple of quick pics and put her back in the water unharmed to swim away and live another day. This just goes to show persistence pays off. We had a super-tough morning and then Terry got the fish of a lifetime in the last 10 minutes.

Well done mate, you put in the effort and were rewarded with a cracker. My next tuition session was with John and Martin. They had come out to learn a few different techniques for catching fish on rubble ground and flathead in the shallows.

This was one of those sessions where I wasn’t going to stop at an area I fished the day before. However, as we went past a particular area it looked pretty good, so we decided to have a couple of trolls and flick a few plastics and it produced a number of nice flathead.

The boys learnt a few new techniques and understood the reasons why a certain size low and high tide create the perfect scenario for targeting flathead. We then went and fished rubble ground, which produced tuskfish, tailor and squire by drifting with plastics and trolling hard-bodies.

We also did a bit of sounder work and I showed the boys how to use their new Lowrance TI 2. They learnt about structure overlay and side scan to find new areas, then the sonar and down scan to show if any fish are on the structure.

To finish the month I had a couple of my regular guys out for a charter. We worked a few areas and picked up undersize squire and tailor for the morning, which was a lot of fun with triple hook-ups aplenty.

The boys weren’t too worried about the size because they don’t take anything home, they are strictly catch and release anglers. We then went flathead fishing and picked up a couple of nice 50cm fish.
Nothing flash but still just chipping away.

We decided to fish one last area for the morning before going home. On the way to the area I had noticed the northwesterly wind had picked up and we were getting a bit of snot weed on our lures, so I went to an area I’ve never fished before simply because we would be out of the breeze and snot weed.

I don’t usually fish this bank because it isn’t exactly what I look for on low tide. It’s a bit too flat with no significant drop-off into the main channel. The boys had a couple of casts around a little rocky point that produced nothing, so I said we would have a quick troll before heading home.

We tied on Bulldog Cranks and needless to say they were the same colour as the one that caught Terry’s 90.5 cm crocodile two days before. Roman was actually using the very lure Terry hooked his fish on, so it had mojo.

The boys deployed the Bulldog Cranks and we started trolling. We wouldn’t have gone 20m and Roman’s rod buckled over and line started to come off his reel. At first it didn’t do too much other than create a very heavy weight.

We even said it might have been a snag. Luckily I had my electric motor in while we were trolling with the outboard so if we got a fish I could manoeuvre around easily. Suddenly the fish started making big long runs and peeling plenty of 6lb line while making the ATC reel sing, which is always a great sound.

Lee and I said it could’ve been a stingray and I told Roman if it was a lizard, it was a crocodile. The water was a bit dirty in this area and while Roman got it close to the surface it took off before we could get a good look.

Roman thought it was either a stingray or shovelnose ray, so at this stage there wasn’t too much pressure, just a bit of fun. After another good couple of runs, the fish came to the surface and yes it was a crocodile.

She started shaking her head violently trying to get the lure out and Roman said she’s going to cut us off. I just take your time and keep her head in the water to lead her into the net. She finally settled and I slipped the big girl in the net and put her on the wet deck.

After we got her on the brag mat Roman had his PB flatty at right on 90cm. What a cracking lizard.  Needless to say, he was absolutely rapt and after a couple of quick pics we got the big girl back in the water and she swam off strong and unharmed to live another day.

All I can say is two solid crocodiles in as many days – a 90.5 and a 90 – it doesn’t get much better for my fishing clients! I must say using quality lures such as the Zereks (and I don’t even upgrade the trebles, these lures are straight out of the box) as well as quality line, reels and rods from the Wilson range really helps us to land these fish and give my clients the fish of a lifetime.

And I can guarantee these were definitely not the same fish as they were caught roughly 5km apart. As we all know, we are time poor with our busy jobs and lives, so if you can learn more to optimise your time on the water, then why not?

Remember, knowledge is the key! Until next month, stay safe on the water.

If you’re interested in any of our off or on-water tuition classes or you just want to jump on a charter, don’t be afraid to give me a call on 0432 386 307, send me an email at seanconlonsfishing@hotmail.com or check out the Sean Conlon’s Fishing Charters and Tuition Facebook page.