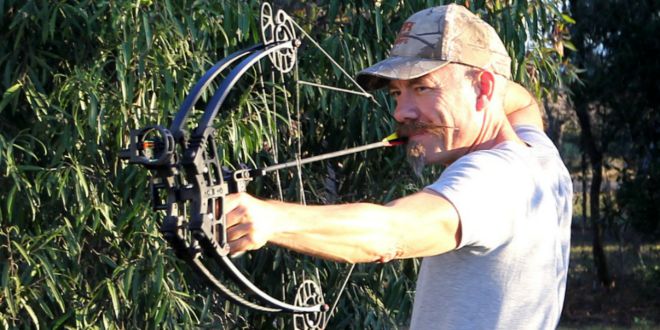 WHEN I first laid eyes on the SR Xtreme compound bow at the Australian Lure Fly & Outdoors Expo, I just knew I had to shoot it. The compact design was the first thing that grabbed my attention, but when I handled it so much more became noteworthy.

In spite of its diminutive appearance, the Xtreme is a full-powered bow with a rated draw weight of 50lb (yes, worldwide we still rate bows in imperial weights).

At just 54cm axle to axle, the SR Xtreme is much shorter than any compound bow of contemporary design. The first thing you notice when lifting the bow from its case is how light it is, coming in at a paltry 1.5kg complete with sights.

A moulded pistol grip feels very comfortable in the hand and brings the bow into a natural shooting position with no cant. The SR Xtreme is a true ‘shoot through the centre’ design, making it truly ambidextrous (though swapping from left to right-handed use will require adjustment of the sights).

After handling the SR Xtreme, I knew the only way to answer the questions in my mind about this radical design was to take it home and shoot it. Darryl Reeks Archery at Dinmore kindly supplied a loan bow for me to field test and after a familiarisation session in store, I was on my way with the Xtreme kit as it comes off the shelf.

The ‘ready to shoot’ kit includes the bow, fitted with a whisker arrow rest, peep sight, five-pin sight and D-loop. Also included are a padded case, handheld release aid, set of hex keys and a few carbon arrows. This is indeed a ready to shoot kit.

The draw cycle on the SR Xtreme is surprisingly smooth thanks to the large diameter and parabolic curve in the design of the cams. When the cams roll over to the ‘let-off’ stage to holding weight, there is no noticeable ‘hump’ as there is with more radically curved cams. This, along with the light, full-draw hold weight of about 10lb helps to make for a very pleasant shooting experience.

With the target set up about 15m away, I brought the bow to full draw and let the top pin on the sight hover on the bull before loosing the first arrow. There was very little (if any) noticeable vibration through the bow and it was very quiet too. Two more arrows followed, resulting in a surprisingly tight group about 20cm right of the bullseye and slightly low.

Using the hex keys from the kit, I made an adjustment to the sight and fired another trio of arrows resulting in the same tight group, this time closer to the bull. One more adjustment and the next group was smack on target, which was very pleasing because I had less confidence in my somewhat rusty archery skills than in the accuracy of the bow.

Moving back to 25m didn’t open up the groups too much, with all shots still in the kill zone on a fox-sized target. Following a couple of weeks of afternoon target sessions in the backyard to get my shooting techniques back to their old consistent levels, I was ready to take the bow on a hunt.


In the field
By pure chance, I had a road trip into the bush planned before I first saw the SR Xtreme bow. Naturally I took it along for an ideal opportunity to test it in real hunting situations.

It wasn’t until reaching the Mallee Country of the Victorian-South Australian border region that the first opportunity for a hunt came along. After securing local knowledge on a location, I fitted half a dozen arrows with Varmint Buster points. These nifty gadgets are essentially collars that fit behind a field point, turning a target arrow into a small game point.

The property we visited was alive with rabbits, with parts of it looking like an artillery firing range because of the number of holes. By about 2pm the rabbits started to emerge and not long afterwards arrows began to fly. The Xtreme was spot on whenever I did my bit and remembered to use the range finder.

The first bunny was hit precisely at the point of aim, in the shoulder, and the Varmint Buster must have stopped its heart on impact. Suffering from a bit of bunny fever, I missed the next one by shooting over its back. Three more were taken in the next three shots, proving that this little bow is no slouch in the field. Four dressed rabbits in the Esky were enough for a few feeds, so with mission accomplished I called it a day.

A week later and two states away in far-western Queensland, the opportunity to stalk larger game came along. This time feral goats were on the hit list in thickly vegetated scrub country out beyond Cunnamulla. The scrub on the block consisted mainly of emu bush and stunted acacias, all of which was low, peaking at about 3m, but very twiggy. Hunting here was challenging due to the limited visibility through the scrub and the difficulty in being quiet due to the amount of dry leaves underfoot.

Stalking in close enough for a bow shot was not easy; imagine trying to walk on corn flakes without making any noise. In a stroke of good fortune, thunderstorms rumbled through on Sunday night and dampened the undergrowth. Next morning, with the ground still damp, I managed to sneak in to within 15m of a small mob of nannies, kids and young billies grazing on the green pick in an open soak. I took aim at the closest small billy, an ideal eating goat, and drew the Xtreme back to full draw.

My palms were sweating with nervous anticipation but the light weight of the bow and light holding pressure at full draw made waiting for the shot very comfortable. Eventually, the billy turned broadside on presenting a perfect shot at its vitals and the Xtreme sent an arrow tipped with a fixed-blade broadhead on its way. As accurate with broadheads as with field tips, the little bow dropped the billy to the ground, lights out.

A quick photo was snapped before I removed the legs and backstraps for the camp oven, then hiked back to the vehicle.

There’s no doubt the SR Xtreme performs as well in accuracy and speed as many contemporary compound bows on the market. Its light weight puts it ahead of the game in that aspect, meaning it is great for long walks such as we often endure when bowhunting in Australia.

Applications where the Xtreme will shine include hunting in thick bush, from a tree stand or from a blind.

In my early bowhunting days (too many years ago to admit), a favourite tactic was to sit on a waterhole, hidden in a patch of saltbush (or even galvanised burr) and wait for pigs and goats to come in to drink. The Xtreme would be the perfect bow for that scenario.

Check out the SR Xtreme at Darryl Reeks Archery in Dinmore (07 3282 2066) and like me, you’ll be immediately impressed.