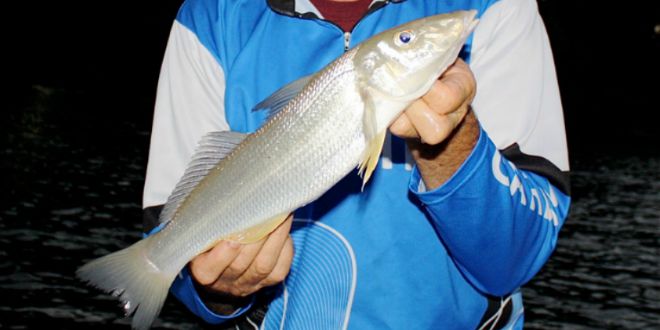 The Right Gear for Whiting

October is regarded as the start of the whiting season, with early numbers of whiting indicating another good season ahead. Whiting have such a long summer spawning season and the first thing needed is a couple of days of rain to flush the fish out of the canals.

Whiting anglers can be very specific about the gear they use. I would not only like to explain the gear used but also why we whiting anglers use it. Like most fishing nowadays, it is all the little things you do right that bring the results of catching fish consistently.

First are the rods used, which are generally 9’ to 10’6” in length. These soft-tipped rods will actually hook the fish by themselves but the softness in the rod blank maximises the breaking strain of the line, which lessens the chance of line breakage. The Gary Howard and Snyder Glas ranges of rods are the best you can buy for catching whiting as well as many other species.
Six-pound Schneider and 8lb Platypus Platinum are the preferred main lines, with a 6lb fluorocarbon leader. I always thought the fact that fluorocarbon is less visible in the water was its only advantage, but it actually sinks in the water, meaning it helps the bait stay on the bottom where the whiting are.

Large 3 and 4 ball sinkers with long traces are a big help too because these hold the bait in position and allow the whiting to feed without feeling any line resistance. Hook length depends on the bait you use.

If you prefer yabbies, then a size 4 long shank hook that allows the yabby to be presented in a natural flat shape, not curled up, would be best.

If, like me, you prefer worms, then a short shank size 4 or 6 hook is ideal because it is swallowed more easily and when using worms that’s where the bait should end up. I prefer the cheap SureCatch size 6 bait holders. There is no need to buy dear hooks when using worms for bait.

I’m sure we have all endured the circumstance where the fish has spat the hook on the way in. If the fish is gut hooked this never happens and it only takes a couple of extra seconds while watching the bite to allow it to happen. This leads us to the next part of fishing for whiting.

As a general rule, at least two rods per angler are used but never held. Holding the rod will mean the fish will feel some resistance on the line while feeding. This is not what the fish is expecting and it will normally stop feeding on your bait and look for an easier meal.

I realise these things may seem like only minor details, but trust me they can make a big difference in landing that elbow slapper of a lifetime.

The area between Isle of Capri and Chevron Island in the Nerang River is the best area for whiting at the moment, with late afternoon and early evening run-out tides ideal. In the Coomera River, the edge of the sandbanks in the Paradise Point area would be worth a try using small yabbies during the day. Ever since I moved to the Goldy I have been amazed at how well it fishes despite all the boat traffic and fishing pressure, and now that I am heading offshore a bit in the new Haines, things are the same out there.

We may not be scoring the numbers of fish they get on the reefs further north but we’re still capturing a good range of quality eating fish such as snapper, jew, moses perch and even the odd tuskfish.

The first thing those new to our offshore area will notice is the lack of any major structure, with no large pinnacles or big ledges to fish as in other offshore areas. However, lots of small gravelly and rocky areas hold good size snapper and other reef fish. The good part is many of the quality fishing areas are in close, making for easy access to some cracking fishing.


Float lining for snapper is an easy and very effective way to consistently catch fish, and when you’re trying to fish a new area or target a new species, keeping it simple is best. A 6-8kg rod, 5000-size reel loaded with 20lb braid and a 30lb leader make up the gear needed, along with a gang of three 4/0 to 6/0 hooks with swivels in between and a 3 or 4 ball sinker to allow your pillie bait to slowly make its way to the bottom.

I have been taking advantage of anchoring with the Minn Kota i-Pilot. This makes life so much easier when you miss your mark and have to move a few metres either way to find the fish.
No more pulling up a hundred metres of anchor rope and chain.

As with all forms of fishing, you have your good days and your not so good days, but it is all part of learning and that’s what keeps us coming back for more.
‘Til next month, fish for the future.

Wayne started fishing seriously 22 years ago, and 19 years ago moved to the Broadwater region on the Gold Coast because it had the best and biggest whiting in southeast Queensland, which is still true to this day. He works most Saturdays at Oxenford BCF and spends almost all the rest of his time fishing and crabbing the Broadwater and the rivers that run into it. Since moving there he has discovered that despite a lot of boat traffic it is still a great place to fish, with an amazing variety of species to catch.
Previous Female anglers dominate at Basstasstic Somerset
Next Compact SR Xtreme Compound Bow Review