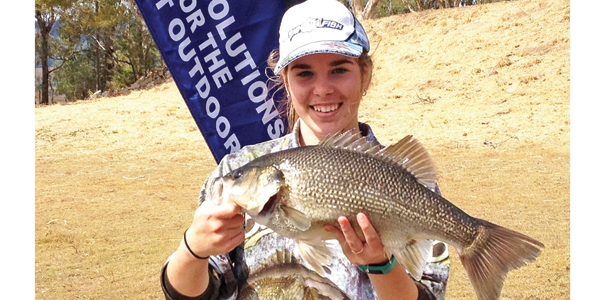 Aimee Thompson from Brisbane was the winning angler at the Basstasstic round 4 qualifier at Somerset Dam.

ROUND 4 of the Basstasstic Somerset individual bass fishing qualifiers was held at Somerset Dam on August 15 and 16.

The tournament was run out of Lake Somerset Holiday Park and a good line-up of anglers turned out, though not as many as normal due to rumours of the dam not fishing very well. Somerset is a big bass dam and the lure of catching your PB bass on the dam is always an attraction for anglers.

So with fog blanketing the dam on day one, cold anglers set out to prove the rumours wrong. Well the rumours were put to bed in no time at all as anglers quickly found bass and the tournament was on. The end of session one saw many fish come in, and while they were not the big bass Somerset is renowned for, they were still good size fish.

Session two saw Josh Evans take the lead, with Aimee Thompson from Brisbane in second, Barry Reynolds in third, Brittany Evans holding down fourth and Jack Day from Kingaroy not far away. Day two brought really thick fog and it was a slow start for all boats. Like the day before however, the fog soon cleared and the day was bright and blue.

It was a day to be remembered and what a great day for girl power. Aimee Thompson came home in a canter and won the tournament with a great bag of bass to total 1903 points for the weekend. In second was another female angler, with Brittany Evans scoring 1613 points. Aimee said her win was achieved thanks to the new Smak Smakos spinnerbaits. 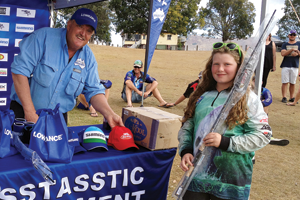 She cast the lures at the bank rather than focusing on the deepwater fishing Somerset is known for. Aimee won $500 cash and a Trevor’s Leathers keyring with the winning total engraved on it. Brittany put her second-place success down to using Smak Ice Jigs in the deeper water, and she won $300 cash for her efforts.  Third place and $200 cash went to Jack Day with a score of 1471 points.

Fourth was managed by Gavin Lightbody with a score of 1457 points, earning him $100 cash and an Evakool icebox. Josh Evans came fifth with a score 1361 points and he won $100 cash. Sixth place was secured by Steve Otto from Brisbane with 1337 points. Steve won a 42-litre Evakool icebox.

Barry Reynolds totalled 1308 points and took home a Shimano 3Zero rod.  Eighth went to Michael Thompson from Warwick thanks to his score of 1274 points, scoring him a Berkley lure pack. Brett Blissner from Kingaroy came ninth after scoring 1226 points, and he walked away with a Smak lure pack. Rounding out the top 10 was Jamie Facer from Brisbane with 980 points, which earned him a Shimano rod.

The Big Bass cash pool, an Evakool icebox and a Trevor’s Leathers keyring went to newcomer Matthew Hanson from Brisbane who wrangled a cracker 501mm to the fork bass. Junior angler Emma Wojtasik from Nambour won the junior section, which made it an all-girl affair for the top spots over the weekend. Emma tallied 919 points and won a Shimano Catana rod.