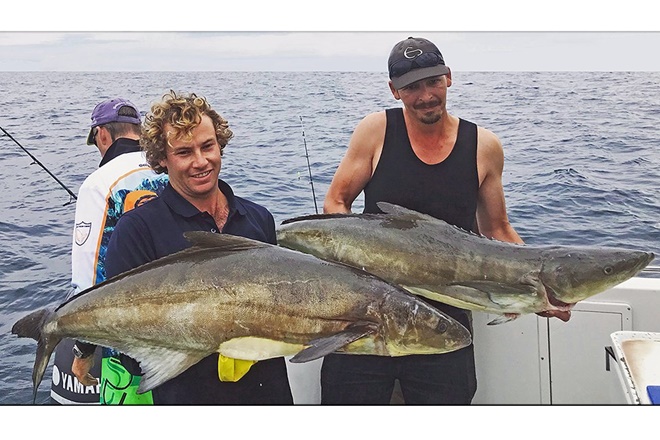 In the river the bream are in great numbers. Larger fish have been taken around the river mouth and the Noosa Sound as well a good sized fish right the way along Gympie Terrace and the Tewantin Area. A great option is to fish unweighted soft plastics, cast to the edge of the shadow line of pontoons and jetties these fish dart out and take the more natural looking falling baits, most successful have been the prawn profiles like Zman Shrimpz and Squidgy Pro prawn in the paddle tail, don’t forget the fluorocarbon leader. For the bait anglers give fresh mullet strips, prawns, frog mouthed pilchards, white bait and hardy heads a go. Flathead have also been plentiful with a lot of oversized fish taken over the past week. Soft plastics and trolled hard body lures have claimed some great fish. Fishing the run out tide and working the drop off and sand banks were the big momma love to sit is the best bet. Golden Trevally and tailor have been in great numbers, local anglers have seen plenty of golden trevally on both bait and soft plastic this week, big eye and giant trevally have also been in Woods Bays, make sure you keep an eye out for the surface action and have a rod rigged with a popper ready to cast. Mangrove Jack are still in the lower estuary and between the lakes. Live baits have been getting the job done, for the lure anglers; the new Berkley Shimma Shad, Jackall Squirrel 79SP suspending divers rigged on 20lb YGK fluorocarbon leader has been working well around the rock bars.

We are starting to see some good tailor moving up the beaches at the moment, schools aren’t big but there has been some quality fish amongst them. The Noosa River mouth and the Noosa Northshore has been really starting to fire and with the winds dropping conditions were nothing less than perfect this week. Good tailor were landed in the deeper gutters with the high tides the most productive. Pillies were the bait of choice as well as mullet and bonito fillet. Large winter bream were also in the mix with fish report up to 35cm. For the younger anglers there have been some good dart and whiting in the closer gutters with both species taken on beach worms and pippies. With the new moon last Wednesday plenty of jew anglers were out fishing the evening tide, large live baits on slider rigs have been perfect for the job.

With the wind up for a couple of days last week, a lot of anglers opted for the closer reefs, but as the breezes and swell dropped and we saw conditions improve, many larger boats did the run out to the outer reefs.  Starting with Sunshine Reef, a good mixed bag of reefies were landed including, squire, maori cod, sweetlip, jew the odd tuna. Jew Shoal also fished well for pan sized snapper and sweetlip. With the closer reefs been the focus of most a berley trail is a must as well as using larger baits, if you use only smaller sized baits the smaller fish will pick the hooks clean before the larger fish get a chance to have a go.  Chardon’s Reef has been productive with snapper, pearlies, moses perch, sweetlip, spanish mackerel and tuna. Reports from North Reef include Cobia, Spanish mackerel, Pearl perch, Moses perch, snapper and tusk fish, on the outer reefs like the Hards and Barwon Banks, we have are seeing  big amberjack, larger snapper, pearl perch, big cobia, kingies and some serious cod.

In the Fresh; Good Bass and small saratoga have been hanging around the drop offs, weed beds and shallow weedy edges. Surface walkers and frogs cast at these areas in the early morning and late afternoon have produced some nice fish. The new Chasebaits Bobbin frog is sure to be a hit and is made out of the 10x material to resist those big hits. Micro jigs and deep diving lures are working well when fished slowly through the schools.

Now for all the  latest information log onto www.fishingnoosa.com.au, for up to date bar and fishing reports, don’t forget to drop into Davo’s Tackle World, Davo’s Boating and Outdoor in Noosa and  Davo’s Northshore Bait & Tackle at Marcoola to find out where the fish are biting, and remember Tight Lines and Bent Spines!