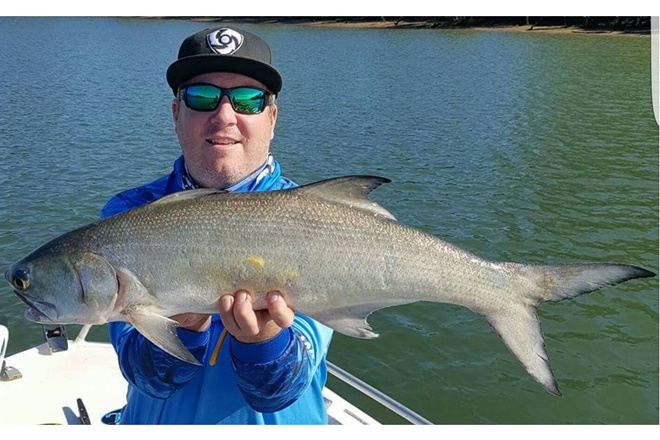 Tim Mulhall with the cracker blue salmon he caught on a Blade lure in the Burnett River recently.

Offshore fishing awesome out of Bundaberg

How awesome was the offshore weather around the Bundaberg region during this past week?  This did allow plenty of boats to head well offshore, and everywhere from the gutter, to the islands and out to the shelf all fished really well.  Most of the gutters produced some quality parrot, grass sweetlip, cod and the odd trout.  Out around the islands there was plenty of red emperor, trout, red throat, parrot and a few green jobfish.  Out over the shelf there was plenty of bar cod, ruby snapper and some cracker pearl perch.

All the inshore grounds fished well in the good weather, with a few grunter and grass sweetlip being caught off the bottom, and plenty of school mackerel and a few big Spanish mackerel being caught on the surface.  Also, out from the mouth of the Burnett River has seen a good number of winter whiting, so this will be well worth a try.  Using the fake worms by Berkley has been the best bait for the winter whiting.

The Burnett is fishing amazingly well, with winter whiting at the mouth, big bream along the rock walls, grunter on the gravel beds and plenty of sand whiting and flathead on the sand flats.  There are heaps of small trevally and small queenfish getting about and these are awesome fun on light line.  But, the talk of the town is the blue salmon with heaps of them getting about.  Some of them are up to 80cm long and they fight well and taste really good.  Most of the blueys have been caught on Blade lures.

Both the Baffle and the Kolan are fishing really well with plenty of queenfish and trevally around the mouths, as well as a few tailor.  There has been a few flathead and whiting on the flats and a few quality grunter out of the main channels.  A few jacks have been coming off the rock bars, but with the cooler water temperatures it seems that live-baiting is the way to go.

The trusty old Elliott is producing the goods with a decent number of whiting and dart around the mouth.  Plenty of bream and cod around the rocky areas and an odd jack out of the snags.

There has been a few good bass come out of Lake Gregory this week, with some quality bass being caught off the surface early, and then on Spinnerbaits up in the timber as the day goes on.

It’s also been a good week up at Lake Monduran, with barra up to 80cm being caught.  Most have come from around the “B” section of the dam.  Again, most of the barra have been caught on small lures and soft plastics.